Intel Corp.’s NGPTIM [next-generation polymer thermal interface material], which was supposed to bring back record overclocking capabilities to the company’s processors is better than its predecessor, but is significantly worse than commercially available thermal interfaces, a new research has found out.

Earlier this year Intel Corp.’s promised that its Core i7-4790K and Core i7-4690K “Devil’s Canyon” microprocessors will have considerably better overclocking potential compared to the original chips based on the “Haswell” micro-architecture released last year thanks to improved thermal interface between the die and the heat-spreader as well as revamped power supply circuity. However, actual overclocking attempts of a Core i7-4790K central processing unit by KitGuru’s reviewer Luke Hill did not reveal any breakthroughs. Apparently, the reason for that is quite simple: the new thermal interface that Intel uses still has limited efficiency.

All Intel processors for desktop computers in the recent 15+ years have featured heat-spreaders (which many call lids) on their dies to protect the latter from damages and enable more efficient heat dissipation. Back in the days Intel soldered dies to heat-spreaders using a special Indium-based alloy, which enabled very efficient transfer of heat. However, starting from the code-named Ivy Bridge microprocessors Intel replaced the solder with a layer of thermal paste, which is considerably less efficient than the previously used alloy.

Many overclockers complained that in order to unlock maximum overclocking potential of the Core i7-3770K and the Core i7-4770K microprocessors they had to remove the heat-spreaders (de-lid the chips) and change thermal interface. With the latest “Devil’s Canyon” central processing units Intel started to use a new substance called the NGPTIM, which is more efficient than its predecessors. However, a research conducted by 3DNews web-site has revealed that the NGPTIM is far less efficient than even affordable thermal pastes available on the market. 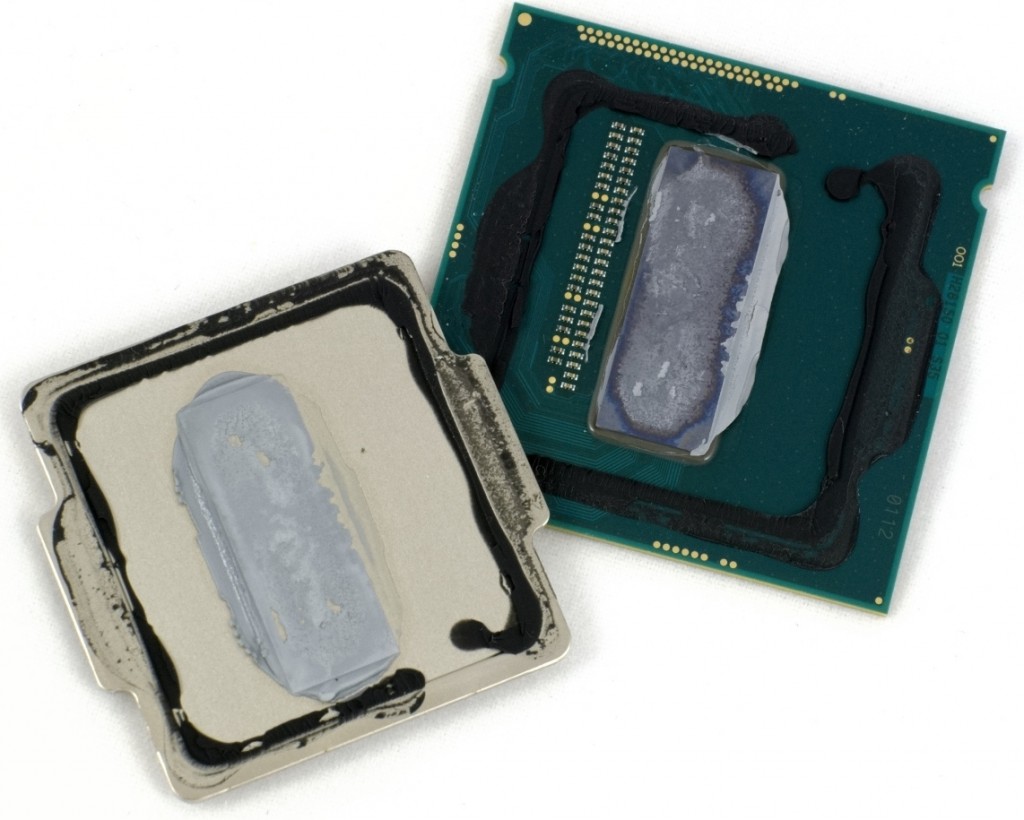 In a bid to test efficiency of the NGPTIM, Ilya Gavrichenkov, a renowned microprocessor expert, removed the lid and switched Intel’s NGPTIM with different thermal compounds. During the tests the base frequency of the Core i7-4690K processor was increased from 3.50GHz to 4.20GHz, the VCore was set at 1.2V and the TurboBoost 2.0 technology was disabled. The microprocessor was cooled-down by the Noctua NH-D15 cooler. The CPU temperatures were measured under two types of load: Extreme (created by AVX2-supporting LinX 0.6.5 stress test utility) and Typical (created by Freemake Video Converter 4.1.4 video transcoding software).

In both cases Intel’s NGPTIM could only outperform KPT-8 (an old thermal paste developed in 1974 in the USSR) paste and was less efficient than inexpensive Arctic Cooling MX-2. Highly-efficient Coollaboratory Liquid Pro compound proved to be dramatically better than Intel’s NGPTIM. 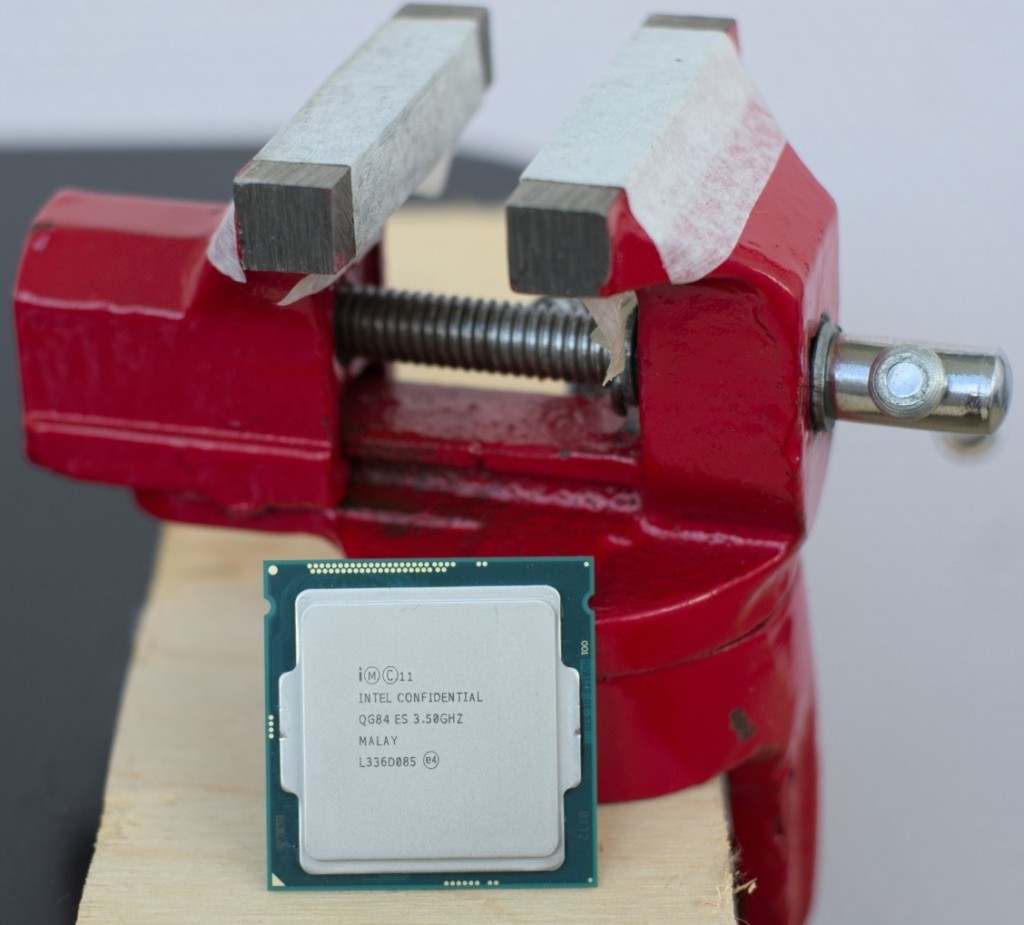 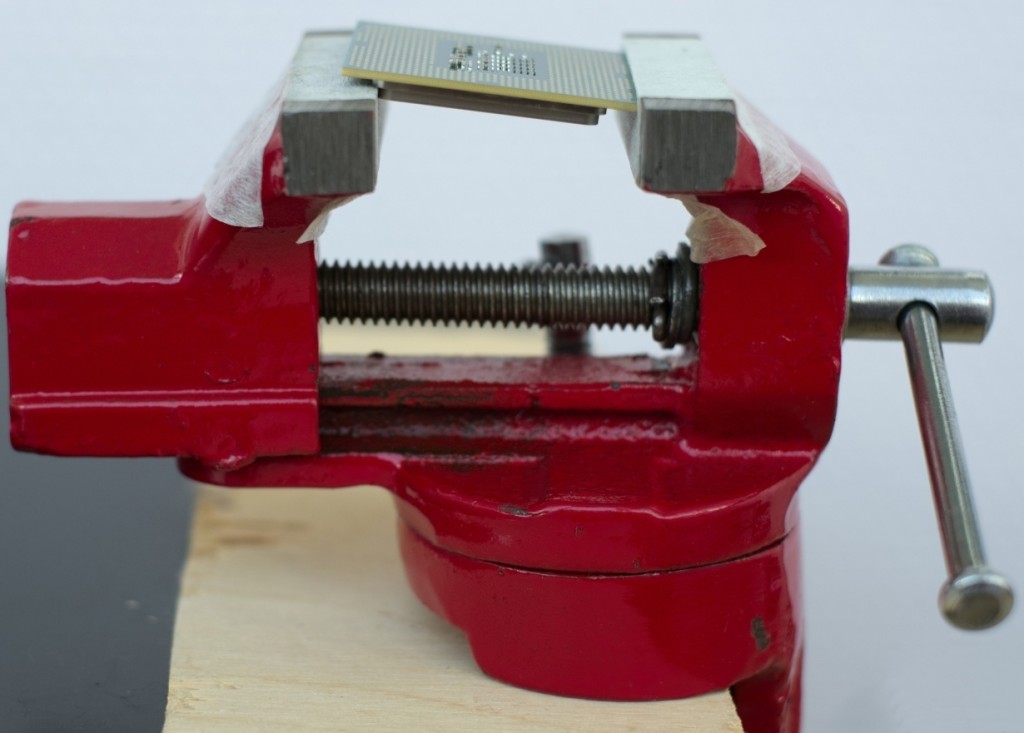 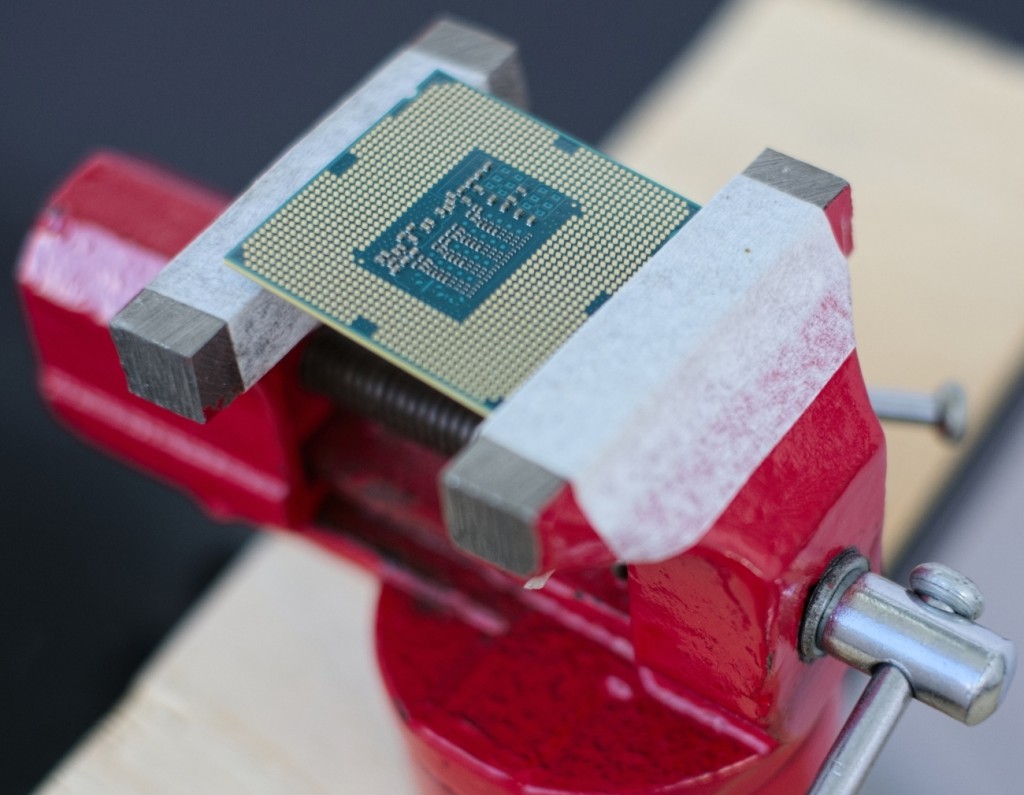 The web-site proposes an interesting way to de-lid a processor using a bench-vice.

In other words, if you want to get maximum from Intel’s “Devil’s Canyon” chips, remove the heat-spreader and switch the NGPTIM with something better. While you will definitely lose warranty, you will finally get something that could be comparable to a good-old Sandy Bridge running at 5GHz.

KitGuru Says: It is noteworthy that even with a new thermal compound the Core i7-4690K still did not skyrocket to 5GHz. Looks like modern micro-architectures are not really tailored for extreme overclocking…