Ubisoft doubles down on Stadia, adding three more games to the service

Google Stadia hasn’t received the most warm response since its release back in November 2019. Despite this, Ubisoft is continuing to support the service, recently announcing that three more of the publisher’s titles would be coming to the service. The games in question are Tom Clancy’s The Division 2, The Crew 2, and Monopoly. These games join a number of other Ubisoft titles already available on Stadia such as Assassin’s Creed Odyssey and Just Dance 2020.

Ubisoft have been a supporter of Stadia since its first announcement back at GDC 2019, where Assassin’s Creed Odyssey was used to showcase the claimed strengths of the streaming service. It is therefore not surprising to see the publisher continue to support Stadia, despite its current reputation. Furthermore, some of the games being added will take advantage of Stadia’s more ‘unique’ features.

Arriving on the 17th of March, The Division 2 will take advantage of a number of Stadia’s features. Launching with the recently released ‘Warlords of New York’ expansion, The Division 2 will be the first Stadia title to feature both cross-play and cross-progression. This will be done through Ubisoft’s Uplay service. Furthermore, the game will feature Stadia’s ‘Stream Connect’ function, which allows you to “stream your teammate’s viewpoints onto a single screen”. Stream Connect was announced as one of Stadia’s USPs, though the feature wasn’t available at launch, instead arriving a month later in December, with one of Ubisoft’s other titles – Ghost Recon: Breakpoint. Still, it’s nice to see one of Stadia’s more standout features being implemented into more titles. 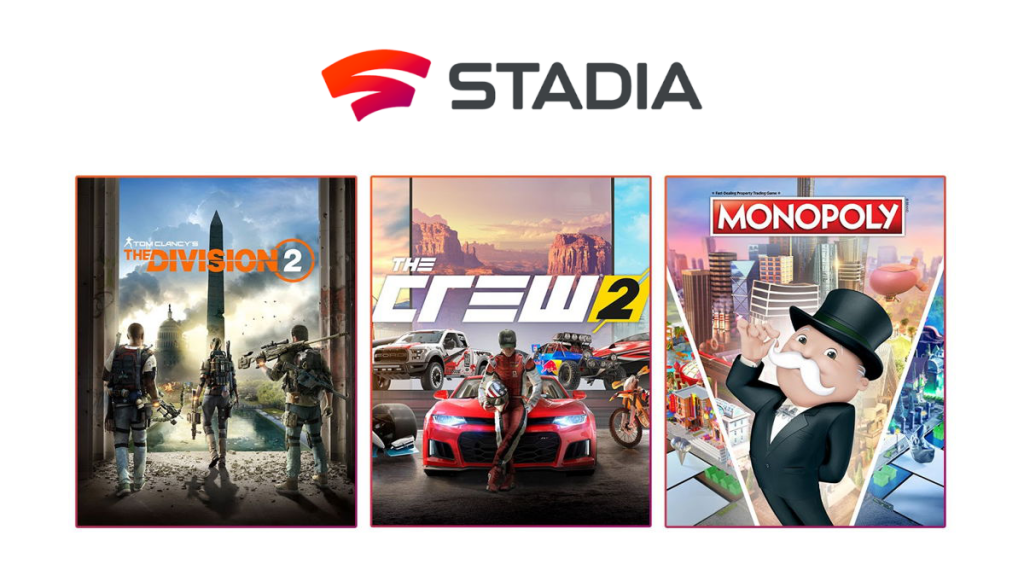 The second game announced to be arriving soon is The Crew 2. Arriving on the 25th of March, this 2018 open-world racing title allows you to take control of multiple vehicle types, from cars to boats to even planes. Though not the newest nor the most highly regarded title, The Crew 2 serves as the only open-world racing game on the service, offering users who enjoy those experiences to now have them on Stadia if they so desired.

The final game announced to be joining the service is Monopoly. A game which needs little introduction, Monopoly appears to be a suitable fit for the service in its current state, as due to its style of gameplay, even the slowest of internet speeds should be able to handle this title. Monopoly will join Stadia on the 28th of April.

These are all the new games announced by Ubisoft to be joining the service in the near future, though we already know that some of the publisher’s future titles will arrive upon their release – such as Watch Dogs Legion. Though none of the three titles set to join the service can be described as ‘new’ it is promising none-the-less to see Stadia’s library being fleshed out more.

KitGuru says: What do you think of these additions? Do you think any of them will benefit from being on Stadia? What other studios would you like to see add their games to the service? Let us know down below.