Until now, Intel Corp.’s success on the market of Google Android-based smartphones and tablets has been pretty mediocre since x86 microprocessors could not bring a lot of advantages to mobile devices. However, Intel’s latest system-on-chips support 64-bit processing capability, something no one else can offer for Android. Moreover, Intel has developed its own 64-bit Android kernel for OEMs to use.

The world’s largest maker of microprocessors has completed development of a special 64-bit version of Google Android 4.4 “Kit Kat” operating system; the software is ready to be loaded onto tablets based on Atom “Bay Trail” system-on-chips as well as forthcoming smartphones powered by Intel’s code-named “Merrifield” application processors. According to a report from Computerworld, Intel hopes that developers will start to write applications for Android that take advantage of its 64-bit system-on-chips.

Current tablets based on Intel Atom “Bay Trail-T” platform run either 32-bit Google Android or 64-bit or 32-bit Windows 8 operating systems. Manufacturers will have to verify the new operating system with their designs before releasing new gadgets to the market. It is generally projected that the first tablets based on 64-bit Google Android and Intel’s 64-bit chips will hit the market in the first half of this year.

It is logical to expect Intel to talk more about 64-bit technology for mobile devices at the Mobile World Congress trade-show in February. It is expected that the chip giant will formally unveil its next-generation system-on-chip for smartphones code-named Merrifield at the MWC as well. The first smartphones powered by the application processors will likely emerge in the second half of the year.

Intel demonstrated the world’s first tablet based on 64-bit Google Android operating system and its Atom “Bay Trail-T” platform last November at its annual meeting with investors. The company said back then that 64-bit processing technology could speed-up performance in numerous applications by 20% – 44% provided that apps take advantage of 64-bits (note that Intel demonstrated advantages in Windows 8.1 environment). 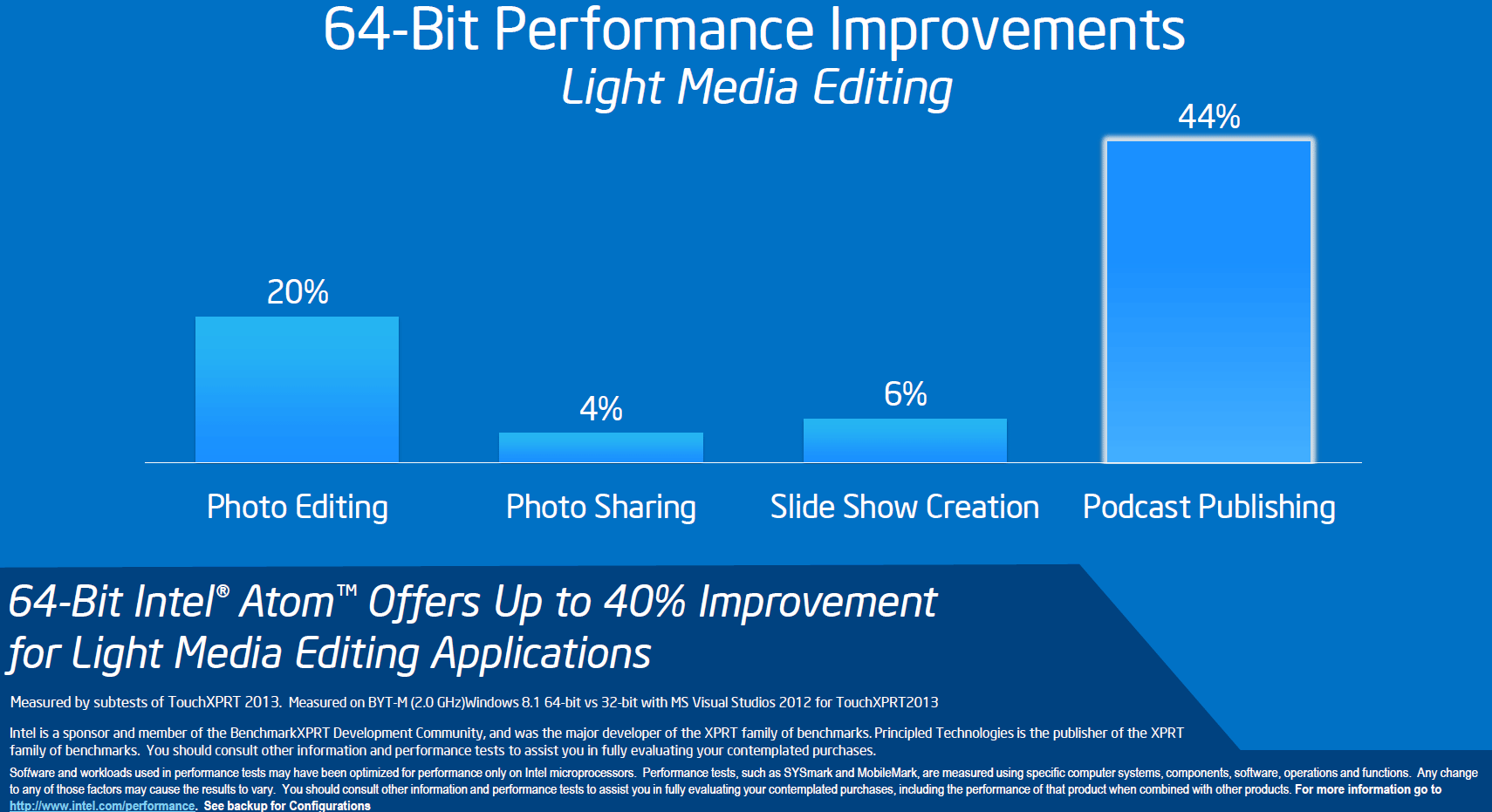 At present only Apple iPhone 5S, Apple iPad Air and numerous Windows-based tablets support 64-bit processing capability among ultra-portable devices. Due to the fact that 64-bit is becoming a selling point on the market of mobile gadgets (thanks to Apple’s A7 64-bit processor), Intel and its partners will be able to offer a unique capability in the Google Android universe.

KitGuru Says: Intel has done a great job developing 64-bit capable mobile chips and building its own Android 4.4 kernel with support for 64-bits. The only question that now remains is when software developers release their apps that take advantage of 64-bit application processors?