Samsung Electronics on Monday introduced the world’s first smartphone based on the Tizen operating system. The new Samsung Z smartphone will help the company to lower its dependence on Google Android platform that powers the majority of Samsung’s handsets and tablets. The Tizen will also aid Samsung to offer unique features not available from other developers of the Android devices.

The Samsung Z smartphone is based on a quad-core Intel Atom system-on-chip (since Intel helps to develop the Tizen OS, its chips support the Tizen OS) and comes with a 4.8” Super AMOLED display with 1280*720 resolution. The handset features 2GB of RAM, 16GB of NAND flash storage, 802.11 a/b/g/n Wi-Fi, Bluetooth 4.0 BLE, USB 2.0, NFC, an accelerometer, a gyroscope, a compass, a barometer, an ambient light sensor, a fingerprint scanner, a heart-rate sensor, a 2600mAh battery and so on.

Samsung claims that the new smartphone based on the open-source HTML5-based Tizen operating system “delivers a fast, optimal performance” thanks to improved memory management. The product features smoother scrolling and an improved rendering performance for web browsing, the company said. Among the exclusive features of the Samsung Z there is ultra-power saving mode that lets the phone stay operational even at minimal battery levels in emergencies. 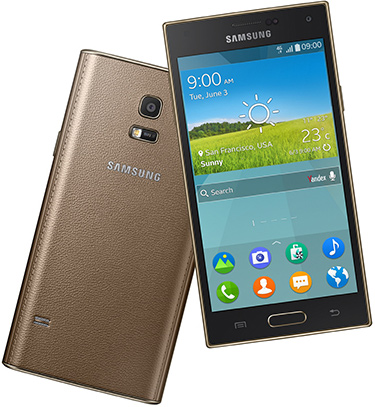 The device sports a slim, angular design with sophisticated lines, providing a distinguished look and feel while preserving Samsung’s overall design identity. The Samsung Z will be available in two colors: Black and Gold.

While the Tizen operating system has potential to offer various exclusive capabilities only available from Samsung, it should be noted that at present there are not a lot of apps designed for the platform. As a consequence, owners of the product will not be able to buy a lot of software, at least initially. In a bid to encourage more developers to join the Tizen ecosystem, the Tizen Store will provide a special promotional program to all developers for one year.

The Samsung Z will be available in the Q3 in Russia and is planned to expand to other markets. The price of the handset is unknown.

KitGuru Says: It looks like Tizen is finally ready to enter the market with the Samsung Z. What is unclear is how successful will the Tizen be. Without a proper choice of software the Samsung Z will barely be popular. However, if the price is right, maybe the smartphone will become an interesting entry-level product…