It seems that Apple is looking in to fortifying the displays found on its iPhones in order to tackle one of the biggest problems with smartphones- shattering screens. The company recently filed a patent idea that would use retractable bumpers that will automatically pop out when a device begins to fall. The patent itself is titled “Active screen protection for electronic devices”.

There would be a sensor inside of the iPhone that would detect a drop, from there, these bumpers would deploy on each corner of the screen in order to keep it from hitting the ground. 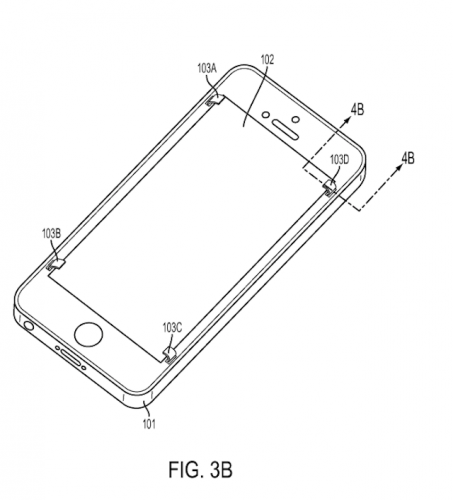 The bumpers themselves could be made out of plenty of materials, though they would need to be able to absorb shock in order to protect the phone screen properly. This is just an idea for now, since there is no evidence to show that Apple is implementing it in to a new device, but it is still good to see what is being worked on and tested behind closed doors.

This could end up being part of next year’s iPhone redesign, we are also hearing rumours that while Samsung may have been taken off of chip manufacturing duties, it may supply Apple with the screens for the iPhone 7.

KitGuru Says: I’ve not shattered any of my phone screens but I know plenty of people who have. Would you like to see smartphone makers focus on making screens ‘shatterproof’?

Previous Win a game of your choice with your best screenshot!
Next The Witcher 3: The Wild Hunt wins five Golden Joystick awards