It seems that Apple may actually launch its larger 12.9 inch iPad Pro this year, with a release date currently set for mid-November, just in time for Christmas, according to new reports. The iPad Pro has been foreshadowed for some time, with many expecting it to be pitched as a better tablet for business use with new multi-tasking features available.

The iPad Pro will be a fair bit larger than current generation iPads, sitting at around 13-inches in screen size, making it about as big as some laptops. According to DigiTimes, Apple will have suppliers ramp up production of these units in September, which will lead to units on store shelves in November. 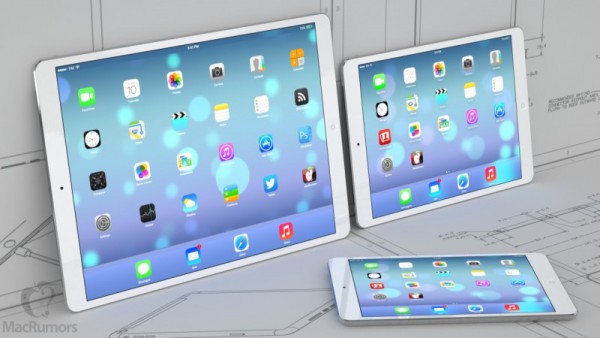 Apple usually announces its iPad refresh alongside new Macbooks at an event in October, around one month after the annual iPhone announcement. If Apple is going to begin selling the iPad Pro in November, it would likely be announced ahead of time at its annual October press conference.

Apple is being cautious when it comes to ordering stock for the iPad Pro, suggesting that the company isn't too sure how well the device will be received or if it will sell as well as other iPad models. The screen will apparently sport a 2731×2018 resolution, with iOS 9 set to bring new features to make use of the extra screen space.

KitGuru Says: The iPad Pro has been expected for quite some time now but we have yet to see it for ourselves. If this report is to be believed, then it would seem that Apple is unsure just how successful this device will be, which isn't surprising as the iPad line up is starting to look a little crowded with the Mini, the Air and now possibly the Pro.