Earlier this year, Razer launched a new lineup of Blade laptops in the 15in form factor. These had slimmer bezels, updated hardware and an overall squarer design than the previous Blade laptops. Now, Razer has essentially done the same thing for its Blade Stealth 13 series, with the thin and light laptop line getting a design overhaul and new hardware which brings the range right up to date.

The first thing you will notice about the new 13in Blade Stealth is the new design. Gone are the curvy edges and thick bezels. Instead, we have a laptop that is essentially a scaled-down version of the very modern-looking Blade 15, which we reviewed earlier this year. These changes have also reduced the overall footprint of the device, with the dimensions coming in at 304 x 210 x 14.8mm, making it 16.4mm narrower than the previous model.

With these design changes, a new larger trackpad has also made its way to the Blade Stealth (2019) model, using the same glass surface and Windows Precision drivers as the Blade 15. The keyboard has also been tweaked with new 63g switches, which of course still features Chroma RGB lighting – we would expect no less from Razer after all.

Perhaps the biggest changes come when we look under the hood of the laptop. This is where we have to differentiate between the three different models that will be available (see below for a full comparison). All three Blade Stealth models use Intel's Whisky Lake i7-8565U processor, which is a quad-core unit with Hyper-Threading. However, the two more expensive models will boast discrete graphics for the first time, with Nvidia's MX150 4GB chip making an appearance. 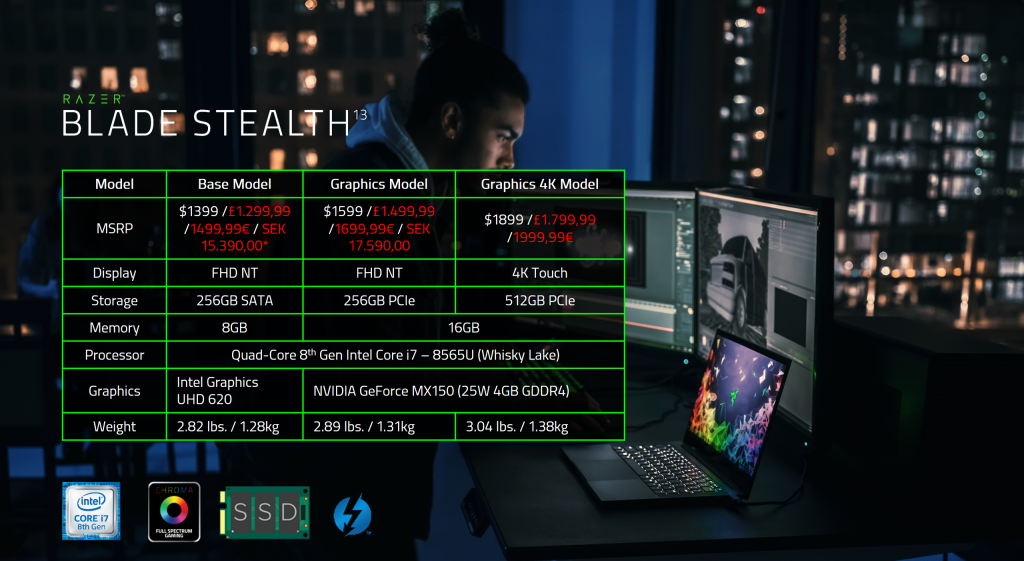 This marks a shift in the way the Stealth laptops are being positioned. Previously, these laptops relied on Intel integrated graphics, which have certainly improved over the years, but are still pretty feeble. Now, with the MX150 in place, we'll see better performance for certain workflows, like video or photo editing. However, we'll also see better gaming performance- the latest AAA titles may be out of reach at high image quality settings, but games like Rocket League and League of Legends should play pretty comfortably on this machine.

There are other areas where the three models differentiate themselves, too. For instance, the lower and middle options use 1080p 60Hz displays, when the most expensive model uses a 4K touchpanel display – though I am not sure of the benefit of 4K across a 13in display. Elsewhere, the base model has 8GB RAM and a 256GB SATA SSD, whereas the middle option has 16GB RAM and a 256GB PCIe SSD, with the top tier model rounding things out with a 512GB PCIe SSD and 16GB RAM.

Other areas to touch on include the updated I/O, with the right-hand side of the laptop housing 1x USB 3.1 Gen 1 Type-A port and 1x USB 3.1 Gen2 Type-C. The left-hand side of the laptop has another Type-C port, this time Thunderbolt 3, as well as another USB 3.1 Gen 1 Type-A, plus 3.5mm jack. Both Type-C ports can be used for charging as well, with a 65W power brick supplied. The battery capacity of the new laptop is 53.1Wh.

KitGuru says: The new Blade Stealth 13 (2019) looks like a very capable machine, with the addition of discrete graphics being particularly welcome. Are any of our readers thinking of getting a new ultrabook for 2019, and would you consider something from Razer?