Google is having a hard time with its new Pixel 2 smartphones, with the device being a lot harder to obtain than it should be at launch. The problems seem to have deeper roots than expected, however, possibly explaining the shortage in the first place. Concerns surrounding both the Pixel 2 and Pixel 2 XL are cropping up, with users experiencing issues related to their screens and speakers.

Pixel 2 XL users have begun to report issues of the display suffering from ‘image permanence’, to which an image burns into the screen due to remaining static for too long. This is a problem that is rarely seen these days, as displays have evolved past the CRT days and into the use of LED and OLED panels.

This problem is amplified when remembering that physical navigation buttons are also a thing of the past. As reported by Android Central’s Alex Dobie, after one week’s worth of use, these navigation buttons, including the home and the back button were burned into the OLED display.

Google has said “The Pixel 2 XL screen has been designed with an advanced POLED technology, including QHD+ resolution, wide color gamut, and high contrast ratio for natural and beautiful colors and renderings.” Given that other reports are complaining of the display being under-saturated and distorted, it makes Google’s claim that it “put all of [its] products through extensive quality testing before launch,” but it is currently investigating the reports. 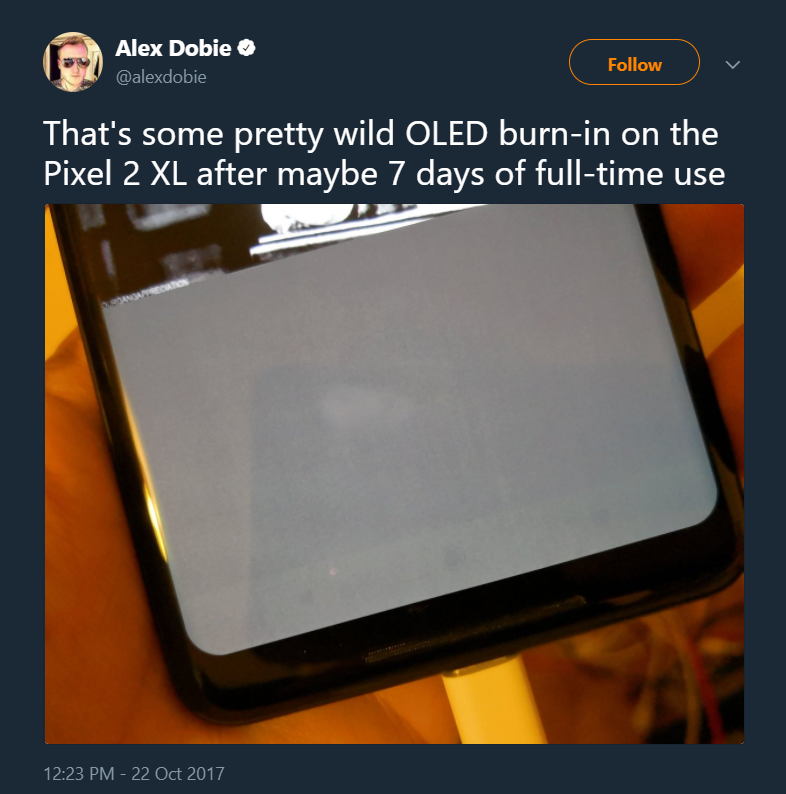 It’s hardly surprising that the Pixel 2 XL is experiencing such problems when it distinctly failed its quality control testing, to which the company is ‘amending’ the situation by offering affected customers a measly $10 worth of Google Play credit.

The problems aren’t limited to the XL variant, as the Pixel 2 is similarly suffering from issues of its own, as 9 to 5 Google discovered a 10db difference between its top and bottom speaker, a purposeful decision made to counter vibration issues caused by the top speaker. This offset is extremely noticeable and uncomfortable for the price of a “premium smartphone.”

Alongside this, some Pixel 2 devices are outputting strange noises to its users. When the phone is unlocked, it has the potential of clicking and ticking like a clock until it's locked again. Perhaps even worse, the phone that's designed for, well, calling people, can sometimes emit a high pitched whistle during calls.

It’s worth noting, however, that the Pixel 2 XL is still currently in the hands of a small selection of people for reviews and testing rather than widespread as its worldwide release is expected on November 15th, so more problems could arise between now and then. That is, if the phone manages to reach its full release given that it might even be recalled before then.

In the meantime, there is a megathread on Reddit attempting to account for every horrid detail that Pixel 2 users are experiencing with the displays, so if you’re having problems, it might be best to head over there and explain your plight.

KitGuru Says: There is no solid way to know what went wrong and where without an official response from Google, however I can’t help but think about the subcontracting of multiple companies for multiple phone designs could have attributed to miscommunication and faltering. Either way, Google has a hole to dig itself out of.