Two months ago, Nvidia filed patent lawsuits against both Samsung and Qualcomm, claiming that the two companies used patented GPU technology without permission or compensation. In response, Samsung has launched a counter-lawsuit against Nvidia but it looks like the graphics chip maker was expected this to happen.

In a post on the official Nvidia blog, David Shannon wrote: “we weren't surprised when, earlier this week, Samsung filed a lawsuit against us. Their action, filed in Virginia, focuses on eight patents. NVIDIA is alleged to have violated six.”

The Samsung suit includes a false advertising claim alleging that Nvidia's statement that the “SHIELD tablet with its Tegra K1 processor, has the ‘world's fastest mobile processor' is false and misleading. Additionally, the Korean phone maker believes that the Exynos5433 is faster on certain benchmarks: 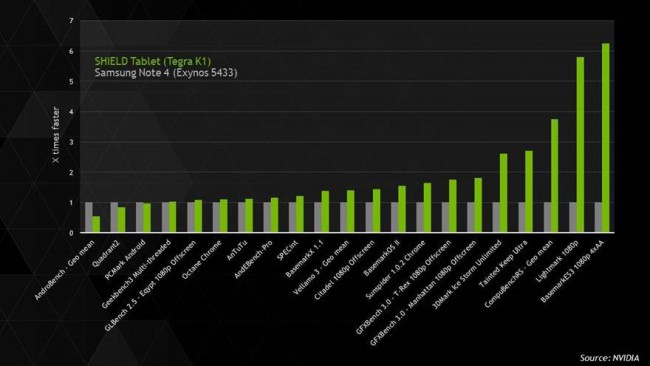 The above benchmark results are from Nvidia's own tests, which featured a standard ‘out of the box' Shield tablet and shows it beating out the Galaxy Note 4.

Unfortunately, Samsung is also suing another company known as Velocity, a small Virginia based customer of Nvidia. The blog notes that this is “unfortunate” as it is not Velocity's fight. However, the reasoning behind this is an attempt to keep the suit based in Virginia, which has a “faster time to trail than most jurisdictions in the United States”.

Nvidia finishes off its blog post by stating that Samsung's counter-lawsuit does not change its analysis or determination to win the patent dispute. The original lawsuit against Samsung and Qualcomm will go forward as planned.

KitGuru Says: It looks like this lawsuit is going to keep on escalating, it is also a shame that a smaller company has been caught in the crossfire in an effort to speed up a trial. What do you guys make of this?