Now, so far you will have noticed I have not mentioned the stand-out feature of the Dark Core RGB SE, the thing which differentiates itself from its non-special edition sibling – that feature being Qi charging.

That’s because I thought I’d combine it into one section with a look at the MM1000 as well – the mouse mat that is designed to go hand-in-hand with the Dark Core RGB SE. 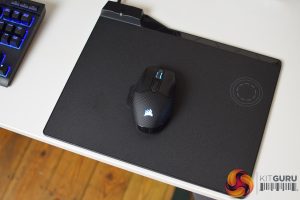 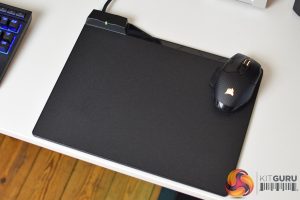 Essentially, the MM1000 is a hard surface mouse mat from Corsair which measures 350mm x 260mm x 5mm. That on its own might not sound too special, but its killer feature is its integrated Qi charging spot, positioned in the top right-hand corner of the mat.

This ‘Qi spot’ allows the Dark Core RGB SE to charge from the mouse mat itself, so you never have to plug the mouse in – just place it over the Qi charging spot and the battery will begin to replenish. A green LED will indicate the charging status in the top left corner of the mat. 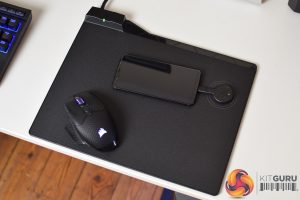 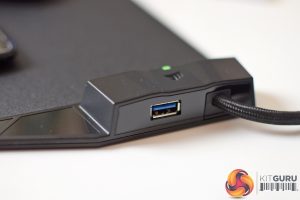 A small Qi adapter is also included with the MM1000, and this can charge other devices as long as they use either a microUSB, USB Type-C or Lightning connector.

Lastly, there is also a USB 3.0 pass-through port built-in to the MM1000. The mat obviously needs to be plugged into your PC to a) provide power for charging, and b) to send the data from this pass-through port back to the system, but it is a handy inclusion nonetheless.

Previous Development on PUBG has been hindered by anti-cheat efforts
Next Samsung Galaxy S9 benchmarks leak, pegged as most powerful Android handset of 2018