To test the Dark Core RGB SE, I used it as my primary mouse for one week. During this time, I used it while gaming, editing photos and for general office work.

If the image gallery above doesn’t display then please whitelist us in your adblocker as they can interfere with our display code.

There are five main tabs on offer in CUE: actions, lighting effects, DPI, performance, and surface calibration. Some are self-explanatory – the DPI tabs lets you change the DPI stages, and lighting effects obviously lets you tinker with the 3-zone RGB lighting.

Actions is a more complex tab, and it is here that you can record macros and re-map the mouse buttons. I think it could be made a bit clearer that you have to use the actions tab to remap the mouse buttons, as that functionality is a bit hidden away, but overall it gets the job done.

Elsewhere, the performance tab lets you change things like lift-off distance (LOD) and angle snapping, while surface calibration allows the Dark Core RGB SE to calibrate itself to the surface of your mousepad.

Overall, the software is just fine – it’s the CUE we know and love and it gives users control over all the key areas, so we can’t complain. 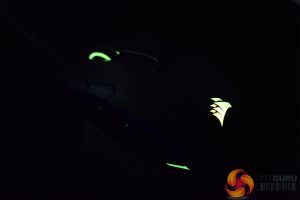 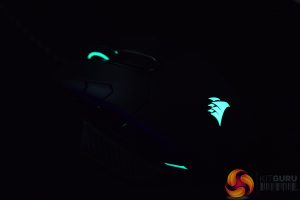 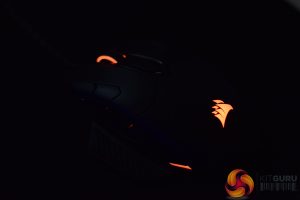 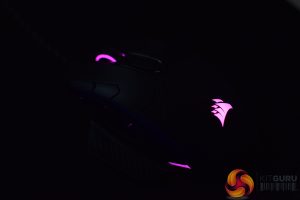 With three RGB zones on the Dark Core RGB SE, it is no surprise that the overall effect is clean and cohesive. Each zone is nice and bright, with very good lighting coverage across the Corsair logo in particular.

The lighting does affect the battery life of the mouse, which is certainly something to be aware of, but we’ll touch on that below.

Moving onto physical usage of the Dark Core RGB SE, we’ll start with build quality. I think Corsair has done a good job overall – the mouse doesn’t feel cheap or flimsy, and the 128g weight certainly helps in that regard. Its plastic panels are nice and solid, so I have very little to complain about.

I do have one issue with the build, though, and that’s to do with the glossy strip at the very bottom of the mouse, just under the Corsair logo. On my sample, I found this panel to be a touch loose and I could feel it moving under my palm as I used the mouse. Other than that, the mouse feels really good.

Its larger, ergonomic design also suited me very well. I really like mice with thumb rests, and the overall dimensions of the Dark Core proved just right for my size of hand (18x10cm). I found the overall size and shape of mouse made using a palm grip the most comfortable grip style, and I didn’t feel like I had as much control with a claw grip.

I didn’t really get on with the button layout of the Dark Core, though, particularly the navigation buttons on the left-hand side – I could read the back button, but the forward button was just too much of a stretch for my hand, so bear that in mind.

Now, let’s talk about performance. I’ll start with the 2.4GHz wireless connection – just as with the K63 Wireless, I honestly found it to be a flawless connection. Apart from the mouse being a touch lighter when used wirelessly, I couldn’t tell the difference between using the mouse with or without a cable.

The Bluetooth connection is not as snappy, though, with latency being rated at a minimum of 7.5ms. In contrast, the 2.4GHz connection is as fast as a 1ms delay which I just didn’t notice. The mouse is still usable over Bluetooth, you do just get that slightly delayed response.

Elsewhere, the PMW 3367 sensor is as good as we’d expect – I found pixel-by-pixel tracking to be perfect, I could not spot any wanted acceleration or smoothing and overall performance was just very snappy. In terms of lift-off distance, I found the the ‘low’ setting stopped tracking with 1 DVD positioned under the mouse, the ‘medium’ setting needed 2 DVDs and the ‘high’ setting was between 3 and 4 DVDs.

Moving onto the buttons, both LMB and RMB use Omron switches rated for 50m clicks, and the overall feeling is crisp and responsive. I’ve used faster switches before (Omron’s D2F-01F in the ROG Gladius II, for example) but these feel good and have a uniform response which is ideal.

I’m not too keen on the scroll wheel, though, as it’s tension is a bit low for my liking, while the rubber texture on the wheel is a bit slippery and not too grippy at all. It’s clicks are decent, however – a touch heavy but very usable.

Lastly, should you wish to use the mouse fully wired, you will be pleased to hear that the braided cable is of high quality. It is a bit thick, but it didn’t drag across my mouse mat and proved to be quite flexible overall and it was not a hindrance in the slightest.

From a full charge, Corsair reckons the battery of the Dark Core should last 24 hours with no RGB lighting, or 16 with all of the RGB zones enabled.

In practice, with LEDs shining proudly at 100% brightness, I found the battery lasted for just under 15 hours, so just under Corsair’s estimate. It’s not exactly the 70-hour battery life of the Logitech MX Master 2S, but the Dark Core does have the benefit of plenty of gaming-grade features and an excellent sensor, so it’s not an apples-to-apples comparison.

Previous Development on PUBG has been hindered by anti-cheat efforts
Next Samsung Galaxy S9 benchmarks leak, pegged as most powerful Android handset of 2018