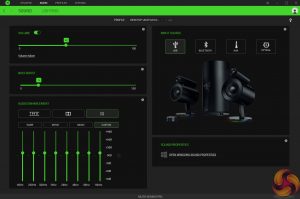 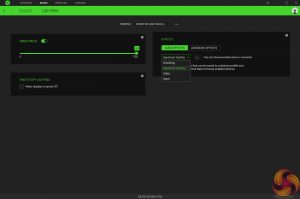 Starting with a look at Razer Synapse 3.0, the control for the Nommo Pro is split over two tabs – sound and lighting.

The sound tab lets you adjust volume and bass boost, while you can also choose between the four different input options. There are also a number of audio enhancement options – including the THX mode and Dolby Virtual Surround Sound – while you can also configure your own EQ.

In terms of lighting control, this is the same as with the Nommo Chroma – meaning you can choose between static, spectrum cycling and wave effects, while there is also brightness control and the option to create your own Chroma effect using the advanced studio.

Overall, it’s simple but effective – it gives you control over the key areas you’d want for a speaker system, and it’s very easy to use. Nothing to complain about here. 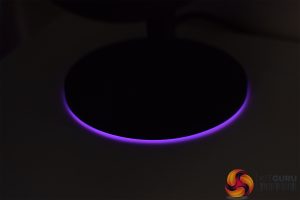 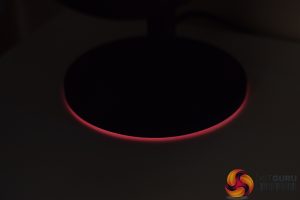 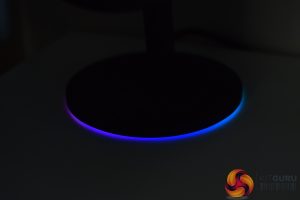 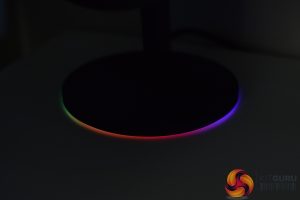 As for the Chroma lighting. as mentioned this comes from the base of each satellite – the subwoofer sadly does not have any RGB bling. It looks exactly the same as with the Nommo Chroma, and I think it’s cool but not really a major selling point for a £500 speaker system. Still, it’s not hurting anyone and you can always turn it off if it annoys you.

Now, onto what we’re all here for – the sound quality.

Diving straight in, I have to say when I first set up the Nommo Pro and hit ‘play’ on Owl City’s latest album, ‘Cinematic’, I was very disappointed. Everything just sounded very muffled, with no real clarity to the vocals or any energy in the treble.

I tried a different album – Train of Thought by Dream Theatre – thinking it could just be a bad mix on the first CD I tried. But unfortunately, I still felt the overall sound was veiled and like I was listening through a puddle of treacle. My opinion of the Nommo Pro was going downhill fast.

At this point, I decided to dive into Synapse and explore the settings for the first time – and this is where I discovered the root of the problem. By default, the ‘THX’ mode is enabled for the speakers – and this was causing the muffled audio I was experiencing. I have no idea why Razer thought it was a good idea to have this mode turned on as the default option, but there were are.

Switching to the EQ mode, and enabling a flat curve in the custom settings, made a huge difference – all of a sudden, I was amazed at how clear and crisp the sound had become. Vocals in particular, sounded like they were coming from right in front of me. The tinkle of cymbals and hi-hats also sounded very immediate and lucid.

Safe to say I did the rest of my listening with no additional effects or EQ adjustments – a flat curve sounded the best to my ear, by quite a distance. So, with that said, I have to say even when compared with some excellent headphones like the Sennheiser HD 660 S (incidentally, a similar price to this speaker setup) my favourite aspect of the Nommo Pro’s sound is that really wonderful clarity.

It does mean vocals and acoustics don’t sound overly warm or inviting – instead, the sound is more clean and clear. That does work better for videos and games though, as speech is just so transparent and uncoloured you won’t miss any in-game audio cues or anything like that.

I have no doubt the tweeter helps in this regard, as the Nommo Chroma is certainly nowhere near as resolving as the Nommo Pro. It’s not a fatiguing or sharp sound at all, so if you are treble sensitive I wouldn’t worry – but there is no doubt the overall sound is just so clean and transparent.

Obviously as the Nommo Pro has a physically huge subwoofer, I did have high hopes for the bass as well. There’s no denying that the bass can get absolutely massive and take over tracks – if you crank the bass to 100% in Synapse, I guarantee you will have some angry knocks on the door.

That being said, the more I listened to the Nommo Pro, the more I tuned down the bass setting until I only had it on 15% – which is where it has been for the past two weeks. The reason is that I just found the bass to be a little bloated and loose with the setting tuned any higher, and for me that interfered with the clean and clear sound that the satellites provide.

With the bass tuned down, the Nommo Pro still gave me a bit of low-end energy and kick, so music and games didn’t sound flat, but it doesn’t completely take over which is not the kind of sound that I like.

I do have to say that this is aspect is a slight disappointment – the subwoofer is not only physically enormous, but also one of the key features of the Nommo Pro, so to have to limit its output quite significantly in order to preserve the overall detail of the satellites is not ideal for a £500 speaker set. For me, I think taking the two satellite units from the Nommo Pro, adding bass ports to the back and ditching the subwoofer, would be the perfect solution – you could charge less for them, still get the excellent clarity and clean sound from the satellites but with hopefully a tighter bass response as well. But that’s just a wish.

Elsewhere, it is worth touching on the Dolby Virtual Surround Sound. I didn’t have high hopes for this mode – I typically find virtual 7.1 sounds quite poor with a gaming headset, so from a speaker setup I thought it would be even worse – but I was pleasantly surprised. Essentially, it sounds like the virtual surround mode pans in-game audio even further to the left and right, giving it a semi-believable effect that the audio is coming from around you.

It’s not perfect – with speakers positioned in front of you, there’s only so much that a mode like this can do – but you do get what feels like a wider soundstage. Vocals don’t sound as close or immediate, though, and I also feel that layer separation isn’t as good with virtual surround turned on – it sounds a bit like the background noises from PUBG, for instance, all blended into one. For me, I’d rather game without it, but if you do like gaming with speakers it is definitely worth giving it a try.

On the whole, I certainly like a lot about the Nommo Pro. They get really loud – loud enough I didn’t want to crank them past 50% both for the sake of my ears and for my neighbours downstairs – but retain a very clean sound which really made music and games standout. The bass isn’t bad at all, but I did find it a slight shame I had to dial it down quite significantly so it wouldn’t overwhelm the rest of the music.

That is just my preference, mind – I prefer clarity to booming bass, but you could well be reading this and thinking the Nommo Pro is exactly what you want. Horses for courses.