Although 4K screens have been on the market for a while now, they haven’t been the best choice for gaming. Most graphics cards have had problems driving this high a resolution, and even if they could, you’d be missing out on frame rates above 60 per second, since most 4K screens max out at 60Hz. But Acer has a different plan. With the Predator CG437K, you can have 4K at the same time as 144Hz adaptive sync.

It’s a massive screen, too, with a 43in diagonal. This is a VA panel, but even for this technology the contrast and brightness specification is surprising. Acer boasts 4,000:1 for the former and 1,000cd/m2 for the latter. These figures would make this the highest-contrast, brightest monitor we’ve tested. Being a VA panel, this screen doesn’t offer 1ms grey-to-grey pixel response. Instead, Acer quotes something called “VRB”, which stands for Visual Response Boost, and allows for the 1ms MPRT figure that is specified.

Alongside the 144Hz refresh, the CG437K supports AMD FreeSync adaptive sync, but is also NVIDIA G-sync Compatible. This means that it doesn’t have the expensive NVIDIA hardware built in for full G-sync, but you can still enable this with recent NVIDIA drivers because the monitor is accredited to work. So whether you’re a Radeon or GeForce user, you can still enjoy a refresh that varies with your graphics card’s frame delivery rate. There’s HDR support, and not just the entry-level version thanks to the 1,000cd/m2 brightness, but DisplayHDR 1000. 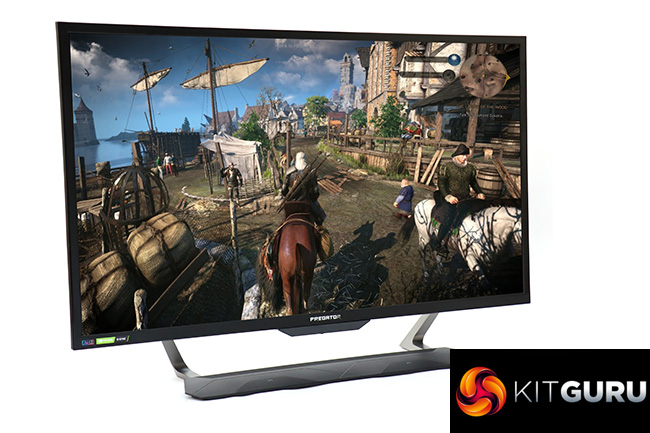 The panel is absolutely brimming with ports, offering three HDMI 2.0 and two DisplayPort 1.4, so you can hook up multiple inputs such as PCs, consoles, and set-top boxes. There’s a USB hub with USB C and 3.0 upstream options, plus two USB 3.0 and two USB 2.0 downstream connections. The built-in speakers are relatively meaty, producing 10W each, and there’s an analog audio output so you can route sound from a digital input to external speakers.

This is an absolute beast of a screen, and its weight has precluded the inclusion of any adjustability. The CG437K comes already attached to its stand, which is fixed in every sense. There’s no ability to rotate, raise, swivel or tilt the panel. If you want to use it at a different height, you’ll need to add some form of plinth beneath the stand. As a consolation, Acer has thrown in some natty strips of LED lighting to brighten up the bling factor.

Of course, this level of abilities doesn’t come cheap. You could grab at least couple of very good lower-resolution 144Hz gaming screens for the same ~£1200 as the Acer Predator CG437K. But you wouldn’t be getting one, huge 4K 144Hz screen that can double as your TV. For some, the extra might be worth paying. Let’s find out if the Predator can home in for the kill, or falls prey to its failings.