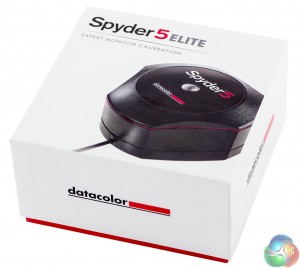 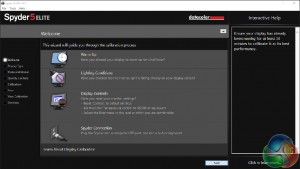 In the case of the AGON, we performed the primary testing in default preset mode – Gamma 1 and Warm colour profile. We also left the monitor at 60Hz rather than 165Hz, as higher frequencies can reduce image quality performance with some screens. 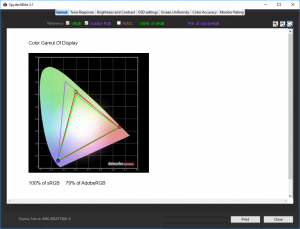 First off, the uncalibrated results show a good gamut, with 100 per cent sRGB coverage and commendable 79 per cent Adobe RGB. 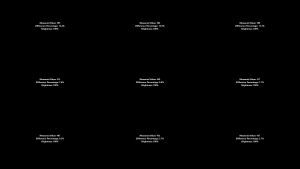 The first surprise comes with the brightness uniformity. We had heard rumours that there were issues in this area with the IPS panel used in the AG271QG, and this bears those rumours out, with a lot of variation in the top third, down the left and right sides, and in the bottom left corner. These results are notably behind the TN-based AG271QX. 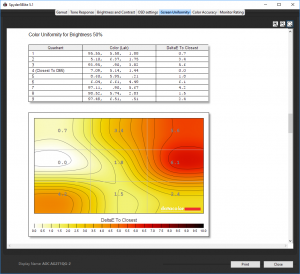 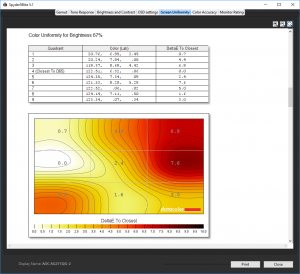 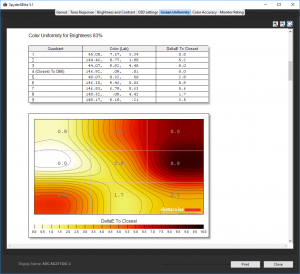 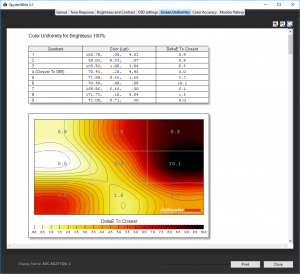 Colour uniformity is similarly less than stellar, particularly when compared to the AG271QX. This does improve as you reduce the brightness, but it’s a concern in such an expensive screen. 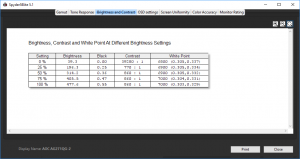 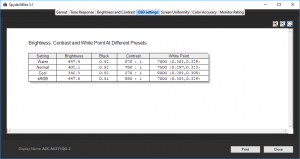 The AG271QG’s more pedestrian colour settings than most gaming monitors only provide a small range of different configurations. The Warm and sRGB options are hardly different at all, with the same brightness and white point readings, and almost the same black level and contrast.

The Normal option is a little less bright, with lower contrast, and a slightly cooler colour temperature. The Cool option naturally has a much higher white point at 9000K, allied with a lower brightness and contrast. 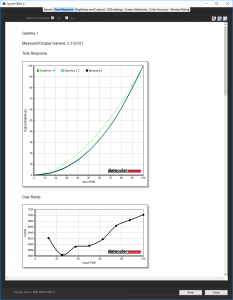 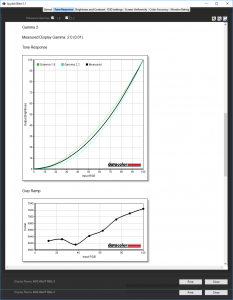 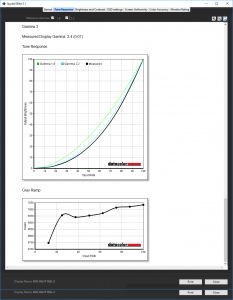 There are three gamma presets, with Gamma 1 being the default. This equates to almost exactly 2.2. The Gamma 2 setting reduces things to a straight 2.0, whilst Gamma 3 increases to 2.4. So there is a health range of options here. 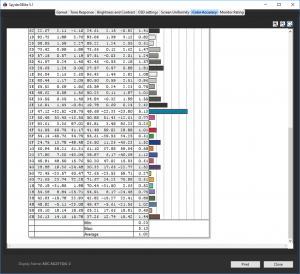 Colour fidelity is where IPS panels really pull away from their TN competitors, and without any calibration the AG271QG is much more faithful than the AG271QX, and indeed very good overall with a score of 1.02.

Next we calibrated the screen using the Spyder to see if this could improve matters even further. 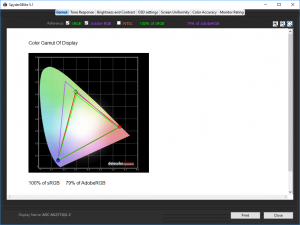 No change to the colour gamut, with 100 per cent of sRGB and 79 per cent Adobe RGB – already great results. 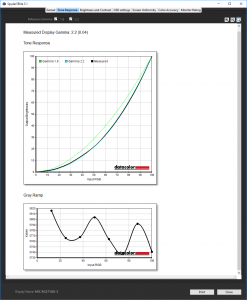 Only infinitesimal changes to tonal range, too, with the gamma remaining at 2.2. 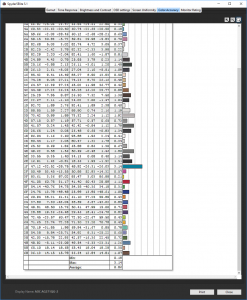 The already brilliant colour accuracy is now averaging 0.86. This is one of the best results we have seen from any panel we have tested.

We also tested the monitor with some games, both at the default 60Hz and the top 165Hz. With games that could deliver the higher frame rates on our test system, there was noticeably smoother animation at the higher refresh. This was even better when we enabled G-Sync on our test system’s NVIDIA Quadro K2200 graphics card. This varies the refresh to match the frame rate, within the bounds of the screen’s capability, which is 30Hz to 165Hz when overdriven, or 144Hz when not. The average casual gamer isn’t going to gain a huge amount from these much faster screen refresh rates, but if you’re competitive every frame counts for top performance.

Overall, the AG271QG has good and bad sides. The brightness uniformity issues are a little disappointing, but the colour accuracy is nothing short of brilliant, especially when calibrated. The 165Hz refresh and G-Sync will be very tempting for the serious gamer.