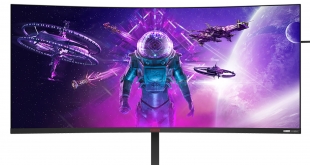 Just a few months ago, AOC helped bring curved 34in superwidescreens to an affordable and capable level for gamers with the CU34G2X. But what if a 144Hz refresh and mere G-sync compatibility are not enough? AOC has an alternative for you in the shape of the AGON AG353UCG, which has the same resolution but a slightly larger 35in screen size. More importantly, however, it has a 200Hz refresh, is fully G-Sync Ultimate enabled, and supports DisplayHDR 1000 too. The catch? It’s rather expensive…

Virtually all curved screens we’ve seen use VA panel technology and the AOC AGON AG353UCG is no different. It also sports the usual 3,440 x 1,440 resolution we find in 21:9 aspect screens. Being a VA panel, the contrast is a typically high 2,500:1. But brightness is also rather high at 1,000cd/m2. This allows the AG353UCG to boast DisplayHDR 1000 compatibility, which is one of the highest performance levels within the HDR10 standard. The gamut also encompasses a wide 133 per cent of the sRGB colour space.

Another difference to most VA panels is the pixel response time of 2ms. You might wonder why this is good when lots of VA panels now quote 1ms. The answer is that this is true grey-to-grey response, not MPRT, so this is a very fast panel by VA standards. It also offers NVIDIA G-sync Ultimate alongside its 200Hz refresh, so has NVIDIA hardware inside to provide the best-possible adaptive synchronisation when using GeForce cards. It also supports 1,000cd/m2 HDR when gaming, which most monitors don’t. 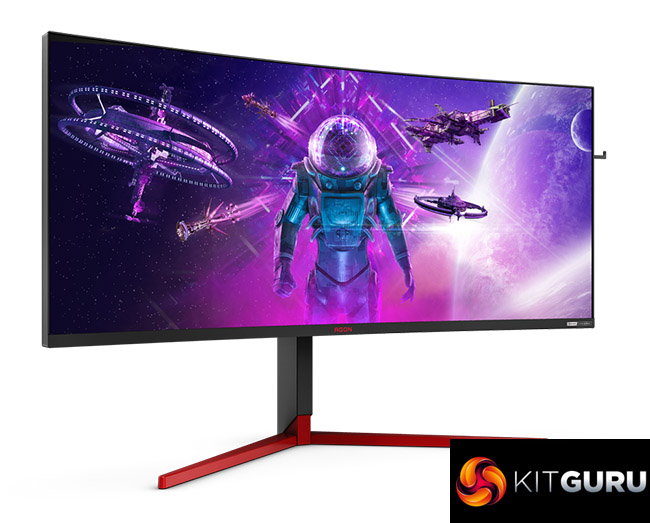 For such a large, wide screen, there’s a gratifying number of adjustments available, including swivel, height raising or lowering, and tilting. The port allocation looks decent on paper, with two DisplayPorts and one HDMI, plus a quad-port USB 3.1 Gen1 hub. There’s also a MiniUSB port for an external control puck and extra audio input for a mic pass-through from your PC. But USB-C is notable by its absence, and our sample had one of the DisplayPorts disabled.

Apart from these omissions, the AG353UCG looks top of the heap in every feature. But, as we hinted, this is not a cheap screen, with only ASUS’s suspiciously similar ROG SWIFT PG35VQ coming in at a greater price of £2,500. Actually, that’s an understatement, because for this screen’s princely price of £1,850, you could almost buy four AOC CU34G2X screens for the same amount. The question is, would you want to? Let’s find out.