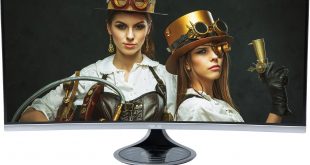 The future of screens appears to be curved. We’re seeing quite a lot of new products that eschew the straight and narrow now, particularly when combined with an aspect wider than 16:9. The latest to arrive on the KitGuru review desk is the ASUS Designo Curve MX34VQ. This is a very attractively styled 34in screen, with a 21:9 aspect, and 3,440 x 1,440 resolution.

The resolution and size makes the MX34VQ quite similar in specification to the Samsung CF791. However, although both use VA panel technology and offer a 100Hz refresh, the ASUS unit is much more mildly curved, with 1800R rather than the Samsung’s much more pronounced 1500R, so this won’t be exactly the same panel underneath. There’s also no FreeSync or G-Sync included. 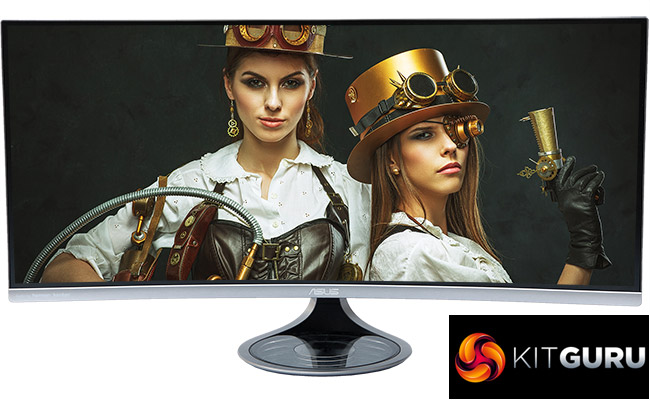 Otherwise, specs are pretty similar, with a 300cd/m2 brightness rating and 3,000:1 contrast. Response rate is the usual 4ms we see from VA. So this isn’t a specifically game-oriented screen, although there are GamePlus modes included which will give you extras like onscreen crosshairs or frames per second. An added bonus for everyone is the inclusion of a Qi Wireless charger, rated at 5W/1A.

This sits on the stand base, which then lights up to show charging taking place. Supported phones include Samsung’s Galaxy S5 and above plus many Nokia Lumias – but sadly no iPhones.

Also notable by its absence is a USB hub, but there is a headphone jack so you can listen to audio piped in via HDMI or DisplayPort without having to use the built-in 8W Harman Kardon stereo speakers.

Overall, the ASUS Designo Curve MX34VQ is a potentially rather attractive package, and not just for the way it looks, as it’s a little cheaper than the Samsung CF791 too. Let’s find out how it compares.