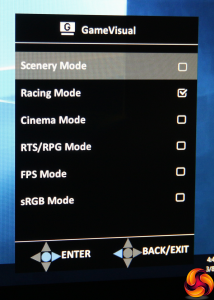 Press the next button up from the power button and you call up the GameVisual quick menu, which is essentially the presets. There’s a good balance between “serious” and gaming presets, including Scenery, Cinema and sRGB for the former, plus Racing, RTS/RPG and FPS for the latter. 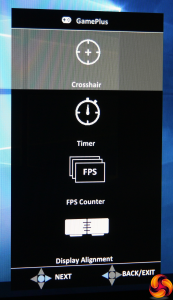 The next button up calls up the GamePlus quick menu. Here you can choose to add an onscreen crosshair, a timer, frames per second overlay, and tools to align your displays in a multi-monitor setup. 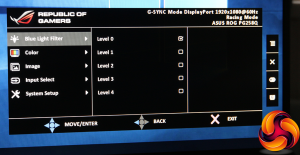 Press the joystick and the main menu appears, with the Blue Light Filter as the initial default option. This has four levels (as well as off), and will protect your eyesight from tiredness. 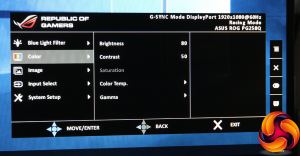 Next down on the menu is Color. Here you find control over Brightness and Contrast, plus Color Temperature. The latter offers Normal, Cool, and Warm presets, or red, green and blue adjustments in User mode, but no control via Kelvin values. There are 1.8, 2.2 and 2.4 values for Gamma. 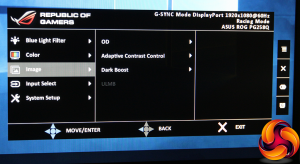 The Image section has a few sundry enhancements. These include OverDrive, which improves pixel response even beyond the 1ms level. There’s an Adaptive Contrast Control that will vary brightness to increase perceived contrast, and Dark Boost that improves detail in shadow a bit like HDR, although at the expense of a less realistic image.

ULMB (Ultra-Low Motion Blur) can also be enabled here, but only if you don’t have G-Sync turned on. Since the latter is far better, ULMB should only be used with a graphics adapter that doesn’t support it. Since you’re paying a premium to have G-Sync in the first place, you’re better off using this screen with NVIDIA graphics and turning on G-Sync, so ULMB is really only there just in case. 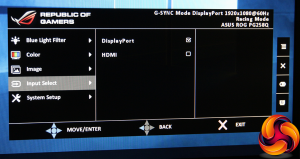 Not much going on in the Input Select area, with just two inputs to select. 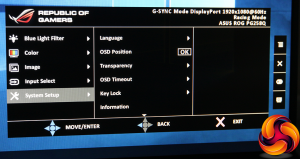 System Setup contains sundry options for configuring the way the OSD is displayed, plus controls over the headphone sound volume, and resetting everything to default. This is also where the settings for LIGHT IN MOTION are hidden, which is the LED lighting system at the base of the stand.

This has three intensities (or it’s off by default), and supposedly changes colour and intensity with different game modes. We had trouble doing anything other than turning it on, although it was quite cool to have a red glow from the bottom of the screen with the ROG SWIFT logo of our choice.