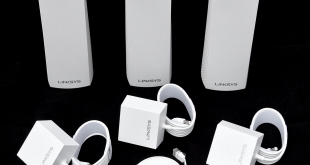 You wait decades for wireless mesh network products to arrive and then two come at once. Just a few months after NETGEAR’s Orbi hit the scene, we have the Linksys Velop. This attempts to go one better by including not just two meshing units, but three in the kit we were sent. How does it compare to the Orbi?

The Velop uses the same sort of technology as the Orbi. Whereas a WiFi repeater will use to your existing WiFi connection as its pipeline to the network, these products have a dedicated “backhaul” WiFi connection that is exclusively used for the units to talk to each other. This has a couple of really useful side effects. Firstly, the backhaul WiFi connection is only used for hooking up the base units; no clients will be on this WLAN, so it can operate as fast as possible without contention. Secondly, the base units can all use the same SSID, making the user’s experience as they move around a building seamless.

Whether this is significant in the real world only testing will tell, but in theory this isn’t such good news if you are using more than one extra node for the mesh. In the case of the three-pack we were sent, all three nodes will be relying on this 867Mbits/sec backhaul, potentially reducing the performance available to each. 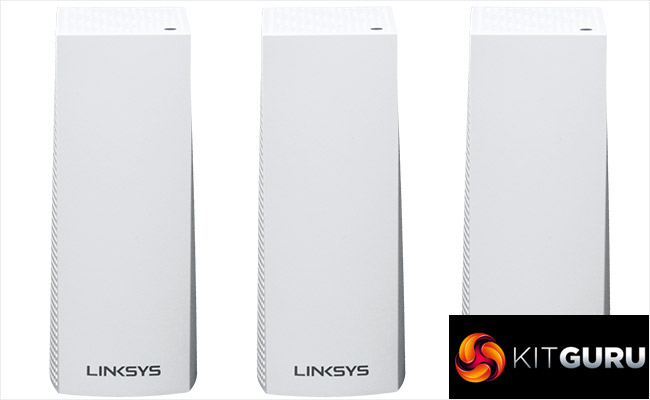 The Velop is still a tri-band router, again like the Orbi, and its other two channels are the same as NETGEAR’s. There’s another 867Mbits/sec 5GHz 802.11ac channel for client usage and a separate 400Mbits/sec 802.11n channel running at 2.4GHz for legacy devices.

But overall this means the Velop is classified as AC2200 in aggregate, rather than AC3000, due to the lower-bandwidth backhaul. However, Linksys quotes AC6600 for our three-pack, cheekily adding the bandwidth of all three units together.

Unlike the NETGEAR Orbi, the Linksys Velop units are all identical and interchangeable. Each one sports two Ethernet ports and a power connection, hidden underneath so the little white towers can sit around your house as neatly as possible. They look quite a bit like designer speakers, too, so aren’t a complete eyesore like some wireless kit. However, there is no USB so remote USB-attached storage or printer connectivity won’t be an option.

The three-unit pack we were sent has another obvious downside, however – it costs around £500. You can purchase the Velop as a two-pack or single units, for £349.99 and £199.99 respectively. Read on to find out whether Linksys’s mesh is a NETGEAR WiFi beater.