The Linksys Velop isn’t all bad. The styling is nicer than the Orbi’s, and the smartphone-driven setup makes it accessible to a less tech-savvy audience. But otherwise NETGEAR has the jump on Linksys. The Orbi’s performance is in a different league to the Velop’s, and that’s with just two satellites, thanks to having double the backhaul speed.

The extra Ethernet ports on the Orbi also make it more of a replacement for an existing router. The Velop, on the other hand, will need a separate switch or wired router to sit alongside a wired office network to provide enough ports for non-wireless systems. 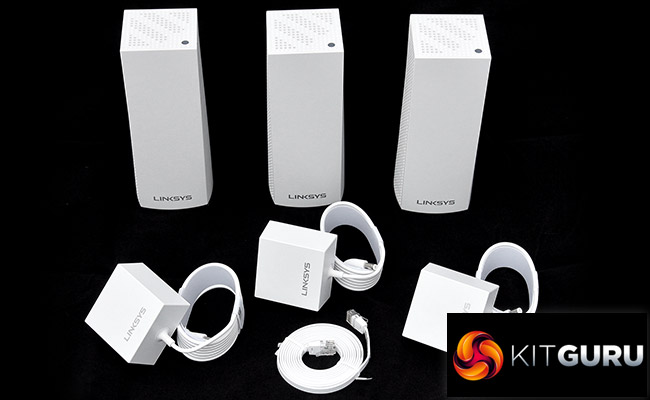 With no USB either, there’s an opportunity missed as well to use the extra node for convenient positioning of a USB-attached printer or storage device. There’s no price advantage either, considering that the two-unit Velop costs around the same as the Orbi’s two-unit pack. So, overall, if you’re looking for greater WLAN coverage via mesh networking, NETGEAR’s Orbi keeps its crown as the most effective option.

Kitguru Says: The Linksys Velop uses mesh technology to provide larger WiFi coverage than a standalone router, but it’s nowhere near as fast as NETGEAR’s Orbi.