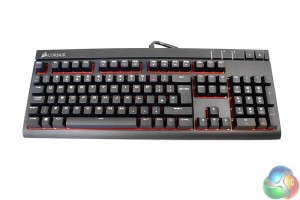 Corsair’s STRAFE keyboard is not the most eye-catching out there. Its matte black paint job and flat surfaces give it quite an enterprise look. Its build is pretty solid, with not much creaking or flexing of the frame if you attempt to twist it. It is made of plastic, so does not have that cold feel as some metallic topped keyboards can have, but that does mean it is not going to be quite as durable. 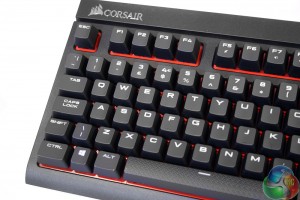 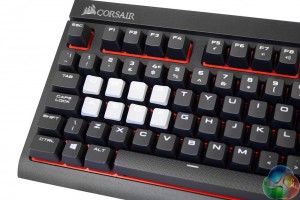 The key caps on this board are the typical shape, with translucent plastic keys which allow for the backlighting to shine through. However, as with some other gaming boards, this one comes with replacement key caps. There are WASDR versions for the FPS players, and QWERDF for the MOBA players out there.

Or you can use all of them if you prefer. They each have trextured surfaces and different angles for the key shape. We will need to test these to see if they have much of an impact on gaming or typing ability.

However installing them is as simple as using the provided key-changer tool, pulling off the old caps and pressing the new ones into place. They slot in nicely and raise the height of the standard keys by a couple of millimetres from some angles. 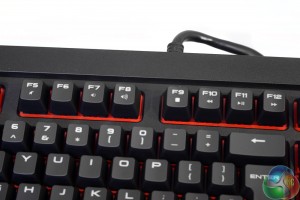 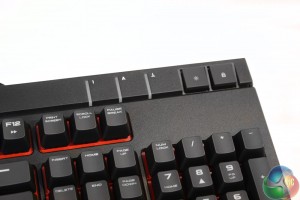 Running along the top of the board are the usual media keys, though Corsair makes the smart choice of having them present from F5 through to F12 (minus F6 for some reason). This places them all within a stretched hand’s reach of the FN function key which replaces the right hand Windows key.

While this may look odd skippiung over F1-F4, it means that you are not required to use two hands to use the media keys, which would defeat the point of them being in a quick-press position, since you would have to remove both hands from what you are already doing. That is not the case with this board, which shows real thought has gone into the little things.

Continuing the enterprise theme are the understated lock indicators, which are simple strip plastic LEDs. Next to them are a pair of buttons, the first of which controls the brightness of the backlighting, which has four steps, including one that turns it off entirely. The switch next to that locks and unlocks the Windows key, to prevent accidental pressing mid-game. 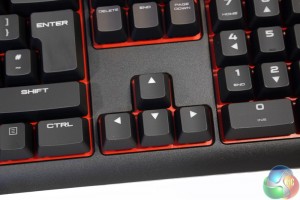 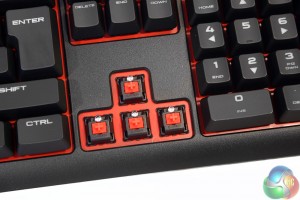 As much as this board is quite bland in its styling however, there is an underlying bed of red behind all of the keys, which not only helps bolster the red backlighting, but also gives it a more interesting look too.

Peeling off the standard arrow keys, we can see also that the Cherry MX switches in use on this board are the standard Red variant, which means they are fast, but lack any form of tactile or sound based feedback for actuation. The LEDs are also off centre, which could mean that lighting coverage is not the greatest on these key caps. 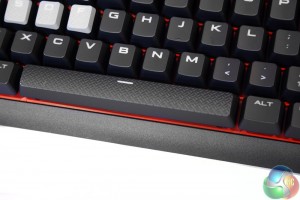 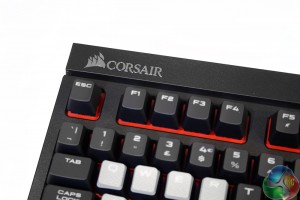 Other notworthy points on this board, include the textured space bar and the fact that Corsair has thankfully reverted to its classic logo rather than the “tramp stamp”, tribal tattoo it went with for a while. There are also light strips along the left and right hand side of the board, giving your desk a red glow when overhead lighting is turned off. 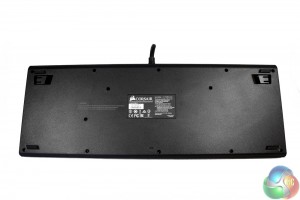 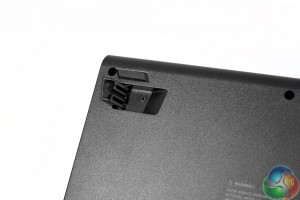 The underside of the Corsair Gaming STRAFE is also pretty unremarkable, featuring the usual rubber feet in the corners and the extendible legs for a steeper angled board. The feet on this are quite small though, which does mean it is not the ‘grippiest’. In our pre-testing use, we found that it did not take much to slide this board around a desk.

This seems to be because there are no rubber feet on the base of the extender legs. That means that when at full stretch, it leaves the STRAFE with just two front-corner rubber feet holding it in place. 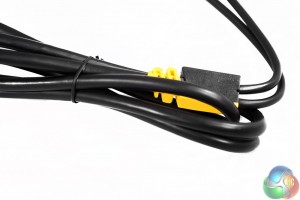 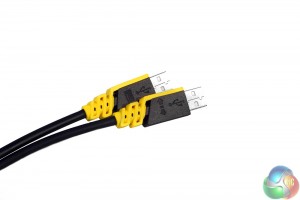 The cable for this board requires dual USB – due to the USB throughput port – which each have bright yellow headers to separate them from all the other black connectors at the back of your PC. The cable is standard rubber and is thicker than usual to cater to the twin headers.