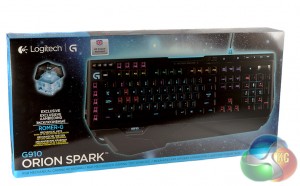 Logitech highlight the product via a large image of the keyboard. The front shows a little break down image of the Romer-G key switch, designed by Logitech for the G910. 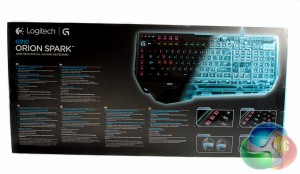 All information found on the back of the box is in small print and Logitech doesn’t seem to make a big deal out of any specific feature, keeping descriptions short and to the point. 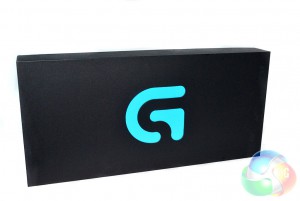 Once you take the outer sleeve off you will come across a rather premium looking box, bearing the Logitech gaming logo. 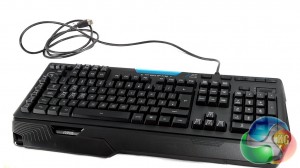 Lift off the top of the box and you’ll be instantly greeted with the G910 keyboard. At first glance, it looks rather big and there are keys and buttons crammed everywhere. 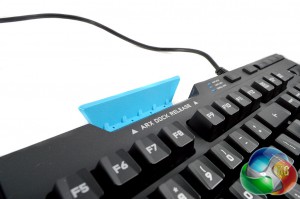 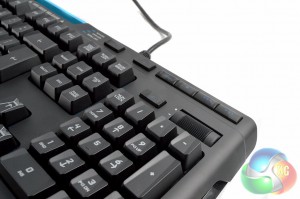 Along the top of the keyboard you will find the ARX docking station, which you can slot your smartphone or tablet in to and use as a second screen via an app. You will also come across a set of media function keys.

The ARX dock isn’t actually much of a dock in the traditional sense, it is more of a stand for a phone/tablet – to use as a second screen. It doesn’t charge devices and it is only made of plastic.

As you can see, Logitech has opted for a new design for their keys, They have concave curves on them, allowing each finger to sit directly in the middle of the key. Additionally, you will find that the keys all sit fairly close together … this can take some getting used to. 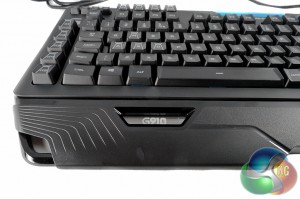 Users will find a column of G keys going down the side of the keyboard, in-line with the tab, caps lock and shift keys. There is also a secondary row of G keys above the F keys at the top.

This layout is slightly different to past models like the G19, which featured a slight extension to the side of the keyboard in order to fit all of the G keys next to each other in two separate columns. 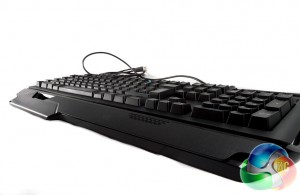 The G910 wrist wrest is permanently attached to the main body of the keyboard. However, there are face plates, which you can clip on and off with different designs. Logitech includes a spare one in the box. 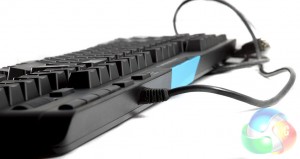 As you can see, along the back of the keyboard there are no USB or Audio ports which you will often find on other keyboards in this price range. This won’t be a huge deal for most people but I am sure there are some buyers out there who would appreciate the extra features. Personally, I quite like having a USB port or two on my keyboards.

Overall, the design is looking good so far. Although I do have some concerns about key spacing but we will get more on to that in the testing portion of this review. It would have been nice if the dock was able to charge devices, rather than merely acting as a stand.

The construction of the keyboard feels solid enough and there is a lot of weight to it, adding to an overall premium feel. The G910 is certainly built to last.