The Ozone Strike Pro is a pretty solid keyboard. The sample we received was German, so some of the keys were a little different but after some playing around I was able to get used to the keyboard and type like I normally would.

The back-lighting on this keyboard is very gamer centric, the WASD, E and Q keys all light up in red in addition to the arrow keys and the escape key. You can set the keyboard to only light up the red keys, after that you can illuminate the rest of the keyboard in white and cycle through different intensity options.

The backlight is nice and bright but it doesn’t come with fancy effects if that’s what you’re looking for. Although there is a pulse effect available.

The Ozone Strike Pro does come with some driver software, which will allow you to change the keyboard’s polling rate, response time and light intensity. You’ll also be able to set up some macros. 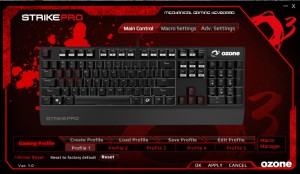 For some reason the window isn’t re-sizable, so if you’re using a resolution higher than 1080p then the window might look a bit small to you.

You have six macro keys in total to play with. You can also have up to five different profiles. Recording a macro was easy, you can even set up delays between key commands and how many times you want the action to loop. However I did find software to be quite sluggish even on a high end system. 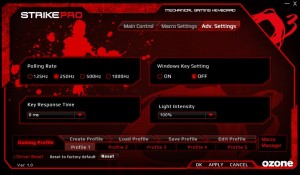 In the advance settings menu you can cycle through lighting options, polling rates and set up your response time. However, you don’t need the software to do this as there are keys dedicated to these functions on the keyboard itself.

Prior to using this keyboard I mainly used Cherry MX Blue switches, which I found great for typing up the daily news here at KitGuru. However, when it came to gaming I found the click of each keypress to be a bit distracting.

Fortunately, this problem is solved with the Ozone Strike Pro’s Red switches as there is no click. I found that the lower actuation point of the red switches really improved my response time in games too. You don’t necessarily have to go with red switches to get this effect though as Brown switches offer the same actuation point.

The layout of this keyboard is well thought out, the keys are spaced out well, which aided my touch typing. I didn’t find myself accidentally pressing the wrong keys often.

In all, the Ozone Strike Pro can’t be faulted in terms of gaming performance, the Red switches are a nice fit and the customization options will allow competitive gamers to configure the keyboard how they want.

The only real problem I had with this keyboard was the lack of wrist-wrest.

Ozone has extended the bottom of the keyboard slightly but it’s not enough to wrest on while typing or gaming, which makes longer gaming or typing sessions quite uncomfortable. A bigger, detachable wrist wrest wouldn’t go amiss.