There are a few things to unpack when it comes to the performance of this display before looking at its overall image quality, and these are its 4K resolution, gaming performance and HDR capabilities.

As a general rule of thumb the higher the resolution, the better. However, running a 4K display isn’t always smooth sailing.

For a start, such a high resolution on a 27-inch screen means you’ll have to use Window’s scaling setting to make the screen readable in normal use. Here you’ll be opting to have Windows scale things by 150%, which simulates a 2,560 x 1,440 resolution.

The key being that this scaling means you have a lower practical resolution, somewhat negating the point of having so many pixels. Plus, it can cause issues. 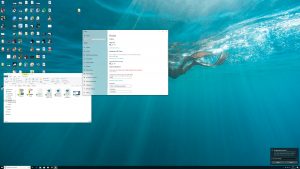 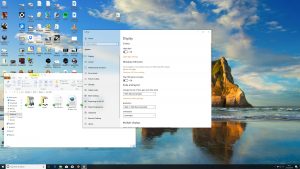 For a start, some apps still don’t support it properly. Even something like EA Origin often stays at its 100% size, rather than scaling up. Then there’s the hassle of switching between resolutions when gaming. Whether you’re gaming at native resolution or choosing to run at a lower resolution such as 1080p, Windows will often flicker and faff about and mess around with the size and position of your other windows as you load and unload (or Alt-Tab out of) a game.

It’s the sort of thing that you expect to have to deal with on a laptop screen, as you have to use a scaled screen resolution on such small displays if you want to end up with a usable resolution. On a full desktop display, though, a 4K screen such as this definitely feels like it brings as many cons as pros, and that’s not even taking into account the massive graphics processing power required to run games at full 4K resolution.

Gaming on the XB273K is largely a pleasure thanks to the combination of its excellent overall image quality, fast refresh rate and G-Sync. However, for those seeking a monitor for a competitive advantage, this display does come with a couple of caveats.

This first is the obvious one, which is that trying to get games to run well at this display’s native resolution is a real struggle, due to the sheer number pixels. As a reminder, a 1080p resolution is just over 2 million pixels, 1440p is 3.7 million and 4K is a massive 8.3 million.

For instance, using an Nvidia GTX 1080 in the current Battle Royale favourite, Apex Legends, we recorded average frame rates of 70fps at 4K with all in-game detail settings turned down to their minimum. Switching to 1080p and the display almost never dropped below its 144fps maximum.

Granted, playing at that resolution looks amazing, and it’s great for slower-paced games but for more competitive gaming, you’ll have to drop down a step even with modern, expensive graphics cards.

Then there’s the more understandable limitation that this is an IPS screen with a 4ms GTG response time so it doesn’t feel as snappy as 1ms TN displays. This is more of a reasonable compromise for the step up in image quality you get, but again it’s worth bearing in mind.

Acer likes to talk up the HDR capabilities of this display, with it including the latest G-Sync HDR module and being able to reproduce HDR-level colour fidelity. However, without a proper multi-zone variable backlight, its HDR is not really worthy of the name.

You still get the richer-looking colours of HDR but, don’t be fooled, the key selling point of HDR is its high contrast, not its extended colour range. 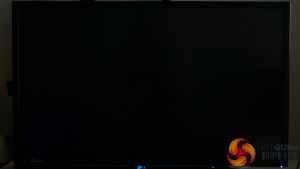 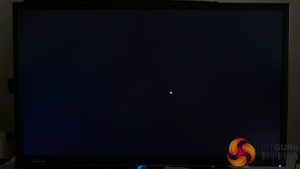 We experimented with the variable backlight setting on this display to see if it at least had some rudimentary zoning on its backlight – such as on the Samsung CHG90, for instance – but as you can see from the images below, even just the tiny amount of light needed to illuminate a cursor turns the whole backlight on.

Getting the extended colour range of HDR is a nice to have but it’s nowhere near a big enough deal to pay the premium this monitor demands.

One final thing to note about this display, before we move onto looking at its overall image quality, is the relationship between its maximum refresh rate and the picture quality you’ll get.

While its maximum overclocked refresh rate is 144Hz, choosing this option results in the image quality of the display degrading. Due to the bandwidth limitations of DisplayPort, there simply isn’t enough room to send a conventional stream of image data at that resolution and frequency. 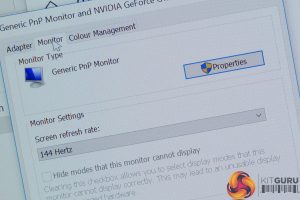 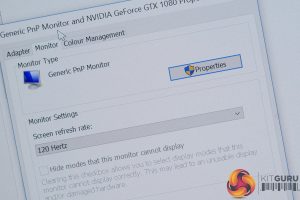 As such, we’d recommend manually reducing the refresh rate in Windows display settings when not gaming, to get the best image quality. 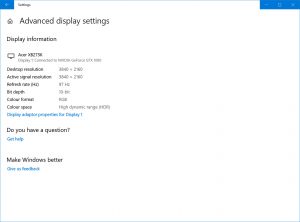 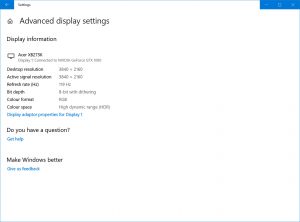 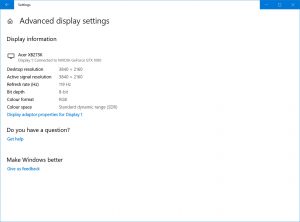 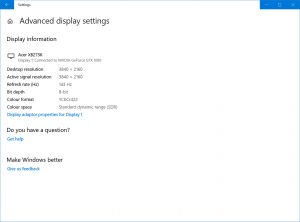 Further complicating the situation is that you also need to reduce the refresh rate for HDR. At anything above 98Hz, the display can’t deliver true 10-bit colour but instead has to rely on 8-bit colour with dithering. This drop in colour fidelity is far less noticeable than the chroma subsampling, and you’d certainly have no issues gaming at 120Hz with HDR, but it’s still something to note.

Previous Google patents quick changing wristbands, suggesting the Pixel Watch might be on its way
Next Delays caused by the potential Huawei 5G ban could cost the UK £6.8 billion