We’re just going to come right out and say it – this is the best-looking monitor in its class. For a start, you’ve got narrow, low-profile bezels round the top and sides of the display. This immediately creates a sense of sleekness that any chunky-bezelled rivals struggle to overcome.

Then there’s the slender base and stand. Made from solid metal, they’re reassuringly hefty and rigid, despite being so slim. Stick this display next to just about any rival and they look positively dumpy in comparison. 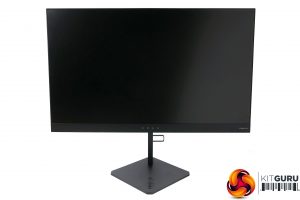 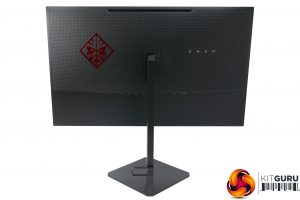 The design is then made cohesive by a nicely uniform matt black finish throughout. There’s a triangular pattern on the back of the display but it totally fits in with the angular theme of the stand.

Even the more gimmicky aspects of the design have been done well. The rather fetching Omen logo on the base is marked out in glossy black to contrast with the matt black surrounding it. You’ll notice it catch the light but otherwise it’s unobtrusive. The same can be said for the white Omen lettering on the lower bezel and back of the display, as well as the further metallic red Omen logo on the back. The whole thing just feels classy.

There’s also a light that shines down from under the display onto the base, like we’ve seen before on the likes of the Asus PG27UQ. However, here it’s a single light with no gimmicky patterns; it just adds a nice subtle glow. You can even have the light react to what’s on screen, like a really basic version of Philips Ambilight. 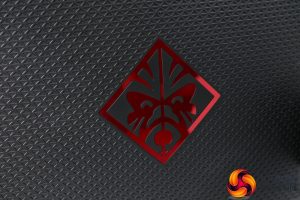 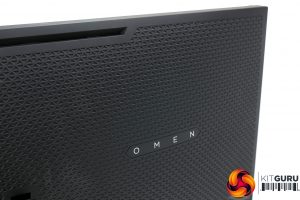 Unfortunately, what this display can’t claim to be is the most feature rich we’ve ever seen. Specifically, while the stand offers tilt and height adjustment, you don’t get pivot or rotation options. Neither is essential but nearly all rival displays have these features and they do make plugging in cables much easier.

One little nod to practicality is that the top of the stand has a couple of protrusions that act as a headphone stand. We’ve seen headphone stands round the back of displays before and generally found them impractical. However, here it works better than we expected, as the rest of the stand is so narrow that the headset slides over it easily, plus the landing area is nice and long so you don’t have to be too precise when aiming your headset.

As for connectivity, you get the standard G-Sync selection of one DisplayPort and one HDMI. Non G-Sync displays tend to offer a few more, making them a little more practical as a screen for your multimedia hub, but two ports should be enough for most users. 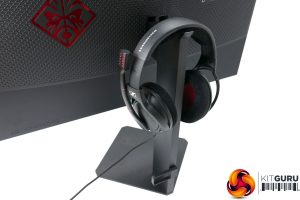 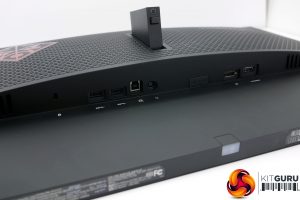 Joining these sockets round the back of the display are two USB 3.0 ports. Sadly, you don’t get any further USB ports on the side of the display as you do on the AOC AG271QG, for instance. You do, though, get a headphone jack on the left edge. There are no speakers.

As for this monitor’s display, it uses a 27-inch, TN-type panel made by AU Optronics. It’s a 2,560 x 1,440 resolution panel that has true 8-bit colour processing so should have good colour reproduction.

Being a TN panel, it has a lightning fast response time of 1ms, making this a genuine competitive gaming-class screen. The default refresh rate is 144Hz, though this can be overclocked to 165Hz.

The downside to using a TN panel is that you get poor viewing angles and colour accuracy isn’t as good as IPS displays. A sister screen to this one that uses the same IPS panel as the Asus PG279Q and Acer XB271HU would be a fine addition to HP’s display lineup.

One of the final clever touches to this monitor’s design is the integration of the OSD controls, which are all flush with the back surface of the display, alongside the power switch.