Acer has announced a set of three new monitors using IPS panels. These three monitors, the KA272bmix, the KA242Ybmix, and the HA220QAbi, are now available in Japan, and will come to the western market at a later date.

These Acer monitors were designed for safe everyday use thanks to their ‘Flickerless’ technology, used to suppress the monitors’ flickering, and the ‘BlueLight Shield’, to reduce their blue light transmittance. These monitors can tilt from -5º to 15º, and Acer says their frameless design delivers a more dynamic video environment when you pair two of them side by side.

As per Guru3D, all three monitors support AMD FreeSync, and each has 1x HDMI 1.4 port and 1x D-Sub to connect them to a PC. Their panels display 16.7 million colours, have a contrast ratio of 1000:1, a luminance of 250cd/m², cover 72% of the NTSC colour gamut, and their viewing angles are 178º vertical and horizontal. All panels come with a matte coating. 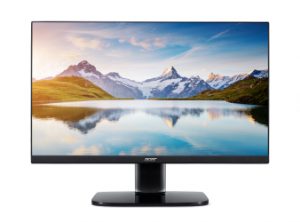 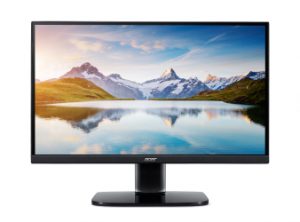 KA272bmix’s little brother, the KA242Ybmix, also comes with a Full HD panel with the same refresh rate and response time, but it only measures 24 inches diagonally. Regarding the remaining specifications, it also has the same VESA mount support, a 3.5mm audio jack and a pair of 2W stereo speakers. Given that the panel is smaller, the whole monitor is also smaller and lighter, measuring 540x414x192mm and weighing 3.7kg. This monitor’s price tag is $135. 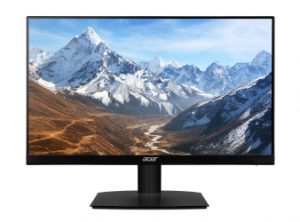 The HA220QAbi is a 22-inch monitor with the same FHD resolution and refresh rate as the other two, but its response time is 4ms (GTG). Measuring 498x384x186mm and weighing 2.50kg, the thinnest section of the monitor is only 6.6mm. This monitor, unlike the others, doesn’t have an audio jack, nor VESA support nor a pair of stereo speakers. This monitor will be priced at $135.

KitGuru says: Do any of these three monitors pique your interest?