Not surprisingly at its relatively low price point, BenQ has taken a no-nonsense approach to the EL2870U’s design. Though it comes in the skinniest box we’ve seen a 28in display arrive in for some time, this monitor doesn’t offer slim bezels, a svelte chassis, RGB lighting or any other particularly note-worthy aesthetic embellishments.

What you do get is plain and solid, and honestly there’s nothing wrong with that if you value practicality over looks, but in this day and aged we’re used to more modern-looking tech. The top and side bezels are around 19mm wide, while the bottom one comes in at a not inconsiderable 26mm, making this quite the chunky monkey. 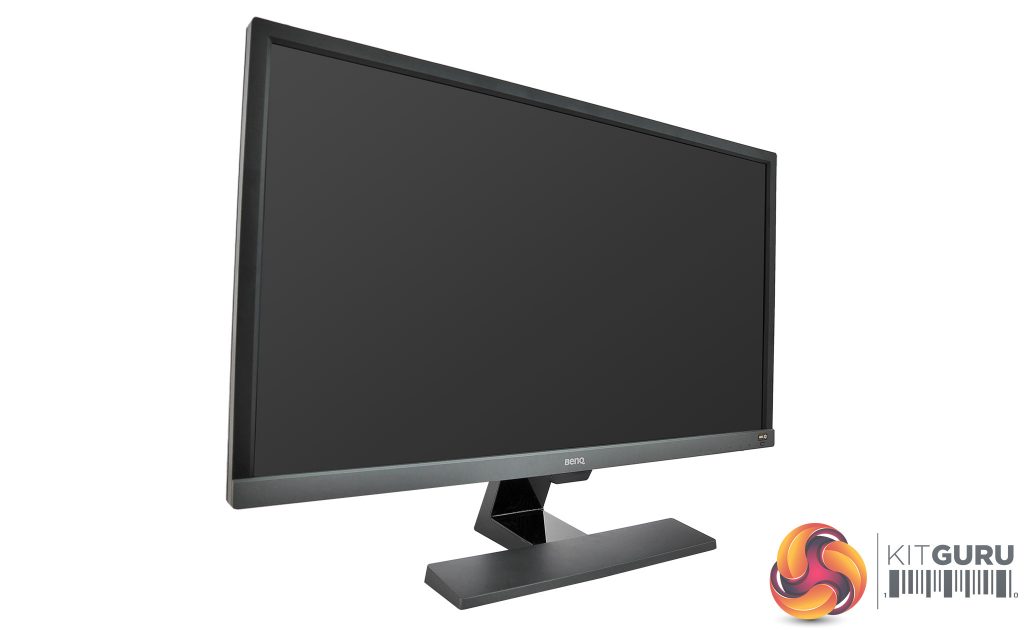 Nevertheless its simplicity gives the BenQ EL2870U a cohesive look, and its matte black chassis is relieved by a grey, subtly brushed-metal-effect on that thicker bottom bezel. The monitor’s foot features the same finish, while the stand is finished in piano black.

Thankfully, this latter part is the only one to potentially pick up fingerprints and smudges, and due to its position this is unlikely to occur. Obviously, matte bezels also avoid the annoying reflections that can mar the screen surrounds of shinier counterparts. 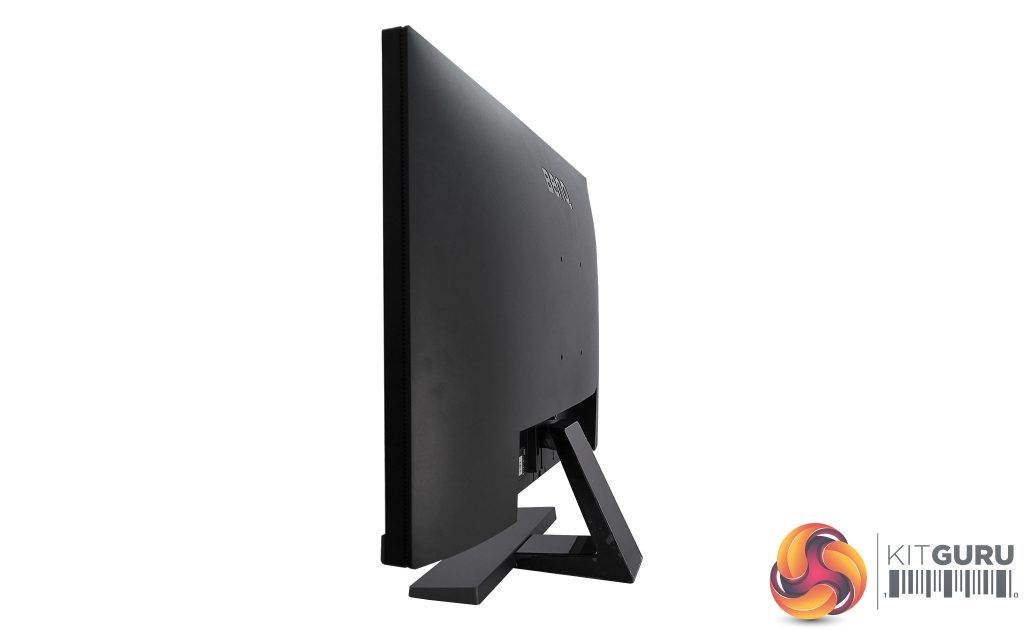 Build quality is on the better side of average for a consumer-oriented computer display, meaning there was no discernible flex or creak anywhere on the bezels or chassis. We guess this is the major upside to the utilitarian design on display here (pardon the pun), and if you’re the type who likes to bring a monitor of this kind of size to LAN events, we reckon the EL2870U will hold up better than many affordable rivals and alternatives to life’s little knocks and bumps. 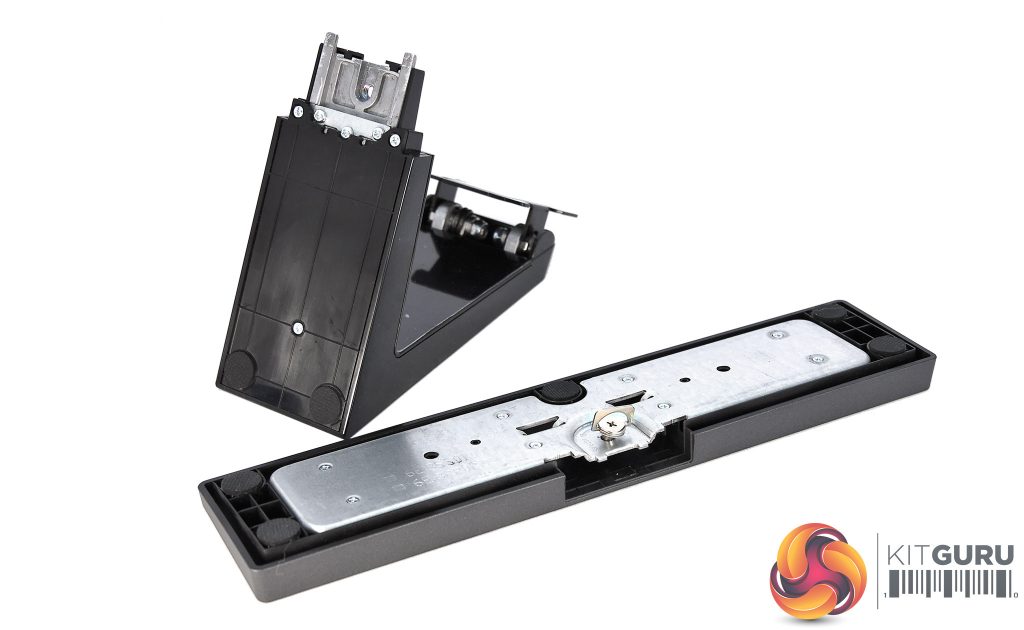 Unfortunately physical setup is surprisingly involved for a monitor with a simple stand: the foot attaches to the stand easily with a thumb-screw, but attaching the stand to the chassis requires a screwdriver to tighten things after you’ve clicked it in. And of course, the resulting monitor package only offers tilt, sans height, swivel or pivot – though at least there is provision for VESA mounting, so you can attach the EL2870U to a third-party stand that can provide any level of flexibility you wish.

While the selection of ports BenQ offers on its EL2870U isn’t particularly generous, we’re pleased to see that they’re all up to the latest standard – or close enough. Naturally this would be expected on an HDR-compatible display, but given the… limited HDR implementation, we would not have been surprised to see corners cut here.

As it stands, on its right side the EL2870U gives you twin HDMI 2.0a ports, along with a single DisplayPort (DP) of the latest and greatest 1.4 variety. Where many TVs support the even newer HDMI 2.0b standard these days, that version’s most significant update is support for HLG (Hybrid Log Gamma), which is a feature more desirable for televisions than PC monitors, so we can easily forgive its absence. 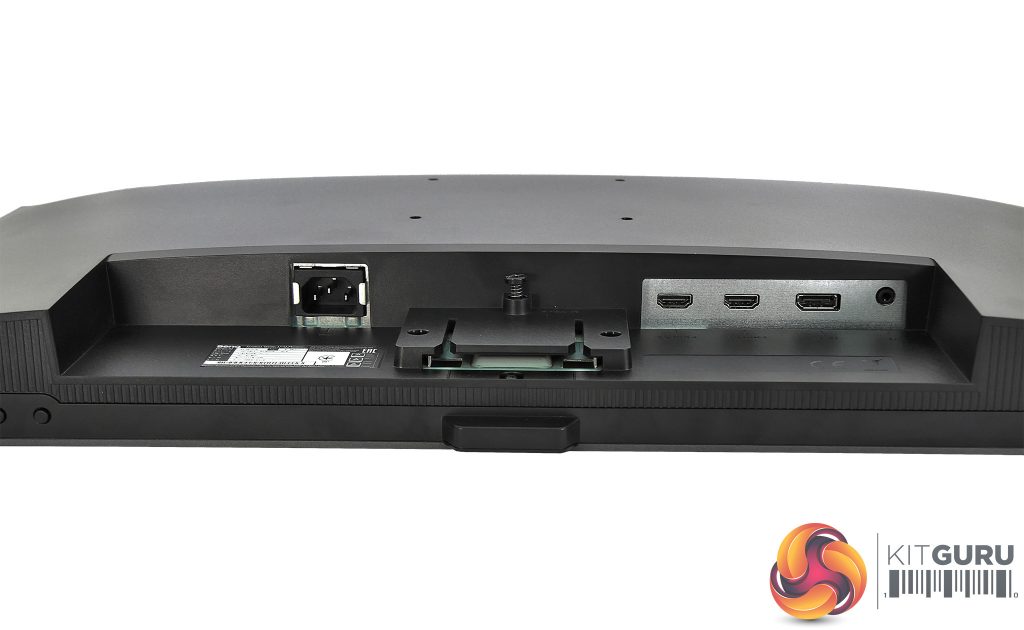 For audio duties there’s a single 3.5mm headphone jack to supplement the integrated speakers. Finally on the left we have the power input in the form of a standard kettle lead, a far preferable option to the external PSUs of many slimmer displays.

All the ports are down-facing and not visibly marked, which makes for a clean chassis but also makes it very awkward to hook everything up.So if you’re going to be plugging headphones in regularly, we would recommend leaving an extension cable attached permanently to BenQ’s monitor.