As an HDR entertainment display, the BenQ EL2870U is quite frankly a failure.

Alas, this is one of the common breed of HDR-compatible monitors that can accept an HDR source but don’t meet any of the key specifications to actually display HDR properly (aside from panel bit depth). Basically, if you try hooking up the EL2870U to a PlayStation Pro, Xbox One X, UHD Blu-ray player or PC that can output HDR and try playing a game or movie mastered in high dynamic range, prepare to be disenchanted with the results.

If you’re after a ‘proper’ HDR monitor, you should look at a model that meets or exceeds the VESA DisplayHDR 600 spec, like the Samsung C32HG70. It is worth noting, though, that the C32HG70 will cost you almost double what you’d pay for the EL2870U, so the two are not comparable in that regard. It only goes to show you have to pay significantly more for a ‘proper’ HDR monitor. 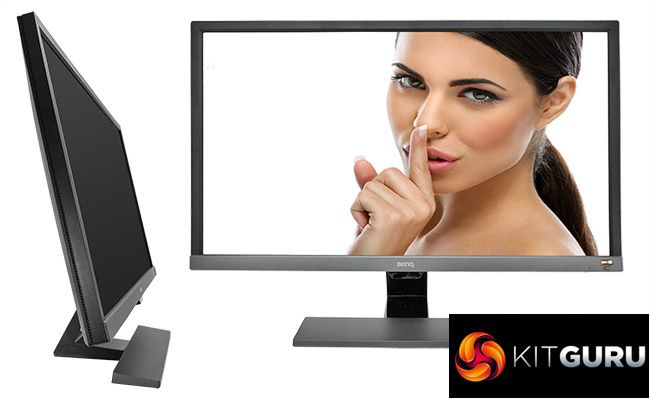 However, if you think of the ability to process HDR as a rarely useful bonus, BenQ has a perfectly decent SDR display on its hands. Its price is in line with many other high-end 28in TN-based UHD monitors, most of which don’t offer HDR compatibility anyway, and it offers a few nice touches, like the surprisingly effective Super Resolution which artificially adds ‘sharpness and detail’ to lower quality video, or BenQ’s Brightness Intelligence Plus which uses a light sensor to dynamically adjust the monitor’s luminance level according to your environment’s brightness.

For productivity any UHD display will give you a great amount of working space, and at 28 inches this resolution is just about usable – though for a more comfortable experience we would recommend setting Windows’ scaling to around 125-150 percent. Just keep in mind that there is still quite a bit of Windows software that does not scale properly.

For gaming, we feel that BenQ’s designation of its EL2870U as a casual gaming monitor is just about spot-on. It maxes out at 60Hz, offers a FreeSync range of 40-60Hz and doesn’t support LFC, so it doesn’t really appeal to the hardcore crowd like 144Hz models such as the AOC G2790PX.

Unfortunately, neither the EL2870U’s panel type nor its uncalibrated image quality lend themselves to serious graphics use either, so photographers and digital designers or artists should probably look elsewhere. It’s also worth noting that we’ve seen one or two similarly-specced competitors, like the AOC U2879VF, at under £300 (though having not reviewed this model we can’t comment on its performance).

KitGuru says: The BenQ EL2870U doesn’t quite cut it as an HDR display, but when taken as an SDR monitor it’s a more interesting proposition with some nice touches. However, while it doesn’t suffer from any glaring faults it also doesn’t excel in any particular area, so make sure it will match your usage before purchasing.