To test the Ventus X RGB, I used it as my daily driver for one week. During this time, I used it while playing games, for editing photos and for general use as well.

I’ve never been too keen on Tt eSports’ software in the past – it looks a bit garish and clunky to me – but it is still functional so I can’t complain too much. You get control over all the important areas like button assignment, RGB lighting and macros, while users can also create up to 5 different profiles.

Incidentally, those 5 profiles can also be saved directly to the mouse’s internal memory, so you can take your settings with you on the road without worrying about installing the software everywhere you go.

Moving on to the RGB lighting, it is fair to say that the Ventus X RGB does well here. The colours are accurate and bright, while it is also good to be able to control both lighting zones independently of each other. My only point of criticism is that when the Tt eSports logo is illuminated, it is noticeably dimmer towards its outer edges – a result of the logo being lit by a single LED placed centrally. Maybe a second would’ve helped, but it is quite a minor point.

I’ll start with ergonomics as the size and shape of the Ventus X RGB does mean it won’t be for everybody. What I mean is, due to the large size – it is noticeably wider than other mice I have tested recently – the Ventus X RGB definitely favours a palm-grip. You can still use a claw-grip, but it certainly doesn’t feel as natural. Those with smaller hands may find the Ventus X RGB a bit troubling as well.

I am happy to use a palm-grip, though, and had no issues with comfort during my testing period. It is just worth noting that the Ventus X RGB’s shape won’t suit all grip styles equally.

Another thing I want to talk about is the ‘aerodynamic’ design of the mouse, as Tt eSports reckons the honeycomb mesh section should help keep your hand cooler during prolonged gaming sessions. Now, I must admit my hands don’t tend to get too sweaty while gaming anyway so perhaps I am not the best person to judge here. However, I can’t say I noticed much of a difference between using the Ventus X RGB and, say, the ASUS ROG Strix Evolve that I tested recently. My hand certainly wasn’t hotter than usual, so I don’t mind the mesh at all, but speaking personally I’m not too sure how much of a difference it really makes.

That being said, I was still a very happy gamer when using the Ventus X RGB. It’s side buttons are well positioned for easy use in games like CS:GO and Star Wars Battlefront, while I was also able to keep my grip on the mouse at all times.

The PMW 3360 sensor is another noteworthy inclusion, particularly in this sub-£60 price bracket. The PMW 3360 is considered by many to be a class-leading optical sensor and I had no issues with it – tracking was accurate and acceleration-free at all times. I was also able to edit my photos using Photoshop with the accuracy and consistency that I am used to, so top marks there.

Lastly, the weighting system is another welcome feature. I personally left all the weights in, giving a total weight of 146g (including the cable) but that is obviously highly subjective – many readers may well prefer it with all the weights removed! Still, many mice don’t include a weights system – even those which cost considerably more than the Ventus X RGB – so it is definitely a very good feature to have.

Previous Samsung announces it is working on a smart speaker after all
Next Half-Life’s lead writer just revealed the plot behind Half-Life 2: Episode 3 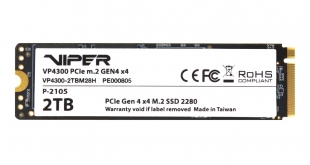 Patriot's latest PCIe 4.0 SSD doesn't use a Phison controller - it's from Innogrit instead