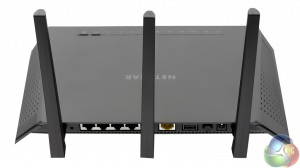 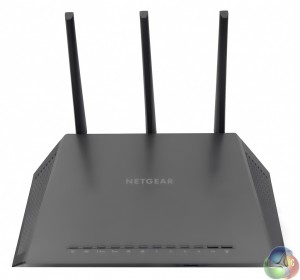 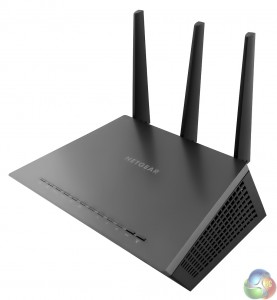 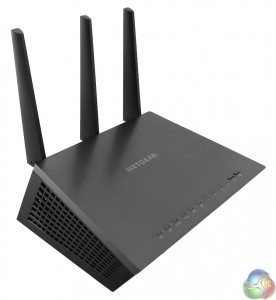 At the rear of the router we find (from left to right) a reset pinhole, four Gigabit Ethernet LAN ports, Gigabit WAN Ethernet, a USB 2.0 port for printer support, the power button and a jack point for the power supply. The three chunky antennae are arranged to give you plenty of clearance to connect the cables.

At the front of the R7000 we have a row of activity LEDs with two control buttons on the right hand side. One button toggles Wi-Fi on and off while the other is used for WPS.

Also at the front you’ll find the USB 3.0 port for connecting a flash drive or external hard drive. Apart from the convenience of having the port at the front, it seems likely the location was chosen to ensure the port is a healthy distance away from the Wi-Fi radios.

The inclusion of a power button on the rear and Wi-Fi button on the front are useful features as there are times you need to turn off parts of your network when you are fixing problems or sorting out the best way to make a connection. It can get tedious yanking the power cord (or flicking the mains switch) and disabling Wi-Fi in the set-up screen is usually a chore. Well done Netgear. 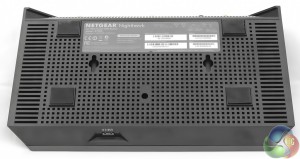 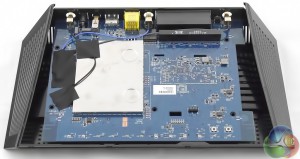 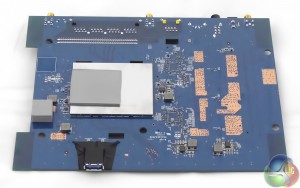 Whip out five screws from the bottom of the casing (four of them under the rubber feet), pop the lid off the casing and the innards are revealed. The hardware is mounted on a single PCB with an EMI shield on the top and heatsink on the bottom. There are three thermal pads to conduct heat to the bottom casing. During our testing of the router the chassis felt slightly warm but was never hot or uncomfortable to touch.

There is no interesting hardware on show, however we understand the silicon consists of a Broadcom BCM4709 SoC that uses an ARM Cortex-A9 processor. 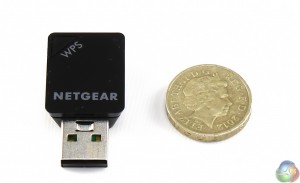 Netgear sent an A6100 USB adapter to supply 802.11ac, which is critically important as we were treating the router and adapter as an upgrade for an Intel laptop with Centrino Wireless-N802.11n, but lacking 802.11ac.

This tiny piece of hardware costs £29 inc VAT is very compact and only projects 25mm from the laptop chassis. One corner of the adapter houses a WPS buttons, and while this is an impressive feat of packaging you have to wonder where they locate the antennae in such a small device. 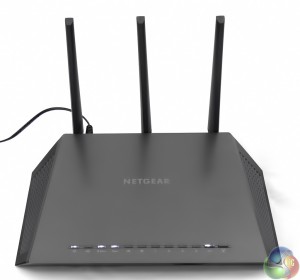 Once the R7000 is powered up it has a bit of a think for a few seconds and then settles down with a series of pale blue activity LEDS. You’ll have to look quite closely in the photo to see the lights as they aren’t especially bright, although you’ll have no problem seeing them when you stand close to the router.

That may sound like a problem but it is nothing of the sort and much better than the disco light system you get with so many routers as they flash away for no apparent reason. If you choose you can disable the flashing lights in the set-up screen or even turn them off altogether.