With ever more monitors switching to the easy-to-use joystick OSD control method, including Iiyama’s own G3266HS-B1, we were a little saddened to see the more traditional buttons on its GB2530HSU.

They’re well-spaced and clearly labelled, but these labels will be practically invisible in a dark environment, and to acerbate matters even further they’re all the same size and shape, making it too easy to accidentally turn off the display when you were only trying to press Enter.

On the positives side, all these buttons offer a decent click and solid action, leaving you in no doubt to whether you’ve pressed one. And while the small blue power LED nested next to the power icon on the bottom bezel cannot – as far as we could tell – be turned off, at least it’s fairly unobtrusive. 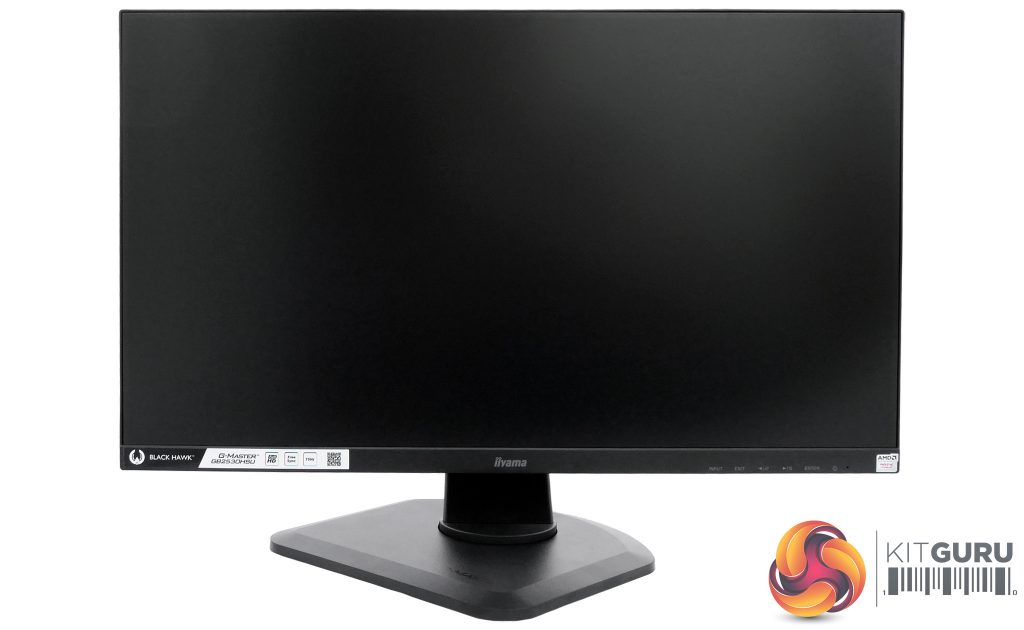 The first control on the G-MASTER GB2530HSU Black Hawk is labelled Input and this does what it says on the tin, letting you switch between its three video inputs or Auto, which picks the input with an active signal. Next is Exit, which does exactly that while navigating OSD menus but also acts as a direct shortcut to a very extensive selection of image presets, including: Standard, Sport Game, FPS Game, Strategy Game, Text, and no less than three User modes. We will discuss some of these further in the Image Quality and Gaming sections of this review.

After Exit we have Left, which also offers three ECO modes, and Right, which gives quick access to the volume, with 50 as its default value. Last and most importantly we have Enter, which also gives access to the main OSD. We must say, Iiyama has really surprised us here with a very unusual menu. It’s a minimalist affair that consists simply of a single list for each section, which makes for a clean look albeit with lots of entries. 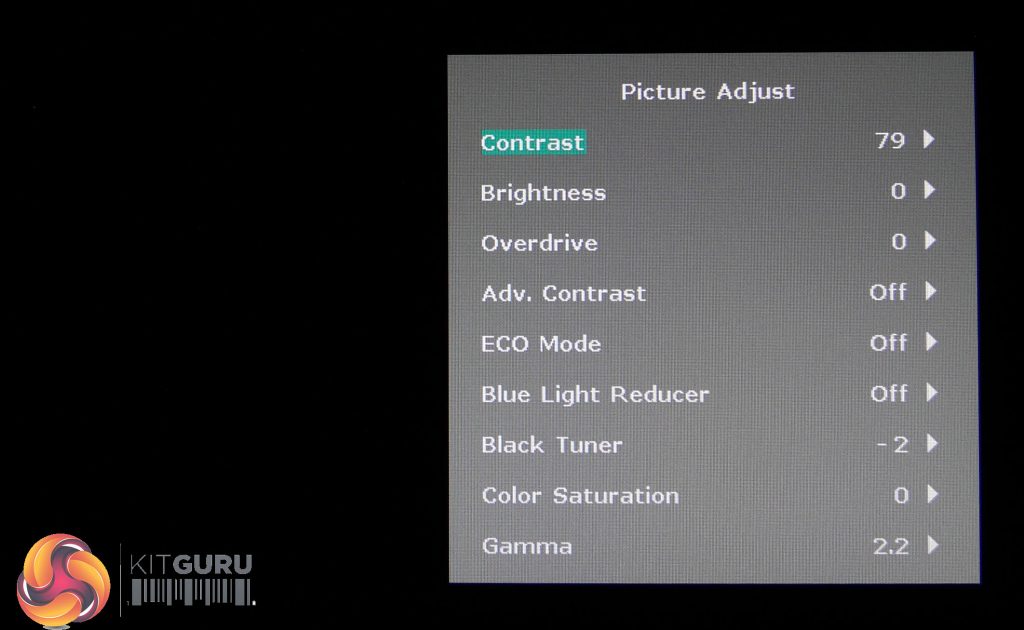 In Picture Adjust, you’ll find controls for Contrast, Brightness and Overdrive, the latter of which offers a few more presets than the usual normal/fast/faster. Instead Iiyama here offers Off/-2/-1/0/+1/+2. This is a little confusing as the user might be left wondering what the difference is between Off and the default 0, or why a setting that traditionally increases something (the overdrive applied to the liquid crystals that make up an LCD panel) even has minus figures to begin with…

Moving past this oddity, we assume Adv. Contrast refers to that old chestnut Dynamic Contrast. Next up we have ECO Mode, also accessible directly from the Left control button. This is followed by the self-explanatory Blue Light Reducer, which – despite sounding like the corny title of a bad 80s science fiction flick, just offers three modes to reduce the amount of potentially harmful blue light the monitor emits.

This is followed by a setting that should have been closer to Contrast, namely the Black Tuner. As its name suggests this can lower or raise the screen’s black level, giving you ‘deeper’ blacks at the cost of dark detail, or washing out the display but ensuring you can see even the darkest grey pixels. This can give gamers a competitive edge by letting them see hidden enemies, and while in theory a great display should not need such trickery (and some might suggest a gamer worth their salt shouldn’t be reduced to it), we are talking about a £125 TN-type panel here, so it’s nice to see.

For the G-MASTER GB2530HSU Black Hawk in particular, it helps to combat the panel’s washed-out, milky appearance out of the box. We found setting Black Tuner at -1 improved visual contrast without crushing any dark detail, while knocking it down to -2 still kept nearly everything intact but made blacks look… black, rather than grey. In fact, we discuss the shocking difference this setting makes in the Image Quality section of this review. 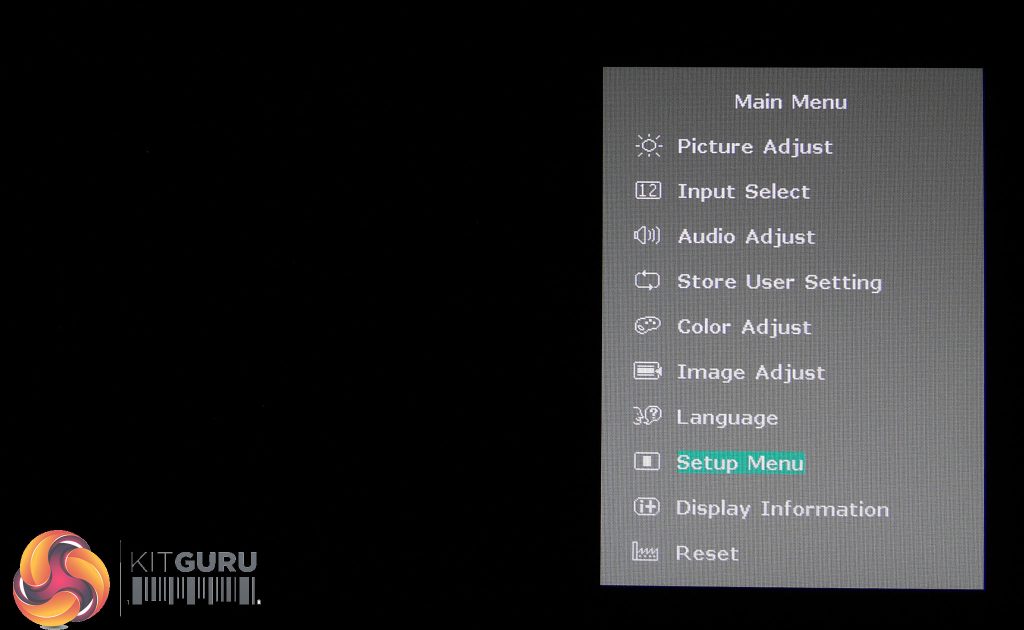 Similarly, if you want a little more vibrancy to colours which tend to fade quite quickly on this TN panel, it’s definitely worth nudging the Color Saturation slider up a bit; we found that anything between seven and eleven gave everything just a bit more punch without making colours appear too garish – and it improved colour performance across the board! Last on the Picture Adjust list is Gamma, which can be set at either 1.8, its 2.2 default, or 2.6. We’d recommend leaving well enough alone in this case.

Moving on to the other main menus in the OSD, we have the aforementioned Input Select; Audio Adjust which lets you adjust volume, mute/unmute and choose the digital audio source; and Store User Setting for the three user modes (did this really require a separate menu entry Iiyama?).

Color Adjust is where you can select between colour temperatures using our least favourite naming of Cool, Normal or Warm – nothing wrong with this for the average user but please include colour temperature figures too – or you can tinker with RGB under User. 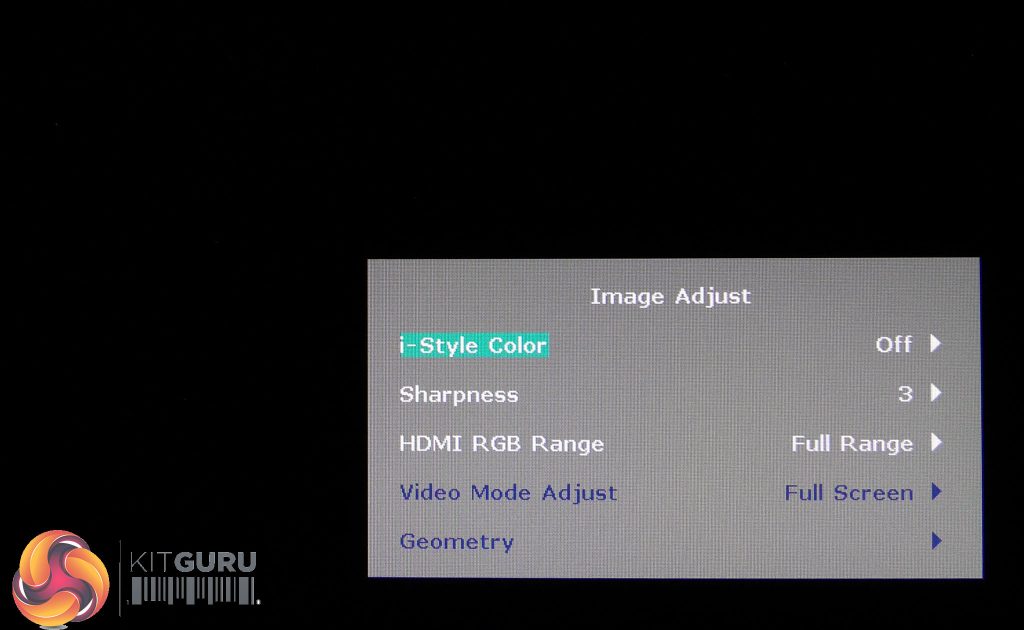 Image Adjust contains “i-Style Color”, Sharpness, and console-oriented settings like HDMI RGB range, which should always be set to full when using the G-MASTER GB2530HSU as a PC monitor. Other menu titles like Language, Display Information and Reset are self-explanatory, but a last honourable mention must go to Setup Menu, where you don’t just control the OSD position and time-out, but also whether the Iiyama logo appears when the monitor starts up – and, though we have no idea why it’s hidden here, whether you would like FreeSync to be turned on or off. We would strongly suggest Iiyama keeps this near the Black Tuner, instead, or even creates a dedicated Game menu. This is, after all, sold as a gaming monitor.

Out of the box, this little Iiyama consumes around 16.5W, while pushing 226 cd/m2 (also known as nits), just a tad below its 250 maximum. To achieve that maximum we moved the brightness slider from its default 80 to 100, which gave us 255.5 nits while drawing up to 18.5W. It’s nice to see these figures all fall below Iiyama’s official spec, which mentions power consumption of 19.6W. 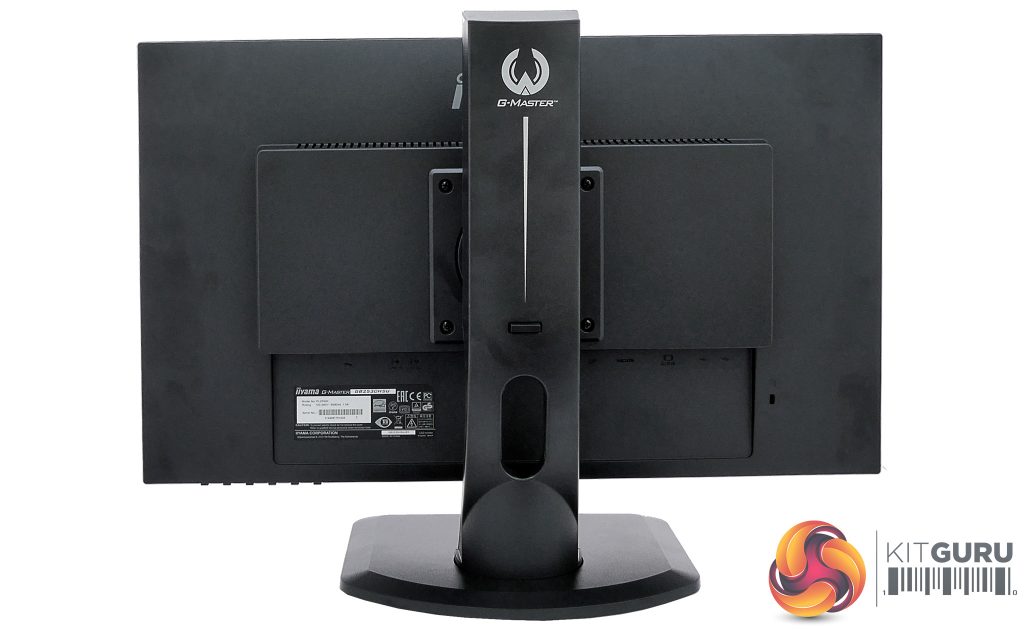 Achieving our preferred calibration target of 120 nits required sliding Brightness down to 10, which also lowered power draw to 11W – incidentally lower than the least bright ECO setting. Meanwhile, after knocking it all the way to zero our G-MASTER GB2530HSU was still putting out 104 nits, which is quite a bit higher than we like to see for a monitor’s minimum brightness level, especially for anyone with tired eyes working in a dim environment. Concordantly, consumption didn’t change much at 10.5W.