Paradox on piracy: service over security

Every game developer and publisher knows that at least a portion of their player base is going to be composed of people that didn’t pay. In the past, they’ve tried to stop this with CD keys, code wheels and invincible scorpions that chase you around the map, but Paradox does things a little differently. Its plan is to update its newly published game, Cities: Skylines so much – for free – that the Steam version will always be more up to date and contain more content than the pirated ones.

As usual our plan for pirates is to make a great game even better through free updates – making it more convenient to use Steam instead.

The company’s stance on piracy was outlined by VP of Acquisition at Paradox, Shams Jorjani, who spent a few hours clarifying it late last week. He pointed out the relationship between Netflix and pirates, stating that the reason that service had such a big impact on them, was because it offered something that wasn’t readily available elsewhere.

This is a strategy that the publisher used previously with Arrowhead Games’ Magicka, which once received 14 updates in 13 days. At that point he said, even the pirates stopped bothering to crack it as there were just too many versions. Simply put, playing the Steam version after having paid for it was always going to be better. 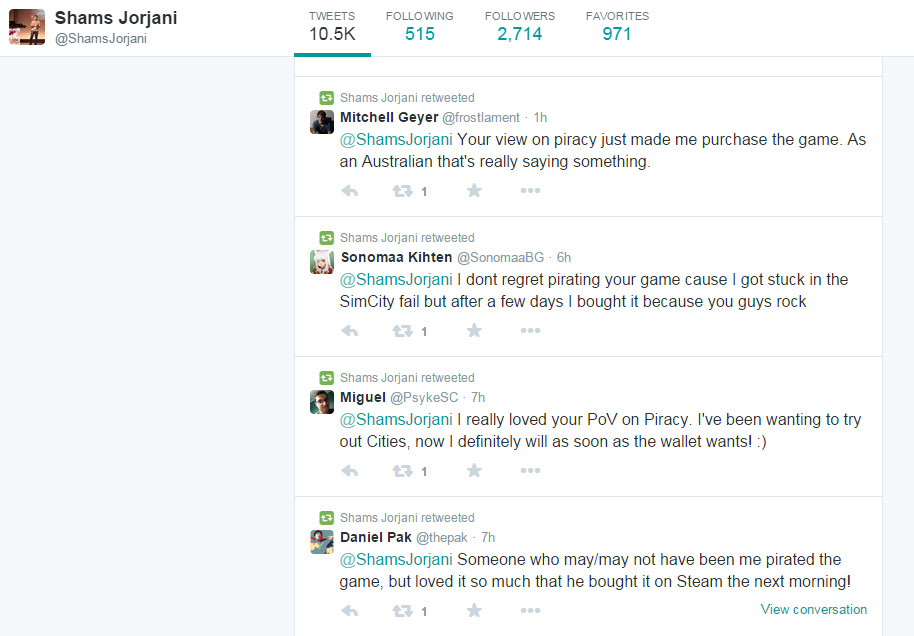 The best part of this announcement however, is that by not branding pirates as hated criminals it opened a dialogue window for them. Jorjani has gone on to receive many messages (some of which he retweeted) from people claiming that they had pirated the game. However, having enjoyed it and learning of all the free content updates that the Steam version would receive, they’ve gone ahead and bought it.

What’s also interesting to note from those messages however, is that it was the disingenuous, broken launch of official services like SimCity, which drove some of these city building fans to pirate Cities: Skylines. Clearly fan loyalty and trust is just as important as hitting pre-order targets.

KitGuru Says: This is the sort of goodwill that gamers appreciate. Other developers/publishers really should take note.