For the past few years, Gigabyte has been bolstering its reputation in the accelerated computing platform sector by building new systems featuring the highest GPU density in the market, combined with excellent cooling and power efficiency.

Gigabyte is adding five new systems to its 2nd generation AMD EPYC powered server lineup, bringing the total in its stable up to 28 launched this year so far. The G291 series has been one of the company’s most popular servers platforms, featuring an ingenious design that allows for a maximum of eight GPGPUs to be housed in a single U2 chassis. Inside the U2 chassis are four huge GPU bays with four large riser cards that can accommodate two dual width GPGPU cards each.

The Chassis design is not only optimised for GPU density but also for cooling, the bays being situated on either side of the chassis creates airflow tunnels, with air being pushed/pull through by fans on either end of the chassis. Gigabytes G929 series continues with this tried and tested design in its new 2nd generation AMD EPYC powered systems.

Gigabyte has also announced other models adding to the G482 series. The G482-Z50 can support up to ten PCIe Gen 3.0 GPGPU cards in balanced mode, with five GPU cards able to connect with a single CPU downstream via a PCIe switch, that minimises GPU to CPU latency. Meanwhile, the G428-Z51 is one of the world’s first PCIe Gen 4.0 servers released on the market, featuring up to eight GPUs supporting PCIe Gen 4.0, with each GPU connected directly to the CPU via PCIe root. 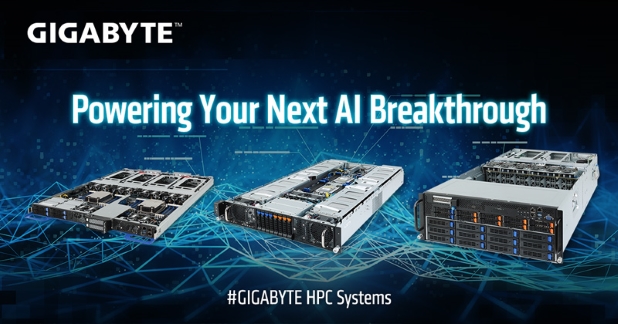 Gigabyte’s T181-Z70 is the company’s server product based on the Open Compute Project Standard and is designed for a 21” OCP rack featuring a separate PSU. Power is supplied to each server node by a bus-bar system running along the rear of the rack. The T181-Z70 is a 1OU RACKOLUTION-OP GPU computing node that features 1st or 2nd generation AMD EPYC 7001 / 7002 processors with four PCIe Gen 3.0 dual-width GPGPU bays in the rear, two 2.5” SSD hot-swap bays in the front and two additional PCIe Gen 3.0 low profile slots for add-in networking or storage expansion cards.

Gigabyte has further extended its server series with the G591-HS0, a 5U system that can house up to 40 PCIe Gen 3.0 x16 low profile add-on cards via two expansion slot trays. Along with a G241-G40 2U system featuring four PCIe Gen 3.0 x16 bays for GPUs, as well as offering optimal storage capacity via four hot-swap SATA / SAS drive bays and two onboard M.2 slots.

KitGuru says: Gigabyte certainly offers an extensive range of servers, customers wishing to get a closer look at the new systems will be able to check them out at the SC19 international conference for high-performance computing, which is taking place at the Denver Convention Centre from 18th – 21st November.