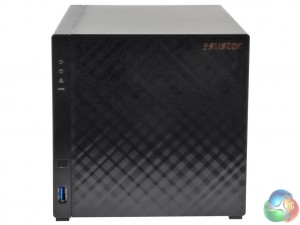 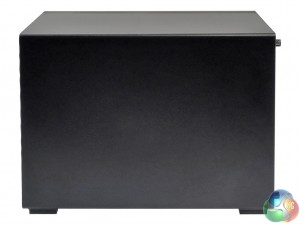 Asustor has given some thought about the AS3104T's design as it's not the usual nondescript box that NAS units tend to be. The front bezel has a striking gloss finish that the company has called diamond-plate, which is set off by a brushed finish panel on one side that holds the indicator LEDs, the front USB3.0 port and an IR receiver, (for the remote control unit which is an additional purchase).

All in all, it makes for an attractive looking NAS. It's also a tool-free design with thumbscrews holding the cover and drives in position.

The four vertically stacked LED’s display power, system and network status and disk activity. These lights can be programmed via the ADM OS to adjust their brightness and to set up night time modes for them. 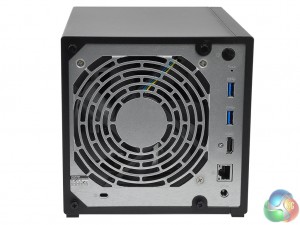 The rear panel is dominated by the grill for the large 120mm cooling fan which is very quiet in operation. The panel holds two USB3.0 ports, single Ethernet and HDMI 1.4b ports, the power in port, a Kensington lock slot and the power button. The only question we have about this location for the power button is ‘why?'

On a NAS it must be the most awkward place to house it. If you think that the vast majority of NAS units are either located on a shelf or in a cupboard where rear access might be restricted, then it's the last place you want the power button to be. 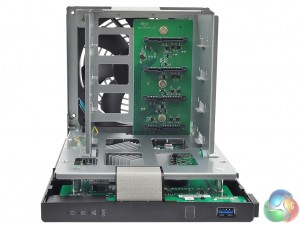 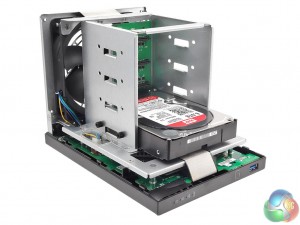 As previously mentioned the drive bays are tool-free thanks to the drives being secured by thumbscrews. Unfortunately, the AS3104T's design means that the drives are not hot-swappable but it any case it's a moot point; in a home environment, how many times would drives be swapped out anyway?

The bays support drives with capacities up to 10TB, giving the AS3104T a total capacity of 40TB. 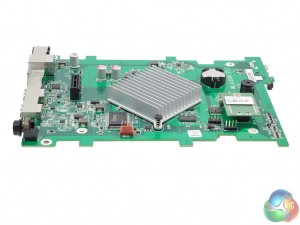 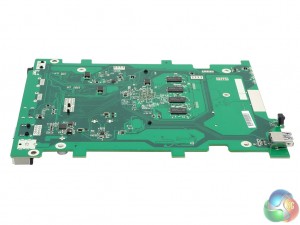 The uncluttered motherboard is dominated by the passive cooler for the 6W TDP Intel Celeron N3050. Positioned next to the processor are four Samsung K4B2G1646Q-BYKO DDR3L-1600 memory packages making up 1GB of the 2GB of memory the AS3104T has. Also on this side of the board are an ITE IT8728F IC monitoring the system, a Texas Instruments SN75DP139 IC providing HDMI 1.4b support and an ADATA IUM01-512MFHL flash memory chip which stores the AS3102T’s firmware.

In contrast, the rear of the board appears quite Spartan. There are four more Samsung K4B2G1646Q-BYKO DDR3L-1600 memory packages making up the remainder of the memory and a Broadcom BCM57781 IC supporting the single Gigabit Ethernet port.

The Celeron N3050 provides support for two of the four SATA 6Gb/s ports with the other two being controlled by an Asmedia ASM1061 IC which sits on the riser board that houses the SATA ports.