The Synology DiskStation DS119j uses a two-part design in a glossy white ABS plastic, with the white finish only broken by a dark grey vertical panel on the front of the unit, the back panel and its black rubber feet. It’s this grey panel that holds the power button and three indicator LEDs; Status, LAN and Disk Activity.

The rear panel of the NAS is dominated by the grill for the 60mm cooling fan. The fan itself is a YS Tech FD126015LL which has a Sintetico bearing and a maximum spin speed of 3,100rpm. It has an airflow rating of 15.9CFM and a quoted noise level of 22.5dB(A). Under the grill sit all the ports; two USB 2.0 (vertically mounted) and a 1GbE Ethernet port. To the left of these is a Kensington Security Slot. 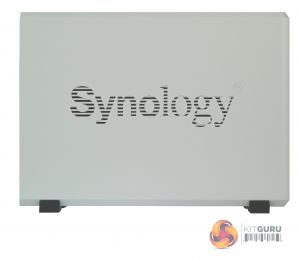 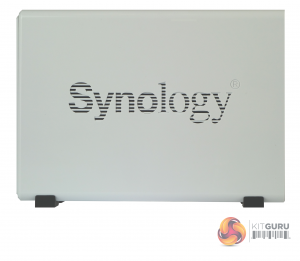 Both side panels of the DiskStation DS120j enclosure have the Synology logo cut into them which not only looks good, also helps with keeping the internals cool. 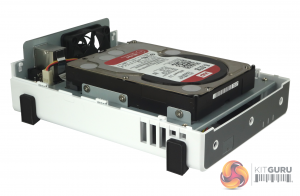 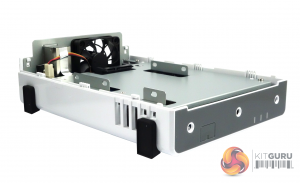 To get to the drive bay you simply slide the two sections of the NAS apart. If in doubt about how to do so, there is a little diagram on the sticker on the base of the unit which shows which way to move it. Straight out of the box the two fixing screws (one at the top and one at the base of the rear panel) aren’t in place but Synology includes them in the box bundle. Fitting the hard drive isn’t a tool-free exercise as the drive is held in place by six screws.