If you'd asked me a couple of weeks ago, whether I'd like to trade in my wired mouse for a wireless one, I'd have thanked you with a polite smirk and told you that since I work and play with mine 12 hours a day, I don't want to be changing batteries or worrying about charging it on a regular basis. Nice of you to offer though. But that opinion was turned on its head when I visited Lausanne, Switzerland to look at Logitech's G Labs testing and development facility, where not only did I see all of the work that goes into making its peripherals, but I learned about its big push for wireless mice and how it thinks that the much-maligned technology is ready for a comeback.

Battery life, as I mentioned above is one of the first big concerns of anyone that brushes off wireless peripherals, specifically mice, as being unusuable for any big PC user and especially when it comes to hardcore gamers. Nobody wants their mouse to die in the middle of a game, that's very understandable.

But that's why Logitech's last wireless mouse in the G series, the G602, has a ‘standard' battery life of over 250 hours. In endurance mode, that extends to almost 1500 hours, which for the non-gamers out there should still deliver enough performance day to day.

Of course we reviewed that mouse back in March this year and it wasn't even new then, so this is hardly news to you guys, but Logitech didn't just put that mouse out because it wants to offer a quick alternative to its wired offerings. Logitech actually has a big investment in wireless technology, so much so that it has a half million euro test set up in its HQ's basement, just for making sure they work well. 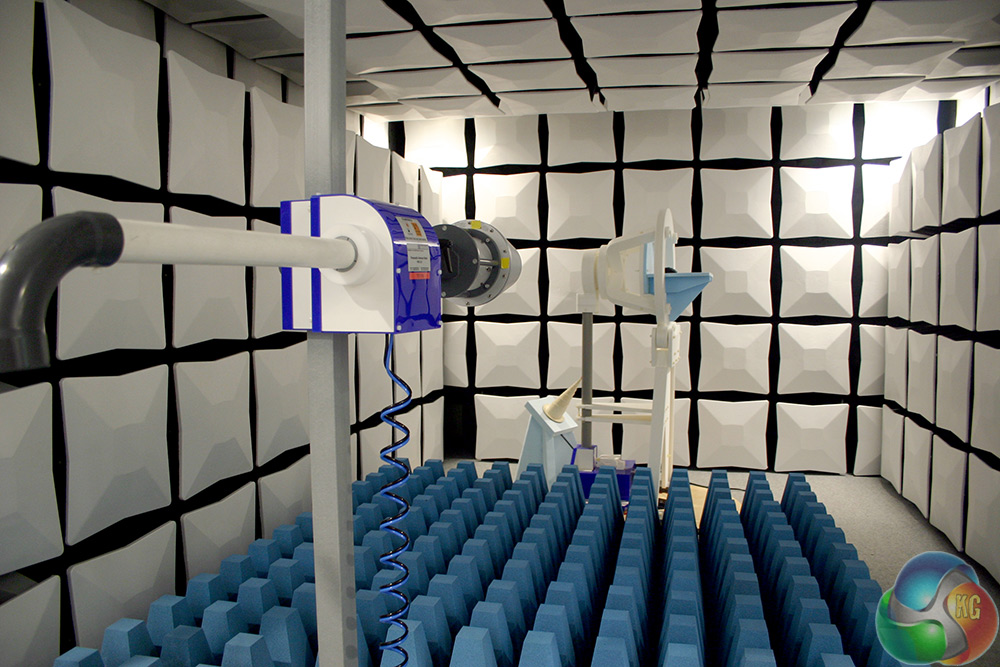 While called an anechoic chamber, this one doesn't absorb sound, but ‘radiation' such as phone signals.

Remember this room? I talked about it very briefly in my recent coverage of the Logitech facility. If you haven't read it yet, I suggest you check it out, as it's a fascinating insight into how some of the world's best gaming hardware is made, tested and put through its paces by the professionals.

Today though I want to focus on wireless mice and why Logitech is pushing the technology when the general consensus from gamers is that it's not what they want. Of course wireless has some lovely advantages: you aren't tethered by a cable, which means no drag and no getting caught on all the other cables behind your PC. It also makes transport easier and is perfect for some of those slightly stranger set ups, where your rig is in your living room or similar.

There are down sides sure, but battery life is no longer really one of them. Yes the G602's sensor isn't the most sensitive, but if you follow professional gaming, you'll know that actually when it comes down to it, higher accuracy is far more important than increased speed. You can always move your arm faster, you can't always make your mouse more accurate.

So what is it that Logitech is working on to try and improve gaming mice for the world of wireless? Lag is almost non-existent at this point too, so that's not too much of a problem.What is however is interference.

We live in a much more connected world than we did just a decade ago, but that world isn't connected by wires. Bluetooth devices, mobile phones, WiFi, radio, digital TV broadcasts and many other endless stream of data that we swim through everyday without even realising it.

But potentially your wireless gaming mouse could. Especially if you're on an Esports stage with nine other gamers all using wireless mice, with wireless webcams and 40,000 fans all trying to take your picture with their mobile phones. That's a lot of potential interference.

Hence the anechoic chamber with the ferrite panelled walls. 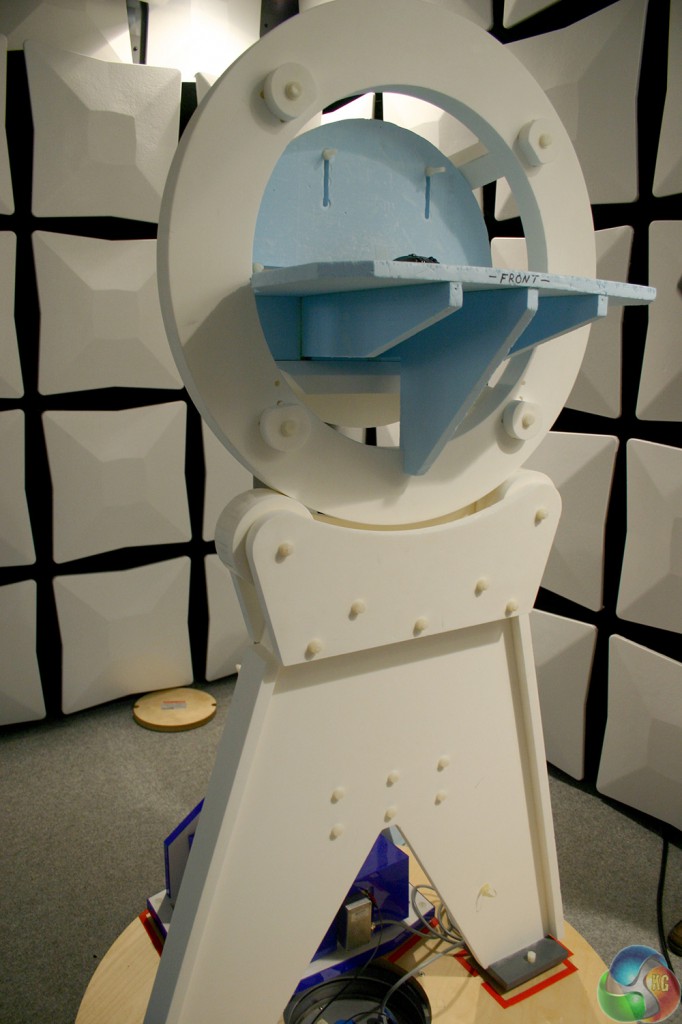 But what happens in there? Well, that contraption above has a mouse strapped to it (you can see it poking just above the blue shelf). It then rotates 360 degrees one way and 360 degrees the other, with Logitech using that giant contraption that looks like a Dr Evil “laser,” to record the strength of its wireless signal from every angle. The anechoic chamber makes sure that no outside interference messes with the reading. 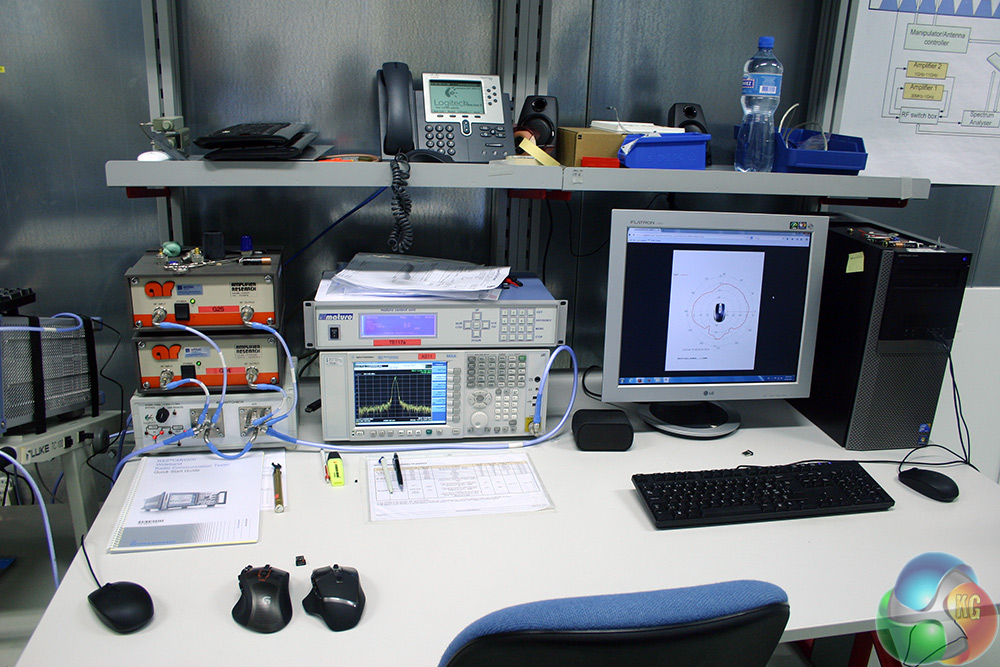 That information then gets output here. That display there is showing you the map of how strong the wireless mouse' signal is in every direction. Logitech's aim is to make it a perfect circle, so that no matter where its customers place their wireless receiver, they'll be able to use their mouse to its fullest.

How does this test for interference though? That's why Logitech has another device (seen above, hiding behind the turn table test-setup) which is able to project all kinds of different wireless radiation out to try and mess with the mouse's receptor.

Logitech informed us that for now, none of its wireless mice can be interfered with in this manner. When I asked whether there was potential for deliberate interference with wireless mice – something that could be worth doing considering some of the big money riding on the biggest eSports competitions these days – Logitech didn't appear concerned. 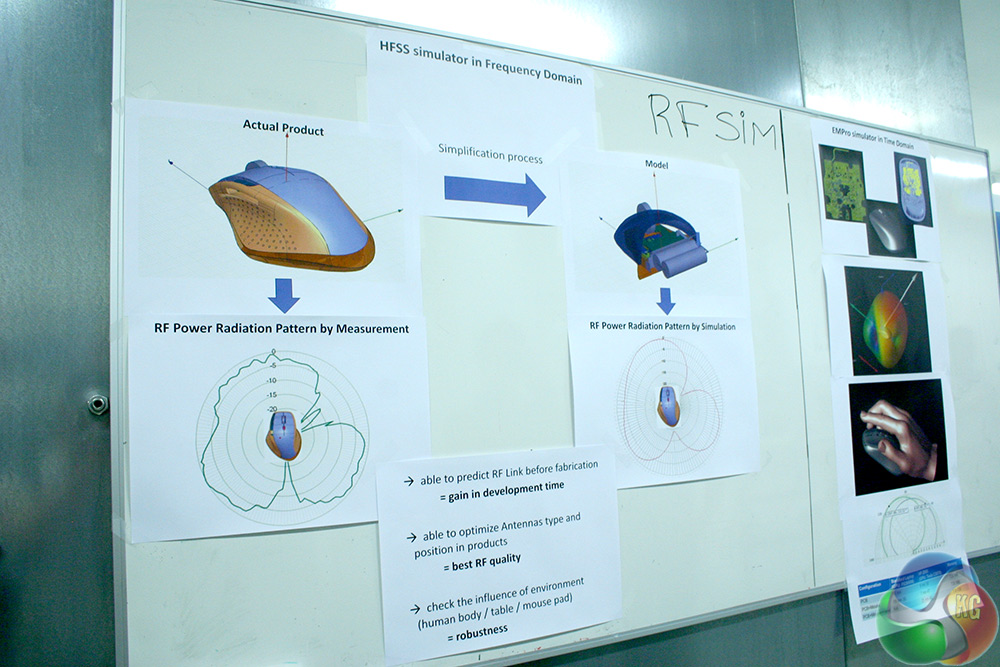 Once its wireless mice have been confirmed not to have any particular radiation drop outs, it's back to the pro gamers for more testing. While none of the ones we spoke to on the day copped to using a wireless mouse on a regular basis, they did all give positive feedback on Logitech's G602, so it is somewhat endorsed by the pros.

KitGuru Says: But what's your verdict on this? Does Logitech's stringent testing and advances in wireless response and battery life make you more comfortable with the idea of making your next mouse purchase a wireless one? It certainly wouldn't come with any cable drag and carrying it about would be much easier.