My test set-up is somewhat different to the usual KitGuru regime as I do not have Gigabit or 10Gbe switches lying about the place. That’s OK as the DS214se is aimed at the mainstream user with more humble hardware such as my Virgin SuperHub which is made by Netgear. Connected to the router I have a homebuilt Windows 7 PC powered by an Intel Haswell CPU and running on a SanDisk Extreme II SSD.

I copied folders of files back and forth between the Windows 7 PC and the Synology, timing each transfer. One folder contains two hefty MKV files that total 10GB while the other contains 240 photos that total 500MB.

I ran each test ten times, took an average of the times and then calculated the transfer speed. 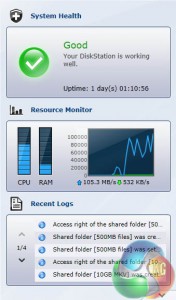 Downloading the 10GB files from the DS214se ran smoothly.The Resource Monitor in DSM indicated the CPU was running at 70 percent load with the RAM at 20 percent. Although the meter said the speed was fluctuating between 45MBps and 70MBps my stopwatch gave a time of 133 seconds which comes out at 75.2MBps. This is short of the 102MBps claimed figure. 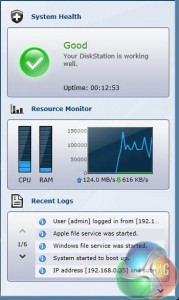 Clearly you would be unwise to compare my test figures with other NAS reviews on KitGuru as the test set-up is different however I also have a DS214 here and was able to perform back-to-back tests using the same WD Red drives. This first test showed the faster dual core processor in the DS214 was only loaded at 20 percent but more to the point the DS214 finished the job in 110.7 second which works out at 90.3MBps. 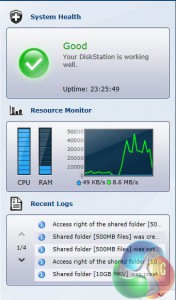 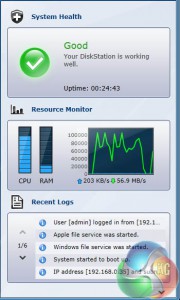 Uploading or writing the 10GB files to the two Synology NAS really showed the importance of the processor. The DS214se loaded the processor at 100 percent and limped along at 27.6Mbps. It took 361.8 second to complete which is just over six minutes.

By contrast the DS214 hammered the processor at 80 percent without reaching full load and the consequence is a time of 141.3 seconds and a speed of 70.8MBps which is two and a half times faster. 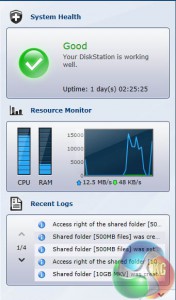 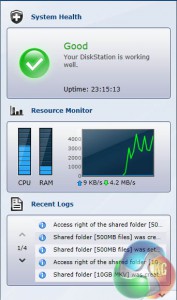 Uploading and downloading the 500MB of photos was less intensive and took the DS214se to 75-80 percent load. In both cases the DS214 was faster by a healthy margin but nothing like the amount seen in the 10GB upload test.

Noise
The DS214se is whisper quiet. The fan was almost inaudible above the background noise level in the room and didn’t top 45dBA. The hard drives were also very quiet and could be heard rustling away under load if you listened very, very carefully.

DS214 is slightly more noisy but the meter said the difference was less than 1dBA. It was undeniable the tone of the fan in the DS214 was slightly harsher. In both cases the WD drives ran at 30 degrees or less and were barely warm to the touch.

Power Demand
The DS214se draws 15W idling in DSM which rises to 17W during normal workloads. The highest figure I saw was 22W while installing the DSM software. These are the same figures as the DS214.

Previous $15.39 billion spent on video games in the U.S. in 2013
Next Kickstarter was hacked last week