We are as guilty as everyone else. KitGuru Labs spends a huge amount of time on the testing of graphic cards, CPUs, solid state drives and the like – knowing that once you’ve bought/assembled your PC, then you will be focused entirely on the screen, keyboard, mouse and monitor.

The KitGuru Annual Awards gives our team the chance to put special focus on peripherals – to make sure that you don’t miss any of the start products we tested in 2015.

Keyboard – Overall
Any solidly built keyboard with Cherry MX mechanical switches is likely to do well at KitGuru. The inclusion of RGB backlighting, anti-ghosting, wrist rest, a brushed aluminium frame and audio/USB connectivity means that almost all of the standard tick boxes have already been checked.

When you look and see a G.Skill, then that’s when the surprise element kicks in. Memory brands expanding out to peripherals is not new, but it’s an unusual move for G.Skill. So how well did they do? Well, we’ve already covered how good the underlying specification was – on top of which you need to say that the gold-plated cabling was neatly braded and the online price of ~£150 makes it one of the costliest options around.

KitGuru’s choice for the Best Keyboard Overall of 2015 goes to the G.Skill RipJaw KM780. 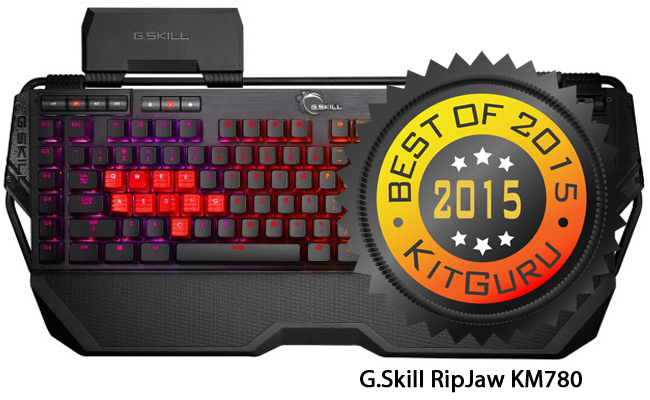 Keyboard – Mainstream
Big, solid IBM-feel keyboards are something that many in the KitGuru team absolutely love. There’s something satisfying about a nice, heavy ‘thunk’ when you hit a key – positive feedback to say that you’ve definitely hit it and it is ‘staying hit’.

Normally, we would expect that you be achieved with Cherry keys, but Thermaltake’s design team have opted for Kailh switches in the Tt eSports Poseidon Z Mechanical Keyboard. It’s worth noting that this design does not include either a USB or audio pass-through, although it does have a cable management groove and rubber feet.

Construction is plastic, rather than the brushed aluminium found in high end models, but the feel is solid and at £65, it is close to half the price of our overall winner. If you’re a quick typist that wants a fast action keyboard with positive feedback, this is for you. 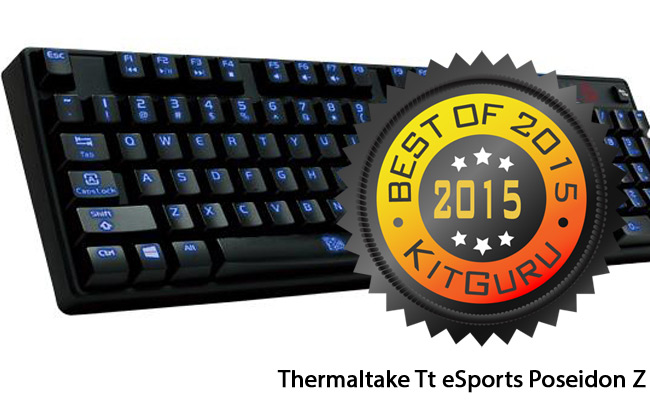 Mouse – Overall
When the Razer Mamba Chroma Wireless Professional Gaming Mouse arrived in KitGuru Labs, it was supplied at the ‘World’s Most Advanced Gaming Mouse’. Strong claim, but was it true? After extensive testing, we were forced to agree with the label. Build quality is excellent and the 16,000 dpi resolution is market leading.

Sure, we would have liked longer wireless gaming with a single charge, but 20 hours is longer than a person should game without a break and you can put it in its charging cradle when not in use. Effectively, this is a more advanced, wireless version of the Razer Tournament Edition, but it costs around £50 more.

That said, this is without doubt the best wireless gaming mouse you can buy – comfortable to use for extended periods and it pairs up with the rest of the Chroma family. Despite costing around £135, the fact that you can even buy it from supermarkets like Tesco, just goes to show the kind of appeal that Razer has – inside and outside the hard core gaming community.

For KitGuru Labs, the Razer Mamba Chroma Wireless Professional is the Best Mouse Overall of 2015. 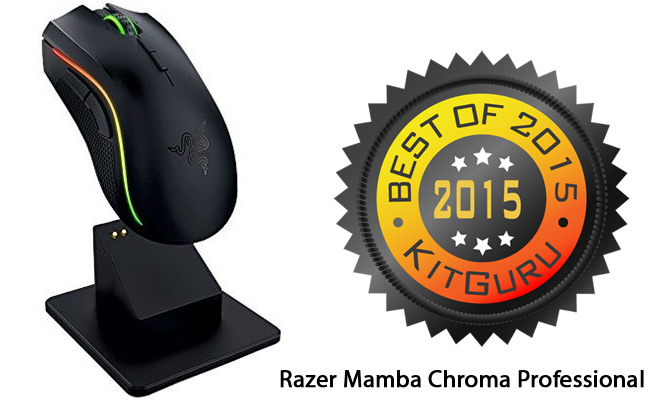 Mouse – Mainstream
With a basic gaming mouse starting around the £20 mark, the mainstream arguably extends up to just past £50. To spend more than £50 on a mouse, you’re going to have serious game in your locker or serious cash in your pocket – in either case you need to be looking at our overall winner.

That said, each person’s choice of mouse is a very personal thing. Layouts can vary for left and right handed people – with a gamer’s palm or claw grip also being significant factor – as well as the sensitivity (DPI). Of all the mice we used and tested in 2015, we’ve opted for a unit that combines an affordable price with a range of features and good build quality.

The Ozone Argon Ocelote World 8200 DPI Laser Ambidextrous Gaming Mouse has a stand-out name as well as a stand-out black and orange colour scheme. It has 9 programmable buttons and a non-slip rubberised surface coating with 128kb memory to hold up to 5 profiles for various games.

Accuracy and sensitivity are taken care of by the ADNS 9800 laser sensor. What makes this mouse all the more surprising is the price: At just over £42, it really is good value – especially when you consider the high quality braided cabling and the option to add an 18g weight to give a different feel.

KitGuru’s choice for the Best Mainstream Mouse in 2015 goes to the Ozone Argon. 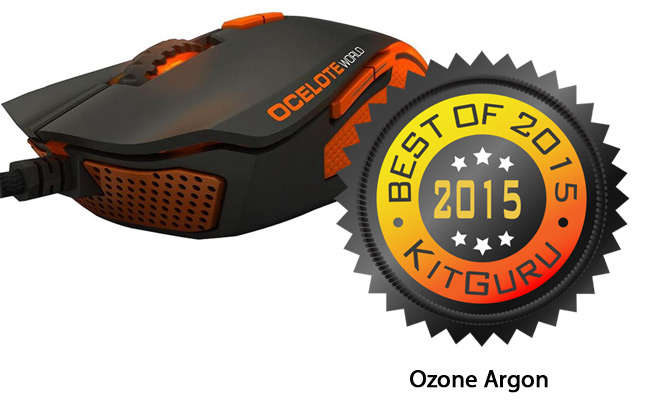 Headset
We all know the expression, ‘One hit wonder’. It perfectly describes the pinnacle of ‘beginner’s luck’. The world of high tech has seen plenty over the years. When our panel decided that the best headset of 2014 was the HyperX Cloud, we had no expectation that the same memory company would knock the ball out of the high-def audio park two years in a row. But they have.

The original HyperX Cloud made no attempt to create anything more complicated than stereo, yet did so brilliantly. The updated version takes your audio experience to a completely different level, by including its very own 7.1 amplification circuit to give gameplay a whole new feel. Feel the need to freak yourself out completely? Try Alien: Isolation with this headset cranked up in an empty house.

The in-built microphone provides crystal clarity for VOIP and the ear cushions are positively luxurious. Can you spend around £150 and get a better experience? Probably. But this headset is just £75 online and, at that price, it cannot be beaten.

KitGuru’s choice for Headset of the Year 2015 goes to the HyperX Cloud II. 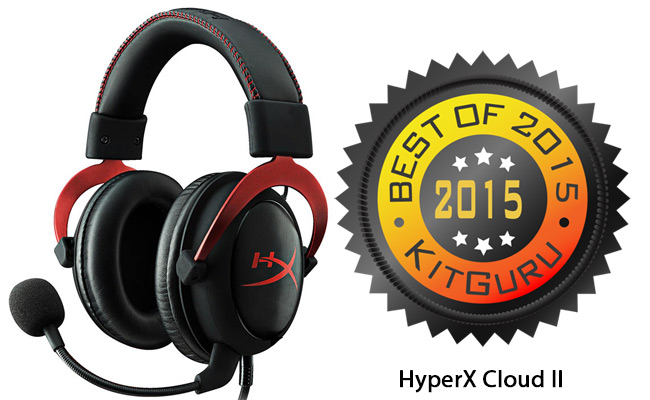 Speakers
If current trends continue, we may need to change the title for this award. The two best units we tried in 2015 were both ‘audio bricks. Single units with an impressive set of features and the ability to drive solid, clear audio.

While the BenQ treVolo brought a clean crisp sound to the KitGuru Labs, with its clever use of electrostatic technology and fold-flat design, it’s perhaps more of a companion to an HD projector in the living room than something a technology enthusiast would use around the house for gaming, films or music.

On the other hand, the Logitech sub-brand Ultimate Ears game us the very impressive MegaBoom at the start of 2015 and it remains the most impressive speaker system we have seen. Supplied as a single unit, which delivers 360 degree audio, deep bass and close to 100ft (30m) range wirelessly, it can also pair with a second speaker and survive immersion in water. Our reviewer described the output as ‘stonking’ – able to fill any room in your house – and adaptable enough to cope with any kind of audio profile.

During our testing, we discovered that it is waterproof up to 1 metre for 30 minutes and the Bluetooth connection to the source audio doesn’t stutter until you hit around 70ft (more than 20 metres). It’s available from a number of outlets, including high street stores, for less than £200 in black, red or pink.

KitGuru’s choice for the Best Speaker System of 2015 goes to the Ultimate Ears MegaBoom. 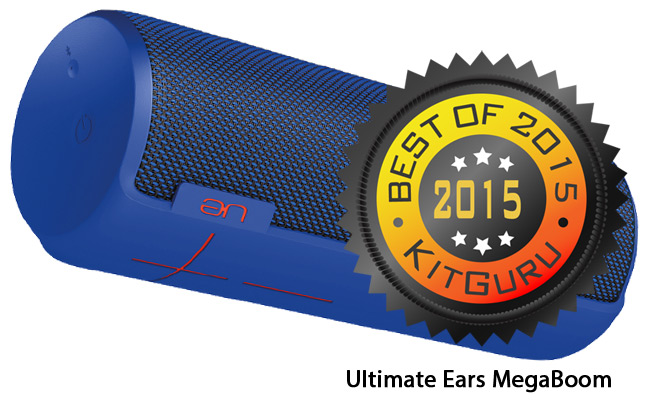 Microsoft, Unity and CD Projekt Red are the latest to pull out of GDC 2020

Just a few days ago, it was announced that GDC was still planned to go …