OK, so you’ve chosen your graphics card, motherboard and processor – at some point you are going to start thinking about the screen that you’re going to be looking at for the next 3 years. The improvement in affordable screen technology has been nothing short of stunning. Top companies like AOC offer 1080p screens with IPS technology for less than £95 and the Q2577PWQ gives you a 2560×1440 IPS screen for less than £220. All of which adds up to a great interface experience, regardless of budget.

Then we get to the KitGuru audience. When we surveyed almost 3,000 of you earlier in the year, 40% told us that you were going for a 4K screen next. That’s a significant number and the reduction in price for 4K screens that we’ve seen in 2015, means that our overall winner for this year’s awards is a 4K monitor.

Best 4K Screen
Ask Conan what’s best in life and you get a famous answer about crushing your enemies, seeing them driven before you and hearing the lamentation of the women. Ask KitGuru Labs the same question about monitors and we’ll list high quality IPS panels with 10-bit colour, G-Sync and a stand that pivots, tilts and rotates as you need it.

Then we get on to purity of colour – ideally straight out of the box – but we’re happy with some calibration as long as we get a perfect result. Our winning screen for 2015 was the Asus ROG Swift PG27AQ, which managed to tick all of our boxes at the start of November. At £720, it isn’t the cheapest 4K panel you will find in the market, but across a range of tests it was easily the best 4K screen we have seen for gaming.

While competitive gamers might want a 144Hz screen, you’ll need to wait for DisplayPort 1.3 to hit wide availability in 2016 before that’s a possibility with a 4K screen. This monitor offers the very best combination of the available technologies at a price point that would allow you to create yourself a complete ‘killer rig’ for less than £2,000 all in. That’s £400 less than the PQ321QE monitor when we evaluated it at KitGuru.

KitGuru’s choice for the Best 4K Monitor of 2015 is the Asus ROG Swift PG27AQ. 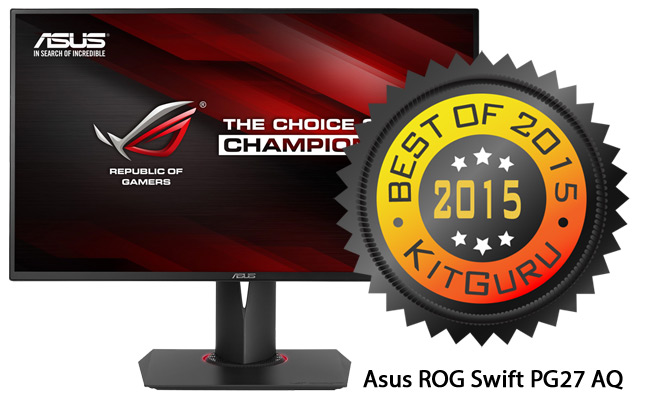 Best non-4K Screen
While G-Sync was a great innovation from nVidia, everyone loves an open standard approach to product innovation – enter AMD FreeSync for stutter/tear-free gaming.

When using a large screen, it’s nice to be have full tilt, swivel, pivot and height adjustment to help you get the perfect viewing angle. One of the new synchronisation technologies is ‘good to have’, but we also like it when a screen offers a refresh rate higher than 60Hz.

With the 27″ Asus MG279Q, you get all the adjustments you need, alongside FreeSync as well as a maximum 144Hz refresh rate when needed. Even with the largest of screens, there are still advantages to being able to rotate your monitor 90 degrees for Photoshop etc design work – or if you want to run a series of panels with something like EyeFinity for multi-screen gaming.

Adaptive sync monitors tend to carry a premium in terms of price. When we reviewed this screen, it was close to £480, but at its new price of £439 the Asus MG279Q can’t really be called expensive – considering the image quality, feature set and 3-year on-site warranty. When being picky, we noted that it doesn’t support HDMI 2.0, didn’t have picture-in-picture or support FreeSync past 90Hz.

That said, the ‘plus’ column was loaded with all the good things you could want from a screen, including FreeSync on an IPS panel, with the possibility to get up to 144Hz – and superb brightness/contrast. 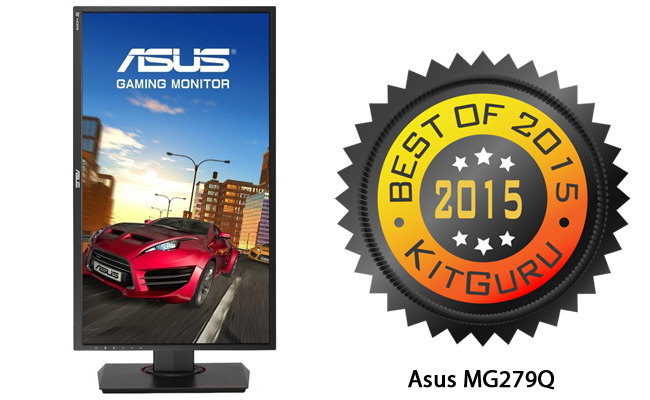 Best Value Monitor
While 4K screens are great value right now, many of us won’t want to spend much more than £200 on a screen. Until recently, that would mean a standard HD panel, but the latest price drops mean that you can now get a Quad HD IPS monitor under £230. Impressive?

Let’s check the exact specification that impressed KitGuru to give this panel a ‘Must Have’ award in June.

The AOC Q2577PWQ takes the popular 2,560×1,440 ‘Quad HD’ resolution and delivers it in a 25″ panel instead of the traditional 27″ format. The result looks great. The panel itself is one of the latest IPS designs, offering superior colour quality, brightness, contrast and a wide viewing angle.

With flexible options for tilt and pivot, the addition of height adjustment should make it easy to find the optimal position for your environment. A small ‘cable tidy’ bracket on the back makes it easier to keep your desk looking neat. It has a full range of connections, including an MHL option for Android phones. Straight from the box, the uncalibrated monitor achieved one of the best Adobe scores we’ve seen. After calibration, things got better and you would need an Apple 5K Retina display to beat it.

While the 5ms refresh is going to be slightly slow for pro-level gamers, mortals will be fine. Our ‘downside points included the lack of a USB hub and weak speakers, but in an enthusiast environment those points would be remedied with add ons.

Lastly, there was price. When we gave it a ‘Must Have’ award, it was 1 penny under £290. The £60 price reduction makes this a clear winner. 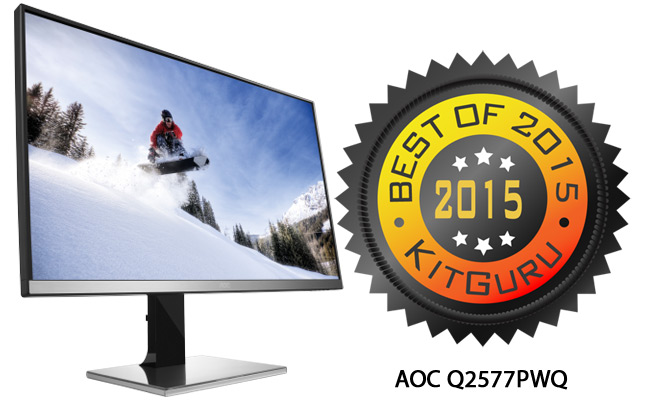