In 2015, we saw more memory kits inside complete systems than we looked at separately. The same is true for solid state drives. In each of these categories, the winner was clear from the first moment we saw the product.

We have been asked why we don’t spend more time looking at mechanical hard drives and the answer is simple: Performance levels between the main manufacturers are very similar – and a long way back from what you get with a solid state drive.

Then there is the price – with brands like SanDisk doing their part to push 960GB drives under the £200 mark. As a result, most KitGuru readers now look at mechanical drives as a back up solution – local or NAS.

While the hard drive industry isn’t 100% behind the BackBlaze report, the quarterly survey of the reliability of 50,000 drives is unique in its size and consistency – so probably worth a read if you need a mechanical drive.

Solid State Drive
The performance and form factor of the new M.2 drives means that they will play a massive role in the future of KitGuru reader systems, but – for now – most people are still using either a SATA III or PCI-Express model.

For most requirements, 400GB is ample in terms of primary storage – so when the stunningly good looking Intel SSD 750 arrived in the KitGuru Lab, the first tick boxes were instantly marked off. Next you need to look at ease of installation.

Fitting the Intel 750 was as easy as fitting graphics card – you just need to make sure you have the right kind of slot for maximum performance.  That slot will be important if you really want to kick data around at phenomenal rates.

In terms of reliability, Intel offers a full 5 year warranty, which shows confidence in the product. That brings us down to price. At launch, the 400GB variant was £369.98 from Overclockers and still picked up our top award. Checking earlier today, it was down to a much more competitive £225.

KitGuru’s choice for the Best Solid State Drive in 2015 goes to the Intel SSD 750. 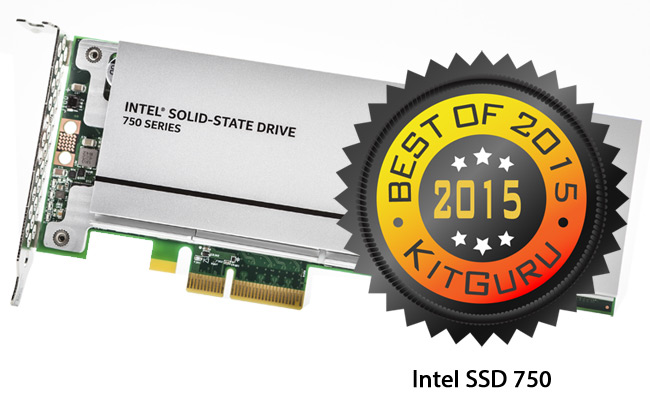 Memory Series
For the first time in years, we found ourselves sitting down for a discussion on the best memory series and Kingston was not on the shortlist. Instead, one name consistently came to the front for discussion. Corsair made its bones with the original TwinX paired memory concept. Brought to market at a time when increased frequencies, lower latencies and overall stability started to become more important, Corsair understood what was needed and it soon picked up a reputation for creating some of the biggest and most innovative heat spreaders with its Dominator series.

While Corsair’s 2014 products didn’t stand out enough to be recognised by our annual awards, its R&D team has driven the Vengeance LPX series forward and you can now buy 4,133MHz kits off the shelf for less than £300.

The pure aluminium headspreader does a great job in keeping temperatures under control for stability and the 8-layer PCB helps you to reach extreme speeds. Each module is individually screened for compatibility & performance potential – and is supplied with a lifetime warranty from stores like Overclockers UK.

KitGuru’s choice for the Best Memory Series in 2015 goes to the Corsair Vengeance LPX. 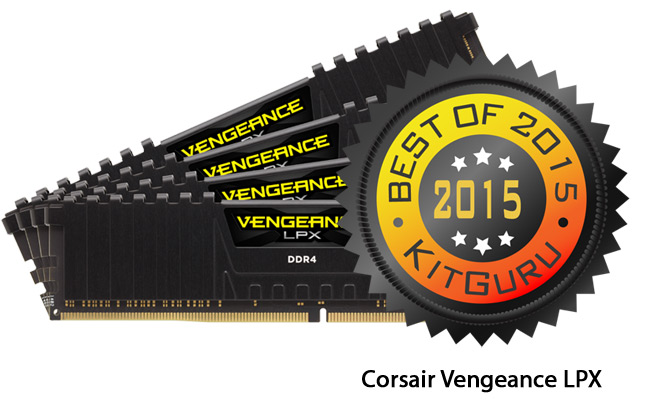 The Mafia series is arguably one of 2K’s lesser appreciated franchises. First released in 2002, …