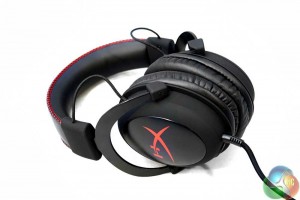 The Kingston HyperX Cloud itself is pretty understated. We like the matt black finish, punctuated by flashes of red on each earcup and along the edges of the headband.

The headphones are coated in that lovely soft rubber that you tend to find on the bodies of gaming mice. The central, somewhat glossy section in each one is actually brushed aluminium. 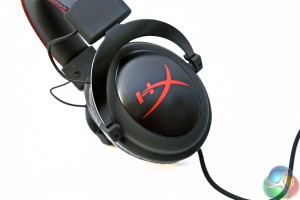 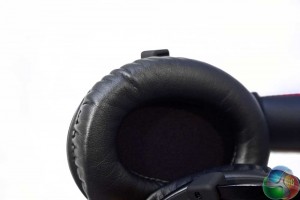 Within that metallic section is the HyperX logo, emblazoned in an eye catching red.

The Y shaped attachments just above it are also made of the same material, giving a uniform appearance to the whole thing. The fact that Kingston/QPAD have opted for aluminium for the main frame of the headset, rather than plastic, should mean it’s far stronger than your average pair of cans and theoretically should not creak at all as you move your head around.

The padding on the headphones is made of memory foam, with a default faux-leather covering, though there is a bundled option for velour instead, which also changes the interior of the earcup to a bright red. 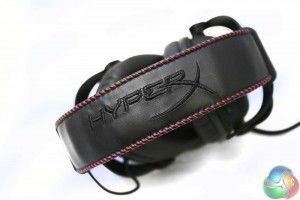 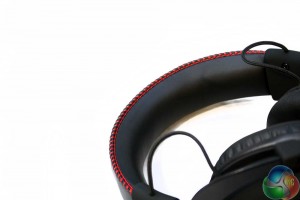 The headband is soft foam with a leather covering, but out of character with a lot of headsets, it’s stitched on, as is the HyperX logo. This doesn’t give it quite as flush a look as perhaps laser etched logos might, but it’s likely much more sturdy and won’t rub off with time. It definitely gives it a look and feel of quality, especially the very neat edge stitching. 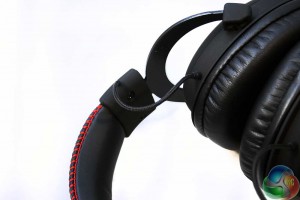 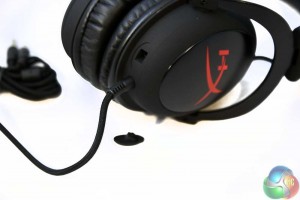 Instead of having the plastic of the headband extend down and connect directly with the earcups, the Cloud headset instead uses an external cable. This gives them a sort of open, minimalistic look and could theoretically improve overall strength.

Indeed the headset does feel sturdy in your hands, despite being very flexible.