In our gaming trials, where we pitted its skillset against the auditory landscapes of shooters, RPGs, atmospheric puzzlers and a variety of other genres, it performed brilliantly. Stereo panning was dead on, making this a great headset for games that rely on stealth or horror elements for atmosphere.

While it wouldn’t exactly compare to a true 5.1 headset (which are few and far between) or similar speaker system, this is about as good as you can expect from a two channel audio solution. 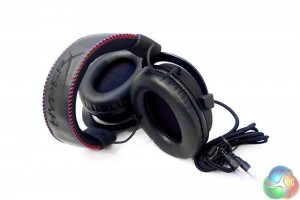 Similarly, sound effects like explosions, Tyre screeches and dialogue, were all rendered in a realistic way. There was never a moment when the drivers distorted and I always felt as if there was some dynamic range available, even at high volumes.

Equally as impressive was the ability to separate layered audio tracks, and to position various instruments and ambient noises within the sound field.

This dynamic range and articulation carried over well into the movies I listened to. I spent some time watching a couple of blockbuster movies using the Kingston HyperX Cloud and it was difficult to find any fault.

Next, we wanted to test the headphones out with a variety of raw WAV and compressed MP3 audio files.

The drivers err on the warm side of neutral, ensuring that digitally rendered audio doesn’t sound too harsh. That feeling of broad dynamic range and very low distortion helped to drive home the HyperX Cloud capabilties when dealing with demanding and complex audio tracks.

We tested with some studio grade audio files, designed to push drivers to the limits, especially when dealing with low bass frequencies. We were quite surprised to find that these headphones were able to produce a wide range of the test files, losing only when the audio frequencies ventured into ‘audiophile’ territory. You would need a high grade pair of Grado’s or Sennheisers to to score significantly higher than these headphones.

While the bass response is impressive, it is also incredibly tight, meaning that the horrible ‘wooliness’ often associated with poorly designed headphones is never an issue.

Fortunately too, this headset doesn’t disappoint in the comfort department. While there are perhaps a few others I would rank a little higher, the memory foam earpads on this are a joy to wear and the headband is perfectly cushioned. After several hours of testing, I had no ear fatigue, or overheating and there was no soreness to the top of my head either.

Mic quality was also commendable. Sound isolation could perhaps be improved a little, but overall we had little to complain about. Apart from a little background noise getting in the mix, my voice was accurately reproduced to a group of gamers online.