Google has giant data-centres spread across 200 countries worldwide, all connected by miles upon miles of fibre optic cables. With this infrastructure in place, Google is uniquely positioned to deliver a cloud gaming service. We saw the beginnings of this last year with Project Stream, which allowed testers to play Assassin’s Creed Odyssey straight from the Chrome browser.

Odyssey is the very first game confirmed to be available on Stadia but that just scratches the surface. There are already 100+ studios with Stadia development kits in-house. Google has its own Stadia Games and Entertainment first-party publisher in place, ran by Jade Raymond, who recently joined Google after a short run at EA. Not only will this publishing house produce first-party games, but it will also bring third-party titles to the Stadia platform.

Speaking of third-party partnerships, beyond Assassin’s Creed Odyssey, the service will include DOOM Eternal. Unfortunately, those are the only two games confirmed so far but we are told that more of the launch lineup will be revealed later this year.

The way Google sees all of this working is actually really cool. One scenario pitched involves watching a new game trailer on YouTube, then a ‘play now’ button appears and you can be playing that game instantly, with absolutely no downloading or installing required. Once you have a game streaming on one device, you can seamlessly pick up almost any other device and begin playing there, right where you left off. 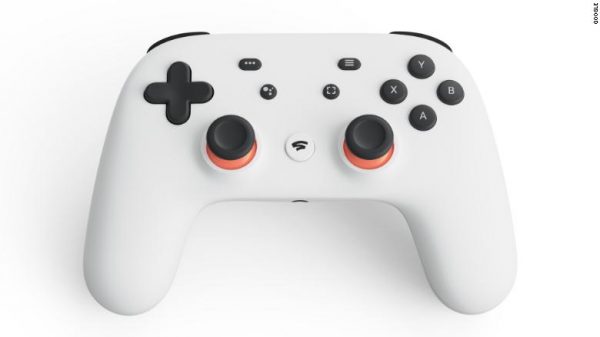 Stadia will support a range of peripherals too, including all current gamepads in addition to mouse/keyboard. With that said, Google will be releasing its own ‘Stadia Controller’, which looks a lot better in real life than it did on the patent that surfaced earlier this month.

The controller has its own capture button, allowing you to instantly upload and share game clips to YouTube. Naturally, there is also a Google Assistant button, so you can ask your controller for game tips at any point- although developers have to set this feature up themselves in order for it to work.

With Project Stream was being publicly tested, it was limited to 1080p/60fps but by the time Stadia launches, it will include support for 4K/60fps and looking to the future, 8K will also eventually be supported.

Interestingly, the Stadia platform will be based on custom hardware from AMD, similarly to current gen consoles. In terms of GPU performance, a single instance of Stadia can offer 10.7 teraflops of compute, meanwhile, the PS4 Pro and Xbox One X sit at 4.2 and 6.0 teraflops respectively. Google’s data-centres are scalable too, so if a specific game needs more horsepower, Google has the resources to provide that, meaning game developers don’t necessarily have to be limited to the constraints of consumer hardware.

In the case of DOOM Eternal, the full game will be playable at 4K/60 frames per second with HDR, assuming you have the home internet connection to support that.

Stadia will support cross-platform multiplayer and if developers choose, they can also set up dedicated multiplayer servers through Google, rather than using peer-to-peer, or setting up their own. The platform will also support split screen co-op and beyond that, the tools are there to allow players on multiple screens to instantly pull up a picture-in-picture feed of what their co-op partners are seeing, which could be particularly useful in squad-based games.

On the subject of game streaming, YouTube’s head of gaming took to the stage to talk about Stadia’s streaming features. Google wants to combine game watching and game playing. Part of this will be seamlessly being able to invite stream watchers to join your multiplayer game. This is called ‘crowd play’ and for streamers with large numbers of viewers, a queue system will also be in place, creating a massive multiplayer lobby and new ways for creators to engage with their viewers. Another interesting feature known as ‘state share’ will also allow gamers to save specific gaming moments, pack it into a link and share the section of the game with anyone. Clicking the link will allow someone to play through the exact same moment you experienced, creating a new way to share gaming content beyond recording it and uploading it.

There are still some unanswered questions surrounding Stadia, including network requirements, how big the game library will be, exclusive content etc. However, we do know that more will be revealed this summer, ahead of Stadia's launch in the US, Canada, UK and Europe later this year.

KitGuru Says: Stadia sounds very impressive from a technical perspective and Google certainly isn’t short of ambition. A lot of Stadia’s features sound awesome but as with any cloud gaming service, people will remain sceptical until they can see it working well on their own home networks. Unfortunately, there was also a lack of game announcements today, so hopefully we don’t have to wait much longer to hear more on that front. Did any of you watch the Stadia announcement presentation today? What do you think of it so far?