PlayStation has announced the list of games that will be joining its PS Now games subscription service next month. Starting on the 2nd of January, PS Now subscribers will be able to play Overcooked! 2, Uncharted: The Lost Legacy, and Horizon Zero Dawn : Complete Edition. These titles will be joining the 800+ PS4, PS3, and PS2 games already available on the service. Overcooked! 2 is a permanent addition to the service, while the other two titles will only be available for a limited time.

Horizon Zero Dawn released in 2017, to a very positive reception. This open world, third person title by Guerilla Games allows you to Take on the role of skilled hunter Aloy as you explore a lush world inhabited by mysterious mechanised creatures in this exhilarating blockbuster action-RPG. Nature has reclaimed the ruins of a forgotten civilisation, and pockets of humanity live on in primitive hunter-gatherer tribes. Their dominion over the new wilderness has been usurped by the Machines – fearsome mechanical creatures of unknown origin”. The game has since sold over 10 million copies. 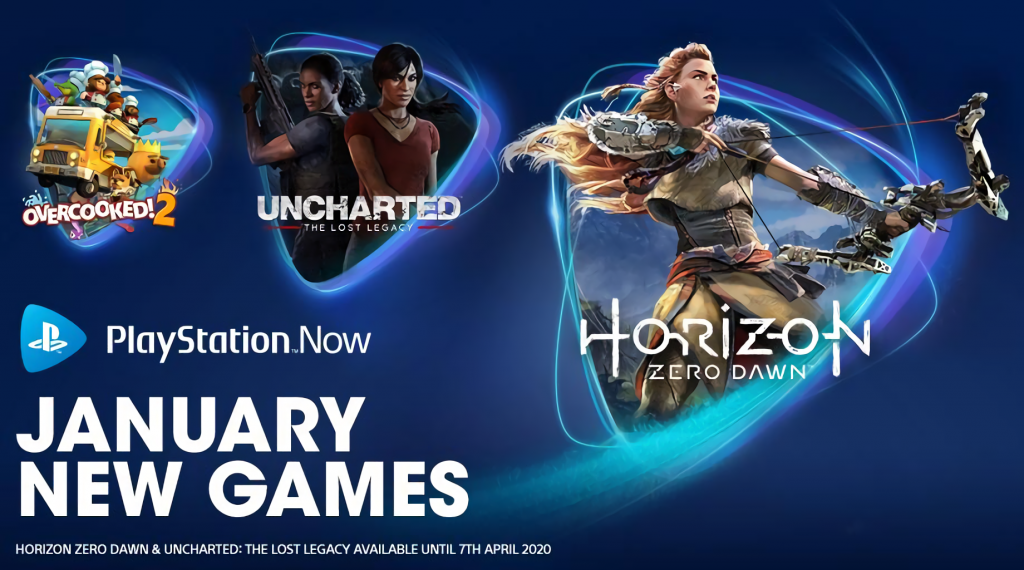 Uncharted: The Lost Legacy was created as a standalone adventure, in the wake of the conclusion of Nathan Drake’s story in Uncharted 4: A Thief’s End. Releasing in 2017, the game “follows fan-favourite treasure hunter Chloe Frazer on her journey to recover an ancient artifact and keep it out of the hands of a ruthless warmonger. Enlisting the aid of renowned mercenary Nadine Ross, they venture to India’s Western Ghats to locate the Golden Tusk of Ganesh. In her greatest journey yet, Chloe must confront her past and decide what she’s willing to sacrifice to forge her own legacy”. Uncharted: The Lost Legacy was positively received by both fans and critics alike.

The final addition for the month of January is Overcooked! 2. This sequel to the co-op cooking simulation game features more of what was loved in the first game – creative levels, and frantic gameplay. Overcooked! 2 has you “[j]ourney back to the Onion Kingdom and assemble your team of chefs in classic couch co-op or online play for up to four players”.

Overcooked! 2 appears to be a permanent addition to the service, whereas Horizon Zero Dawn and Uncharted: Lost Legacy will only be available until the 7th of April 2020. These titles will be joining the 800+ games available on PS Now, when they are added on the 2nd of January.