Infected phones in the US will see an FBI warning while people in Romania, the UK or other countries will see slightly different warnings. If your phone gets infected, it’s essentially rendered useless as it blocks access to the home screen, making it impossible to use other apps on the phone. 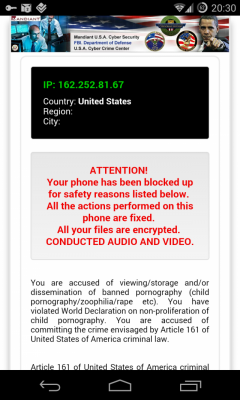 Phone functions will only be restored once an infected user pays a $300 fine through an untraceable payment method such as Paysafecard or uKash. This discovery has come a year and a half after Sysmantec found that Ransomeware rakes in $5 million per year.

Bitdefender Senior E-Threat Analyst, Bogdan Botezatu, said in an email to Arstechnica that “The ransomware’s main component is a browser view that stays on top of all other applications. You can press Home and go to the homescreen, but a timer would bring it back on top in about 5 seconds.”

The malicious package is automatically installed on Android devices when visiting certain adult websites. So far there have been 68 victims today, 12 in the UK, five in the US, 40 in the United Arab Emirates, six in Germany and the rest come from Poland and Italy.

KitGuru Says: Ransomeware is becoming an increasingly big problem as criminals get smarter at tricking gullible users in to paying fines and such. This isn’t just limited to Android phones either, Cryptolocker is able to hold PC hard drives hostage until users pay a $300 bitcoin fine. If you’re going to visit dodgy sites, it’s probably best to protect your phone with some Anti-Virus software.