One of the more exciting, burgeoning aspects of modern democracy, is the fact that people can organise far easier than ever before. That's why when Edward Snowden fled to China and eventually Russia in 2013, releasing documents on government spying that embarrassed and incriminated many agencies around the world, more than 167,000 people filed a petition requesting that the White House give him a pardon. Two years later, it's denied that request.

Until recently, it seemed that the White House had all but forgotten about the petition, which has been active since June 2013 and continues to see new signees on a daily basis. An official response has now been posted on the petition's page, stating that the matter was taken to presidential advisor on homeland security, Lisa Monaco. She stated quite emphatically that Snowden would not receive a pardon, because he made the “dangerous decision,” to “steal and disclose classified information.” 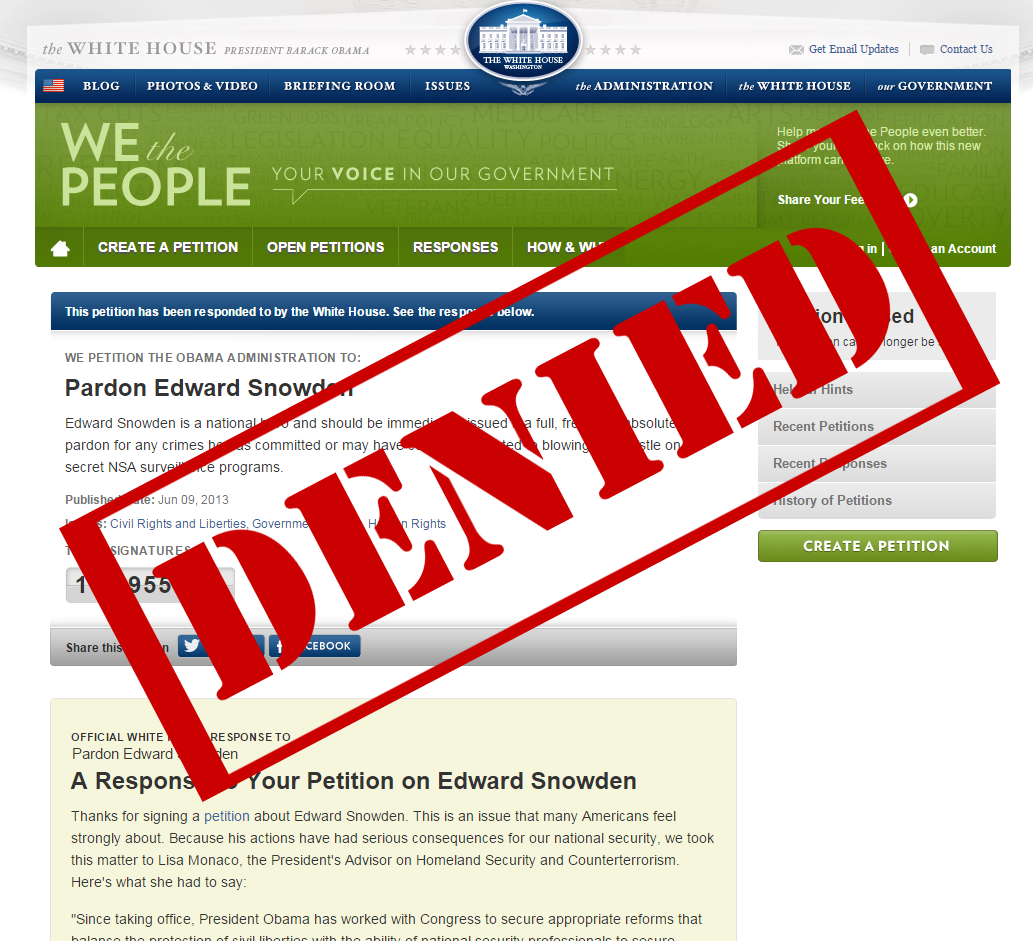 “If he felt his actions were consistent with civil disobedience, then he should do what those who have taken issue with their own government do: Challenge it, speak out, engage in a constructive act of protest, and — importantly — accept the consequences of his actions. He should come home to the United States, and be judged by a jury of his peers — not hide behind the cover of an authoritarian regime,” she said. “Right now, he's running away from the consequences of his actions.”

Although stated, the administration has yet to point out any serious consequences from Snowden's actions. Claims that spies' lives had been put at risk were rubbished by British diplomat Craig Murray earlier this year. It should also be pointed out that technically, Snowden didn't make any public revelations. He provided documents to publications like The Guardian and The Intercept, and they published their findings, with accompanying evidence.

Snowden has also said that he would return home to the U.S. if offered a fair trial. However, since he has been charged under the Espionage Act of 1917, that would not be possible. Under the act he is barred from arguing that his revelations were just, which means he wouldn't be afforded protection as a whistleblower.

KitGuru Says: For a president that talked up fairness and transparency, Obama has done very little to protect those that attempt to expose government wrongdoing. Snowden could have passed on his secrets to any number of enemy nations, or sold them for a sizeable sum, but he didn't.