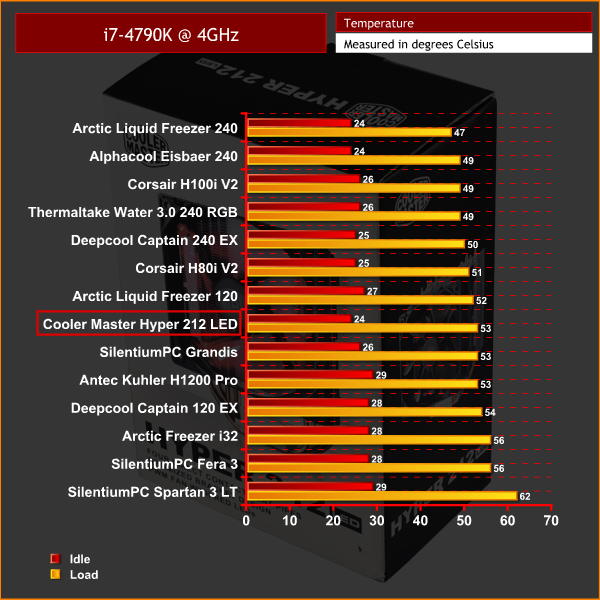 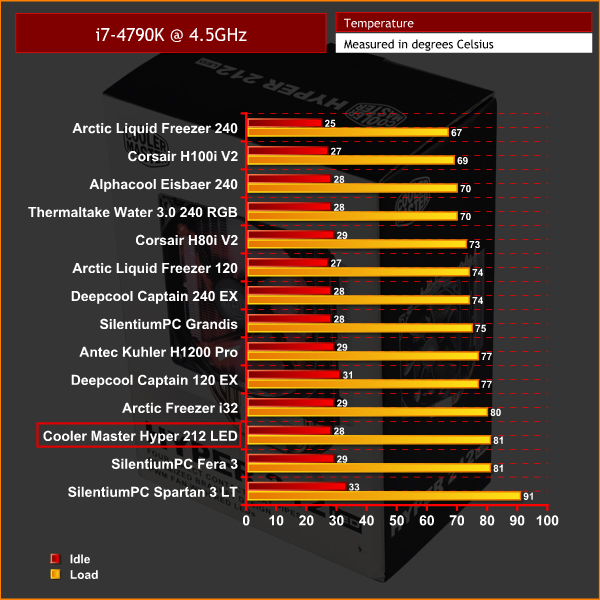 Firstly, it is worth pointing out most of the coolers in the above charts are liquid coolers – we have not yet built up a big collection of air cooler data, meaning the 212 LED’s position in the charts may not be the best reflection of its performance.

However, for an air cooler, it acquits itself very well.

With the CPU at stock clocks, it outperforms the 240mm Antec Kuhler H1200 Pro all-in-one – a very impressive result considering the 212 LED is a small air cooler that only costs around £31.

When overclocked, the performance is not quite as good and the Arctic Freezer i32 – a similarly-designed air cooler – actually betters the 212 LED’s result by 1 degree. Nonetheless, this is still very respectable performance for an air cooler.

What is so impressive about the 212 LED is how quiet it is.

When the system is idling, I simply could not hear the fan spin – and it was right next to me. Under load, the fan was still whisper-quiet, and I am confident it would not be audible in a case under your desk, for example.

When overclocked, the excess heat caused the fan to ramp up but it was still very inoffensive. The noise levels also benefit from the fact the fan ramps up slowly, rather than bursting into life at a high rpm. As such, it is easy to forget it is running as it slowly blends into the backgrounding, rather than suddenly announcing itself with a loud surge of noise.

Previous Crytek to shutter five of its seven studios
Next Could EU court ruling save us from Snooper’s Charter?