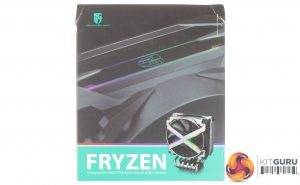 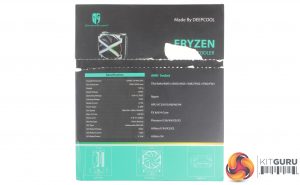 The Deepcool Fryzen coolers packaging is pretty interesting. The front displays just a small picture of the cooler, and the back some more detailed specification, but to open it you have to pull away a pre-cut cardboard tab. This did chew up the box a little. 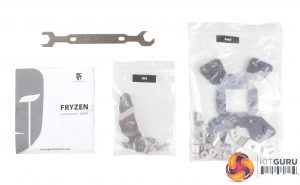 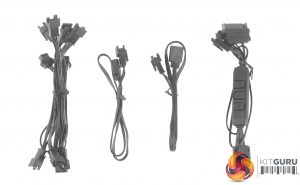 In the box, we find the cooler itself, and instructions for both cooler installation, and for all the lighting connections. A large accessories box, with mounting hardware for most AMD mounts, including TR4, and a whole host of cables as well.

The lighting is rated to support most software packs like Asus Aura Sync, AsRocks polychrome sync, Gigabyte RGB fusion, and MSI Mystic lighting so a couple of RGB LED adapter cables are included.

You get a couple of expansion cables as well, for connecting up extra LED strips or LED fans which is nice to see. A small in-line controller is also included which is great, allowing you to configure your lighting even if your motherboard doesn’t support an addressable RGB LED header. Some thermal compound and a wrench are also included, which will be required for installation. 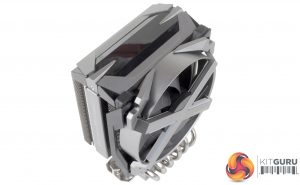 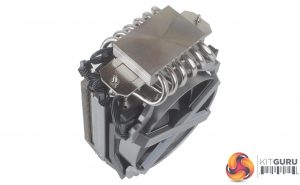 Looking over the build the fan does appear to be a standalone unit, something you could mount to say a PC case, but it’s so heavily built into the cooler it doesn’t strike me that it’s intended to be swapped out.

As the Fryzen features a number of RGBs, there are of course cables that need to be connected. On the cooler itself, you have one standalone 3 pin cable for LEDs at the very top of the cooler, and a second for the fan. The fan is also a 4 pin PWM model, so you can also expect a cable for connecting to your motherboards CPU header.