As the Gamerstorm Fryzen cooler is compatible with more than just the TR4 socket, you do get a back plate and a number of parts for sockets like AM4 and AM3. For TR4 you start with the four double threaded standoffs, which need to be screwed into the socket mounts. 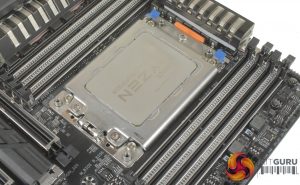 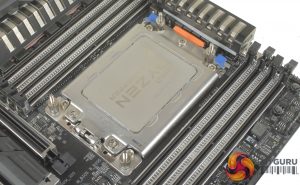 With these in place, there are two larger brackets which need to be placed above and below the socket. Conveniently these are identical, and also feature little arrows on top to direct their orientation during installation. These two brackets can then be bolted down using the four smaller thumb nuts. You can then apply your thermal paste, and mount the cooler atop your CPU.

There is a large bracket preinstalled which passes through the center of the cooler, so it’s just a case of lining up the two screws, with the holes on the now installed bracket. 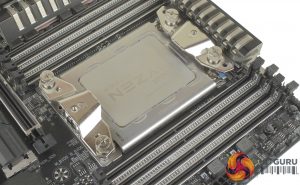 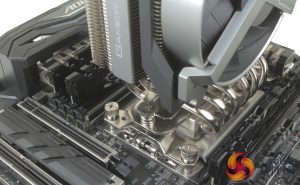 The included wrench does make tightening the retention screws quite difficult, but using a screwdriver is quite a bit easier. The mounting screws are for a Philips head driver and using one really speeds up the installation process.

With the cooler mounted, you just need to connect the two 3 pin RGB cables up, I used the included controller for this that also requires a SATA power connection, and then the 4 pin PWM cable can be connected to your motherboards CPU fan header.

With the cooler being quite narrow, even with the installed fan, there is full clearance for installing RAM, even high profile. The cooler doesn’t overhang any of the memory slots so there are really no issues with clearance whatsoever. 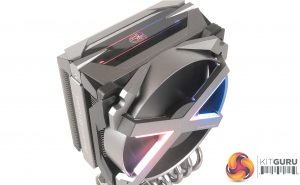 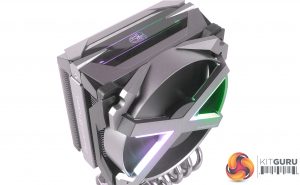 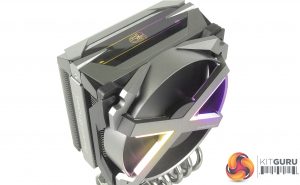 Taking a look at the included lighting it actually looks pretty good. Colours transition between each other really smoothly, and even from the top of the cooler into the fan. There are enough LEDs to light up the cooler but it’s not overpowering, and I did find it looked best in a darkened room.

The controller works really well and gives you access to a bunch of different effects, and colour transitions. In total, you get a full 36 different options to choose from split into 5 effect groups deep cool, describe as dynamic, static, breathing, comet, and fashion collision. Some of the cooler effects turned out to be simple transitions from one colour to another. The colours picked are very complementary, and shouldn’t have any trouble matching the rest of your system.