Ahead of Intel’s 9th generation release, benchmarks have been spotted showcasing the impressive performance of the all-but-announced Core i7-9700K. While impressive speeds are often achieved using liquid nitrogen, overclockers have supposedly managed to boost Intel’s upcoming CPU as high as 5.5GHz across all 8 cores simply using water-cooling.

According to the leaked benchmark screenshots from Chinese site CPU.ZOL, not only were the tests conducted using water-cooling, but also utilising ASRock’s Z370 Professional Gaming i7 motherboard rather than a Z390 chipset. While the Core i7-9700K is meant to ship at a single-core 3.6GHz base clock and 4.9GHz boost clock, overclockers seem to have pushed the 8-core, 8-thread processor up to 5.5GHz across all of its cores.

It’s presumed that the tests ran the voltage at 1.536V, which often isn’t sustainable for daily tasks, likely confining this achievement to benchmarks and overclocking. In a more grounded manner, Intel has pegged the Core i7-9700K for 4.8 GHz in dual-core, 4.7 GHz in four cores and 4.6 GHz in any operation using 6 to 8 cores. 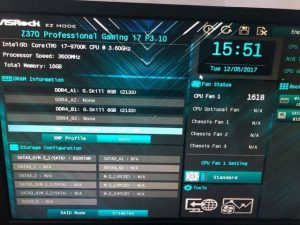 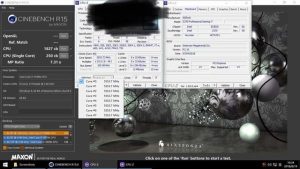 Cinebench R15 scores place the Core i7-9700K close to AMD’s Ryzen 7 2700X with a score of 1827 in multi-core tests and 250 in single-core. This shows the Coffee Lake refresh to fare approximately 200 points and 30 points better than the Core i7-8700K in multi and single-thread tests respectively.

Intel is rumoured to launch its flagship 9th generation processors in October, followed by the rest of its line-up leading into 2019.

KitGuru Says: We’ve known for quite some time that motherboard manufacturers had plans to enable 9th-generation support on existing Z370 chipsets, but it wasn’t clear that such achievements would be possible without a newer board. Still, enthusiasts should temper expectations as this remains a distance from becoming the norm in everyday performance.