We've already covered the latest laptops to be announced by ASUS, but the company's component arm has been hard at work too. The PG32UQ is, according to ASUS, ‘the world’s first 32 -inch HDMI 2.1 gaming monitor', with a 4K IPS display running at 144Hz. 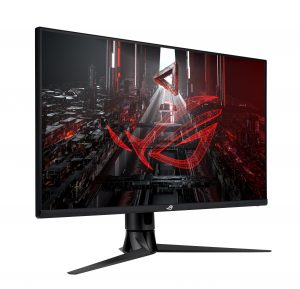 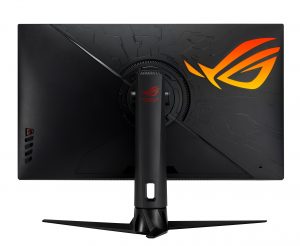 HDMI 2.1 is becoming more and more prevalent, and now ASUS has joined the party with the ROG Swift PG32UQ. This 32in screen offers 4K resolution and 144Hz refresh rate, and it is marketed towards both PC and console gamers. Both its HDMI ports are of the 2.1 variety, so you could connect the latest GPUs from AMD and Nvidia, as well as a PS5 or Xbox Series S/X console at the same time. HDMI 2.1 also provides native variable refresh rate, and ASUS says the screen is AMD FreeSync Premium Pro compatible while G-Sync Compatibility certification is ‘in progress'.

In terms of the IPS panel, ASUS claims 160% sRGB coverage and 98% DCI-P3 gamut coverage, so you shouldn't have any issues using this for work as well as play. ASUS' Variable Overdrive technology also sounds very nifty, automatically applying the ‘right' amount of overdrive ‘even as frame rates change over time'.

Being ASUS ROG, there's RGB lighting on the rear of the screen, while ASUS' GamePlus and GameVisual OSD feature are also present. 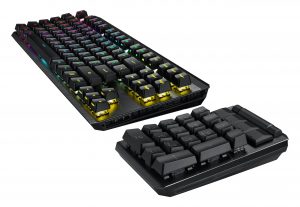 ASUS also announced the ROG Claymore II keyboard, the long-awaited successor to the original Claymore we reviewed back in 2017. ASUS says this is ‘the first mechanical RGB gaming keyboard to feature ROG RX Blue Optical Mechanical Switches', which use a hollow-square stem design and integrated RGB LEDs. There's supposed to be ‘near-zero' debounce delay as a result of the optical switches, while ASUS also emphasises the ‘wobble-free keystrokes' as a result of the hollow-square stem, X-stabilisers and keycap corner latches.

As with the original Claymore, the num-pad is detachable and can be positioned on either side of the keyboard. This num-pad is home to four media control keys and a volume wheel, while a magnetic wrist-rest also comes included. A key change compared to the original, however, is the fact the Claymore II is now wireless. It can be used in wired form, via USB-C, but it also makes uses of a 2.4GHz connection and 4000mAh battery which is rated for up to 40 hours. 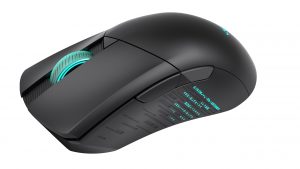 Lastly, the latest iteration of ROG's Gladius mouse was unveiled, the Gladius III Wireless. With a whopping 19,000 DPI sensor, the Gladius III offers wired, 2.4GHz and Bluetooth connectivity. It retains hot swappable switch sockets, as found on the original Gladius and Gladius II, but these now support ‘both traditional 3-pin mechanical and 5-pin Omron optical micro switches'. ASUS is claiming a ‘zero-click' latency, while the new ROG Paracord cable should be an improvement over the previous design. The Gladius III also sports ‘100% TPFE ROG Omni mouse feet'. Both wired and wireless versions will be available.

KitGuru says: I do quite like the look of the Gladius III Wireless, but there's no doubt the PG32UQ was the star of the show.